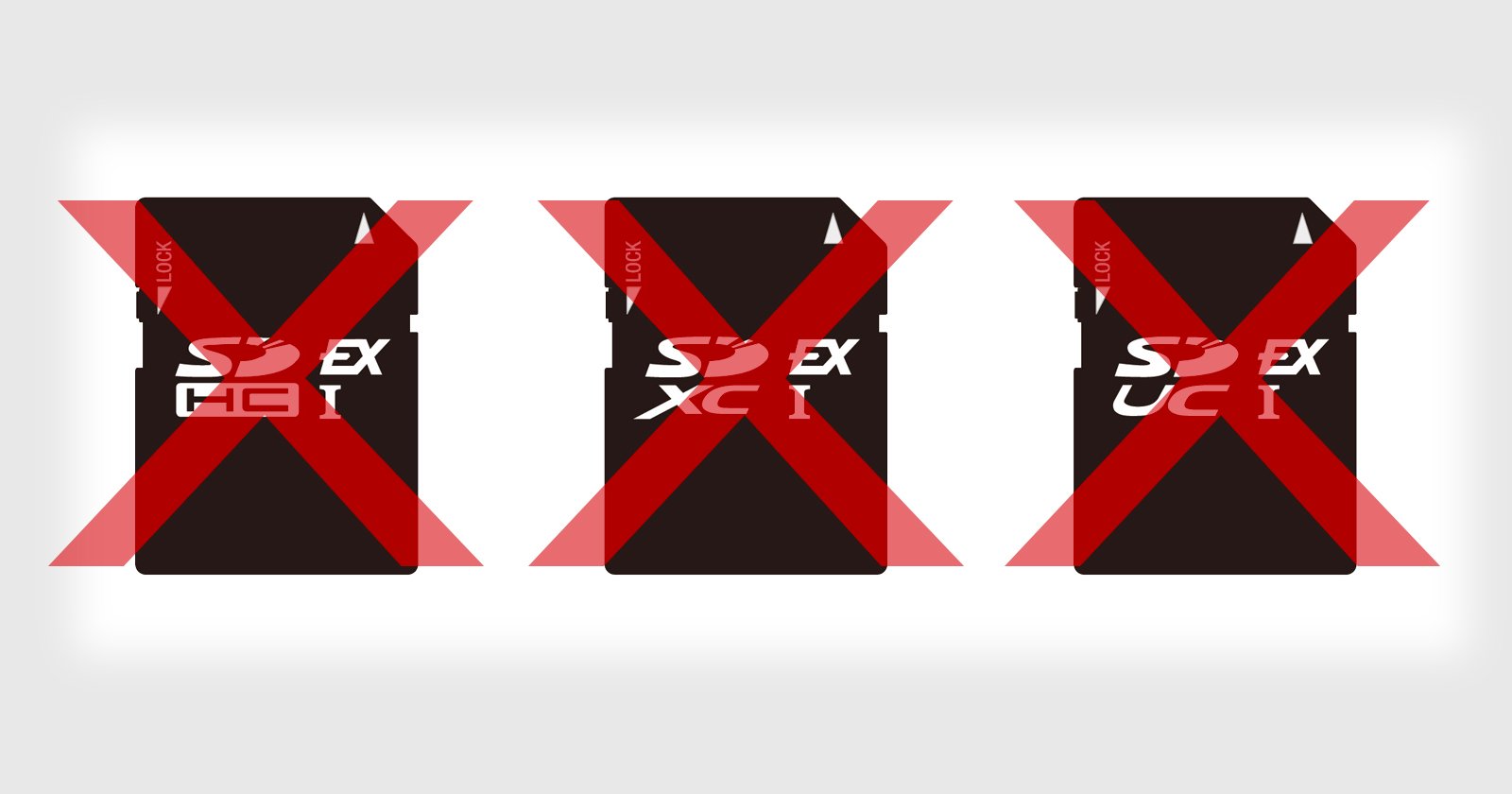 Though we went into great detail recently into why the SD card isn’t going anywhere anytime soon, the format’s days are likely still numbered. Positioned as a response to CFexpress, the SD Association published an initiative about a year ago for the next generation SD card called SDexpress (SDx).

Boasting up to 1 GB/s speeds, expanding the maximum capacity to 128TB on a single card, and keeping the same form factor as the current SD card along with promises of backward compatibility, SDexpress seems at first like no brainer. Unfortunately, this standard is unlikely to move out of the specification phase.

“The SD association tried to position the SD standard around the emerging PCIe interface adoption by especially the CF association,” Wes Brewer, the CEO of ProGrade Digital, tells us. ProGrade Digital is one of the leading professional memory card companies in the United States, founded by former Lexar members who were determined to continue that legacy of excellence after Micron sold the brand to Longsys.

“They came out and made a design that was compatible form-factor wise with the SD card, but it only supports one lane of PCIe. So it’s a bit inhibited for the maximum potential that PCIe brings to the industry,” Brewer says. “They really just bolted a single lane of PCIe onto the form factor of an SD card.”

“It is only backward compatible to UHS-I in terms of the SD standard… You can put it in there, and it’ll work, but it’ll only work as a UHS-I card.”

Still, that one lane would bring considerable speed improvements to the SD form factor, a card that is currently reaching the limits of its design capability. Even though it would only be a single lane of PCIe, it would still match the maximum capability of CFx Type A, a single lane PCIe card that at least one camera company is already currently moving forward with an impending design.

Since CFx Type A is an entirely new standard without the SDx card’s ability to be backward compatible, SDx would seem to be well-positioned to compete.

Unfortunately, there are downsides with SDx that are limiting its appeal. Though it is backward compatible, there is a compromise: if you were to use an SDx card in a current SD camera or computer, the card wouldn’t be able to reach the maximum potential of that current state-of-the-art SD port.

“It is only backward compatible to UHS-I in terms of the SD standard,” Brewer explains. “You can put it in there, and it’ll work, but it’ll only work as a UHS-I card. So if the camera requires full SD UHS-II performance, it won’t work right. It won’t work as well as it’s supposed to like an SD UHS-II card would work.”

That means that cameras like the Panasonic S1R, S1, or S1H would not be able to write fast enough to an SDx card to shoot photos at their top-rated specifications. Even older cameras like the Lumix GH5 wouldn’t be able to reach their maximum specifications. 4K video capture and even some 1080p video capture would not operate at all. Sony’s a9, a9 II, and a7R IV would also see huge dips in performance, with the wait times to empty the camera’s buffer ballooning from a few seconds to a few minutes.

“They really just bolted a single lane of PCIe onto the form factor of an SD card.”

That’s not even the end of the complications. In order to be backward compatible, the card and the host device (like a computer or camera) have to be able to communicate.

“It’s more complicated for the host as well as the card maker because if you want to support both standards you have to support two basic controllers in every device: in the card and the camera,” Brewer says. “And that’s more expensive.”

You can read more about what memory card controllers do on the SD Association’s website here. Currently, only one controller is needed in a card and one in the host device in order for a memory card to work properly. In order to support backward compatibility with the SDx card, that number would have to double.

“I think it’s compromised on both sides in terms of what the Compact Flash Association Express Type B is bringing to the party with two lanes,” Brewer tells us.

Though compromised, you would think that SDx would still hold some appeal for camera makers, since customers would still appreciate a memory card that can cross generations for years to come.

Unfortunately, that doesn’t appear to be the case.

“From what we can see right now, it’s not getting much traction, if any,” Brewer said. “We have seen fewer people asking for SDexpress in favor of CFexpress. I haven’t spoken to any camera manufacturers who are interested in [the SDx] standard.”

It should be noted that ProGrade Digital doesn’t really have a “dog in the fight” when it comes to supporting a CF Association or SD Association standard. While they do provide feedback to both organizations and work within the standards set out by both, the decision of what products to produce to those standards are more in response to camera manufacturers who demand support for future products then it is them deciding what they want to make.

With SDx failing to reach popularity among camera manufacturers, the next logical question would be to ask: “What about microSD?” Though SDx clearly has downsides that can’t be overcome, microSD is a format that is still extremely popular. What is the future of the tiny memory card? We posed that question to ProGrade, and Mark Lewis, their Vice President of Marketing, was happy to provide some insight.

“I think that for the most part, microSD will stay around in some phone and action cameras and lower-end drones,” Lewis said. “You do see the higher end drones using removable SSDs and other storage so that could continue to shift as recording levels go higher in those devices. We have a V60 rated microSD card today and we put that through our standard SD card testing (in the adapter) so that we know it can match the speed and reliability of our SD V60.

“So in other words, we don’t just test it in action cameras and drones, we test it in DSLRs, etc. Honestly, today not many people value a V60 rated microSD card so I’m not sure that they need to get faster.”

Looking to the future, Lewis mentioned to us in our last piece that they believe the eventual replacement for SD will be CFx Type A, a smaller, single-lane PCIe card. The same might be true of microSD.

“The CFx Type A is between the size of a microSD and SD, so it is conceivable that we will see a shift to that form-factor in some devices,” Lewis says. “But if you think about the higher-end drones that are using SSDs, it is not likely that they will move to a one-lane CFx Type A card; they would probably need a CFx Type B.”

Though they have a much smaller use case, Lewis also considered 360-degree cameras.

“Then there are the 360 cameras, some of which take microSD today,” he says. “Those require a lot of memory and effort on the software/processing side and those could shift to another form factor like CFx Type A or B.”

In the end, while SD currently is the top dog of memory, without a future-proof, camera-manufacturer-supported successor to the standard, it will eventually wane in popularity. Unfortunately for the SD Association, their response to CFx doesn’t appear to be resonating with camera makers, which puts the standard in jeopardy of fading out of existence — at least within our industry.

While there are reports that other industries are more keen on SDx than the photography industry, don’t get your hopes up for seeing the new format in forthcoming camera designs.