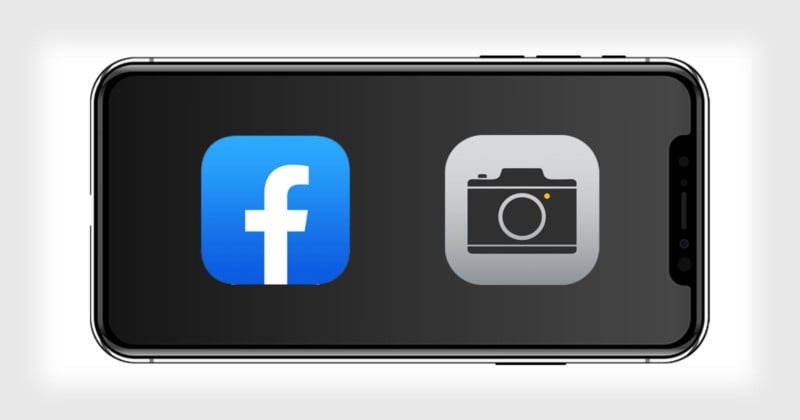 Heads up: your Facebook iOS app may contain a “bug” that turns on your phone’s camera without you asking it to as you’re scrolling through content in the app.

CNET reports that some people have been taking to social media to complain that Facebook’s app quietly activates their phones cameras in the background and switches to the camera unexpectedly. The earliest report seems to be from November 2nd:

Today, while watching a video on @facebook, I rotated to landscape and could see the Facebook/Instagram Story UI for a split second. When rotating back to portrait, the Story camera/UI opened entirely. A little worrying… pic.twitter.com/7lVHHGedGf

Facebook app on iOS 13.2.2 opens my phone’s rear camera when I open a profile photo swipe down to return (look at the little slit on the left of the video). Is this an app bug or an iOS bug?? @facebook @AppleSupport pic.twitter.com/WlhSXZulqx

The camera activation seems to be happening while users scroll through videos or swipe through photos.

“After people clicked on the video to full screen, returning it back to normal would create a bug in which Facebook’s mobile layout was slightly shifted to the right,” CNET reports, stating that it was able to replicate the issue. “With the open space on the left, you could now see the phone’s camera activated in the background.”

Guy Rosen, Facebook’s Vice President of Integrity, responded to concerned users on Twitter yesterday by stating that this seems to be a new “bug” that was introduced in v.246 last week. He also states that although the camera is being quietly turned on, Facebook isn’t secretly shooting photos or videos and saving that content.

Thanks for flagging this. This sounds like a bug, we are looking into it.

We recently discovered our iOS app incorrectly launched in landscape. In fixing that last week in v246 we inadvertently introduced a bug where the app partially navigates to the camera screen when a photo is tapped. We have no evidence of photos/videos uploaded due to this.

We recently discovered that version 244 of the Facebook iOS app would incorrectly launch in landscape mode. In fixing that issue last week in v246 (launched on November 8th) we inadvertently introduced a bug that caused the app to partially navigate to the camera screen adjacent to News Feed when users tapped on photos. We have seen no evidence of photos or videos being uploaded due to this bug. We’re submitting the fix for this to Apple today.

A look at the version history for the Facebook app in the Apple App Store shows that version 247 was indeed released yesterday with “bug fixes,” and one of those fixes presumably removes this camera issue.

Facebook has had its fair share of privacy controversies in recent times, and bugs like this certainly don’t help the company in its efforts to improve its image. This latest issue does seem like a simple bug, but if you’re concerned about it, make sure you’re running version 247 that was released yesterday.