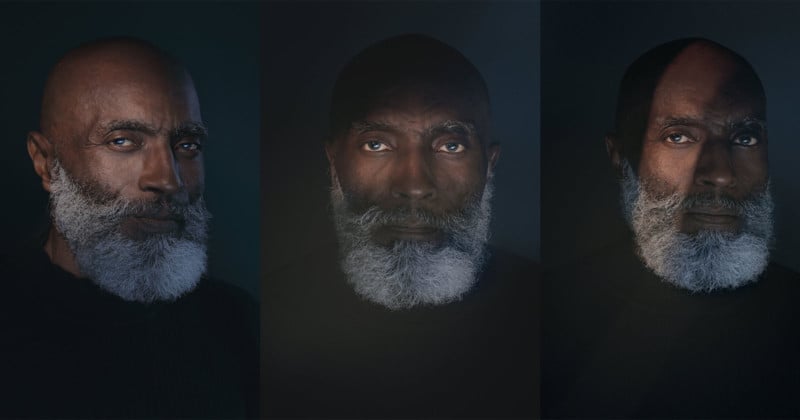 A snoot is a hard modifier that pushes light into a focused, narrow beam. An optical snoot includes a lens. That lens allows you to further control where light falls on your subject. It also allows you to define how sharp the line is between where the light falls and where it does not.

Many optical snoots include a slot where you can place a film slide or metal insert ( also known as a “gobo”). The film slide allows you to project an image onto a surface. The gobo allows you to further shape the snoot’s beam of light.

An Andoer SN-29 optical snoot and 50mm lens were used to make the portraits above. This snoot acts as the key light. In the first image, a circular gobo was used to restrict the light to only the upper right side of the subject’s face. The snoot’s 50mm lens was defocused. This made the edges of light less pronounced. In the second image, a rectangular gobo was used to restrict light to the subject’s eyes. The beam was also defocused. In the third image, the same square gobo was used. This time the beam was focused. This created a sharp light beam that starts at the bottom of the frame, frames the subject’s right eye, and then fades into darkness near the subject’s forehead. This light was covered with a full CTO gel (actually, two Half CTO gels). This reduced the color temperature of the daylight strobe to 3200 kelvin (more on this later). 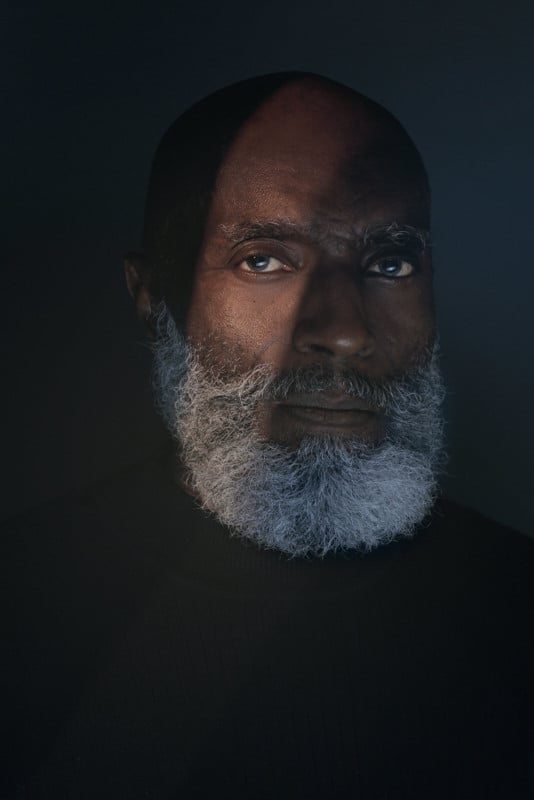 A 47” Godox stripbox soft modifier was positioned beneath the subject. This fills the large shadow area created by the snoot. It also creates an attention-grabbing reflection in the subject’s eyes. This fill light pumps out un-gelled 5600k strobe light. It’s 3 or so stops below the key light. A 5600k 35” stripbox with a grid was placed camera right to create a rimlight.

All three lights are 600ws Orlit RT 610 TTLs. For this kind of image, a fairly powerful strobe with a modeling light is key. An optical snoot eats a lot of light. A gel further reduces light output. The 600ws strobe allowed me to light the subject while shooting at a narrow f-stop. The narrow f-stop allowed me to maximize sharpness and depth-of-field. This ensured both eyes were in focus. The strobe’s modeling light allowed me to precisely place where the narrow beam of light fell.

A Canon 6D and Canon EF 85mm f/1.8 (f/8.0, 160th, ISO 100) lens were used. The 6D was released in 2012. For all the advances made in recent years with mirrorless and DSLR cameras, I continue to be impressed by the 6D’s image quality. The 85mm is also no slouch. It’s sharp at f/1.8 and absolutely brilliant at f/8.0. Oh yea. The camera’s white balance was set to a cool 3200k. This made the orange-gelled light from the snoot appear near-neutral while the daylight-balanced fill and rim light fell to a lovely cobalt blue.

Finally, the most important part of the picture: Ronald. Interesting people make interesting photos. Ron works at my local Whole Foods. He is 65-years-old and far more fit than most people half his age. He has blue-grey eyes. He grew up on the Southside of Chicago and used to box. His hands are made of granite. When he first bumps me, my hand hurts.

For more than a year, we’d see each other at WholeFoods and promise to get together to make photos. We finally did. 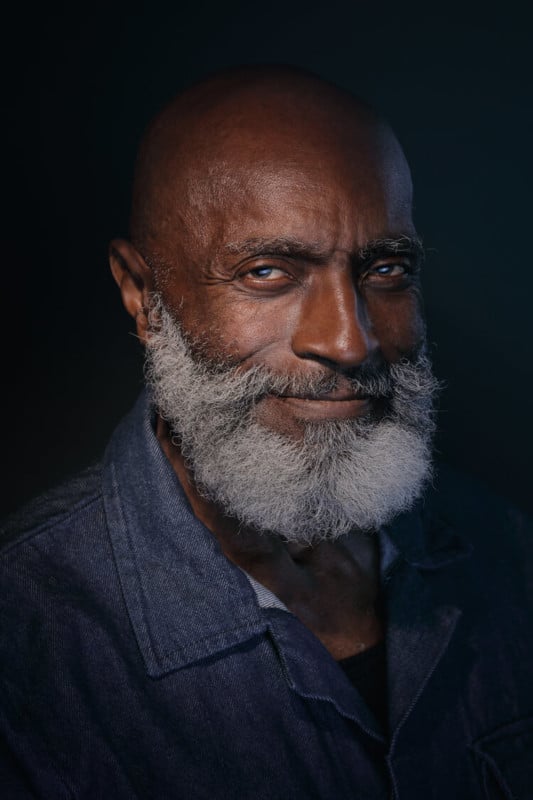 I told Ron I wanted to pay tribute to his epic beard by creating a portrait inspired by one of my favorite photographers, Yousuf Karsh. “The one of Hemingway?,” Ron asked.

Adobe Unveils Photoshop Camera: The Magic of Photoshop in a Camera App

Photoshop on iPad Isn’t Complete, But Adobe Promises it Will Be — Do You Believe Them?