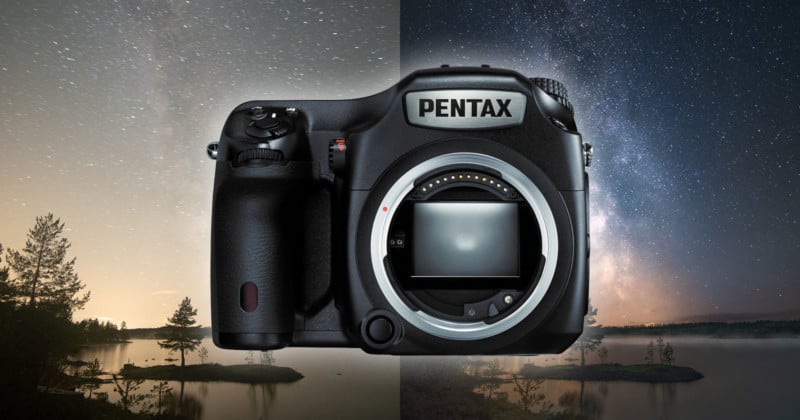 For several years I had believed that shooting a medium format camera at high ISO would yield terrible results. Most likely there would be no point in trying, I thought. However, a few days ago I nevertheless brought the Pentax 645Z and the Pentax 25mm f/4 out into the darkness where the zoombies reign — in my imagination anyway.

I would have loved to have an ultra-wide-angle f/2.8 lens on the 645Z. That would assuredly have been an advantage. On the other hand, many claim that a larger sensor with larger pixels will capture more light, so perhaps an f/4 lens can work after all…

How did the 645Z fare? And did I survive the relentless attacks from the zoombies? Let’s find out.

Full disclosure: I am a Pentax Ambassador and therefore may be accused of being biased. But I’ve made an attempt at being objective, and hopefully the images below speak for themselves.

The following image is shot at ISO 6400, and this is the straight-out-of-camera version.

Here it is after being edited in Lightroom (I’ve promised myself to learn Darktable): 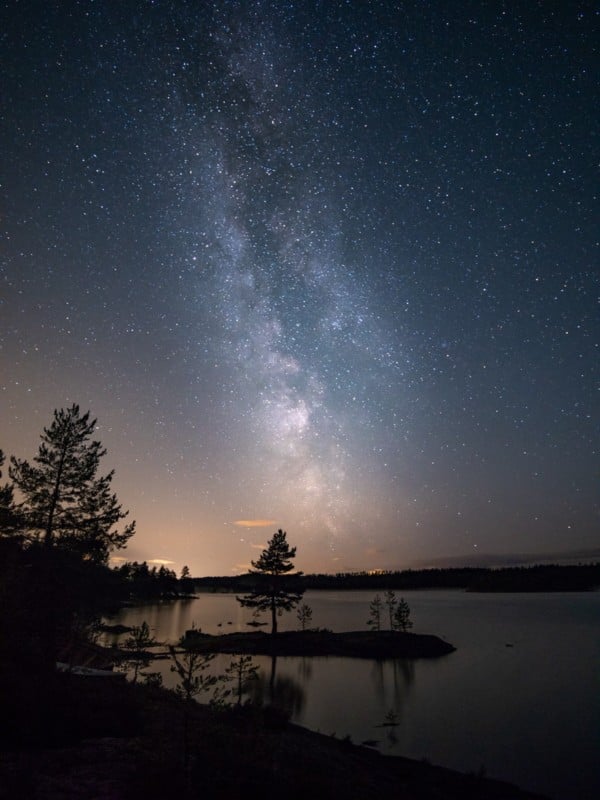 When trying to open up the shadows further, the foreground in particular turned magenta — something that is easier to see in Lightroom than on this webpage. I guess you just have to believe me.

I have to admit I was a tad disappointed when I saw this color shift in the deepest shadows. It isn’t difficult to rectify (for example, by painting over with the opposite color), but it is always more convenient to not have to. In all honesty, I have witnessed deep shadows turn magenta with the Canon 6D which is considered a very decent high ISO camera, and even the Pentax K-1 when pushed hard at high ISO.

For some reason, I believed a medium format camera would behave differently. The K-1, by the way, displays an amazing dynamic range at around ISO 100. 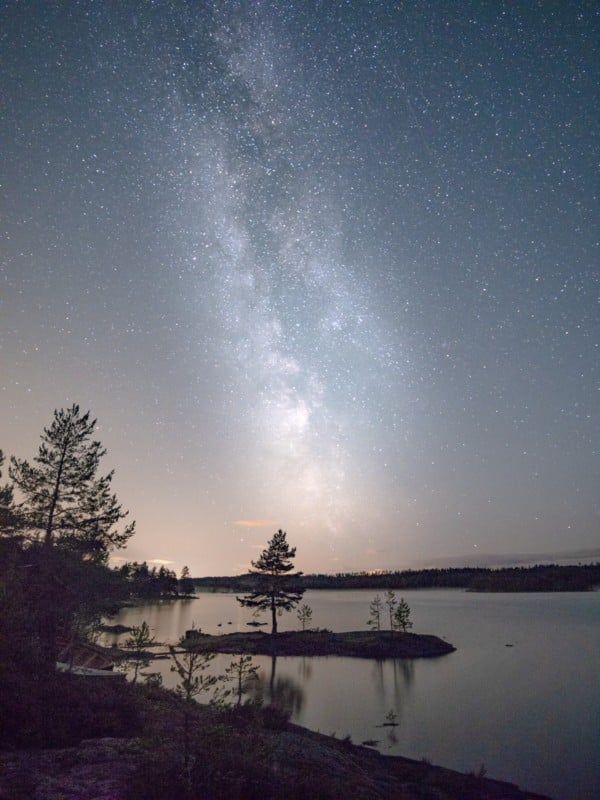 Fortunately, I had my darkness paranoia reasonably under control this evening so that it became possible to shoot a 125-second exposure for the shadows. Otherwise, the same settings as the sky exposure.

Straight out of camera: 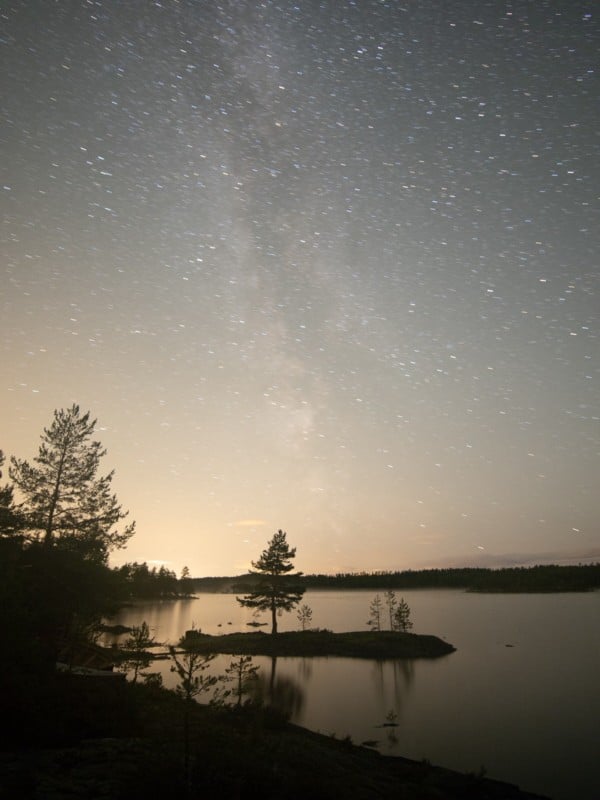 Adjusted in Lightroom (I haven’t forgotten about Darktable): 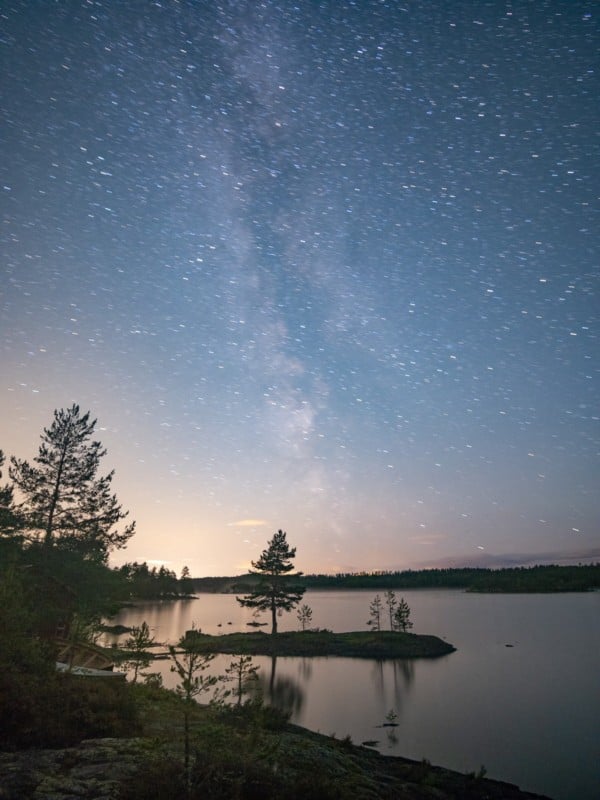 I also wanted to test out what would happen if I shot ISO 12800. Well, this happened:

When starting to push the file in Lightroom I got some weird color shifts in the foreground. It is not unlikely my headlamp is partly responsible for this. I didn’t turn it off while the exposure ran due to some very fierce zoombie attacks around that time. Even with my back to the camera, some light has leaked into the foreground. I opted to create a virtual copy of the file where I desaturated the foreground. After blending the two images in Photoshop I added a slight blue tint to the foreground. Below is the finished image. I honestly had no idea when I started out editing that such a result would be possible at ISO 12800. I have of course added some noise reduction here and there, but considering the high ISO, the file was surprisingly “clean” from the outset. 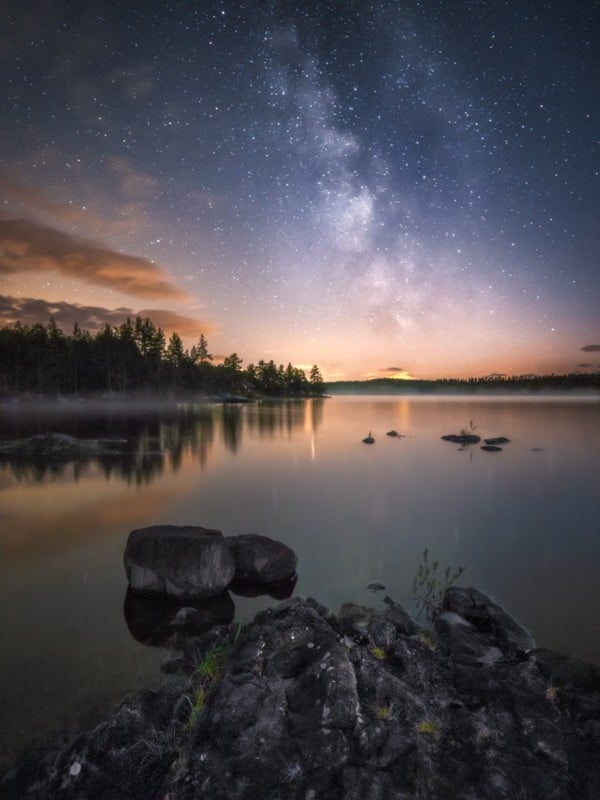 Please note that by adding a Dark Reader extension to your browser it is possible to view the images on a dark background….something which basically all images deserve.

And by the way, I survived but have hired bodyguards for the next time I head out to shoot the night sky. The pay is extremely low, but it is an exciting and suspenseful job.

Lessons from My First Photography Trip