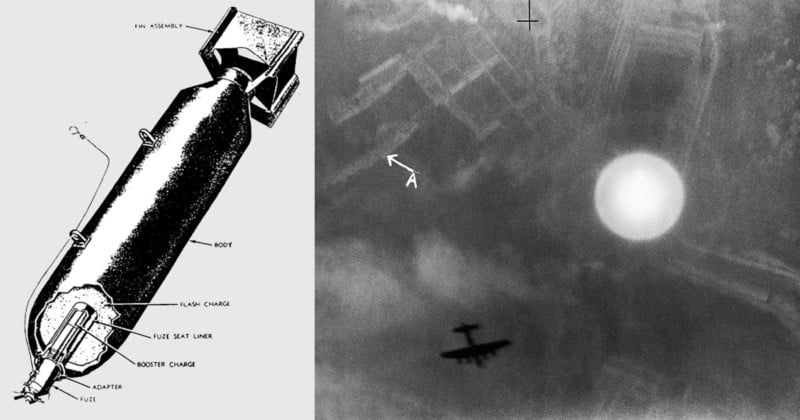 Digital cameras can see in color in near darkness these days, but decades ago, there were very different solutions for capturing usable photos at night. One example is the photoflash bomb, a special type of bomb that was designed specifically to explode in midair and illuminate the world below for aerial photos.

The photoflash bomb was commonly used by military spy planes to capture images of the ground at night from higher (and safer) altitudes.

From the outside, they looked like ordinary explosive bombs, but instead of being filled with traditional explosives, photoflash bombs were essentially pyrotechnic devices filled with flash powder.

The M120 and M122 World War II-era bombs featured one design had a round-nosed cylinder and at least 75 pounds of photoflash powder within.

The M23A1 was a different design that featured a cardboard tube body filled with flash powder and metal plugs on the ends.

After being detonated in mid-air, the bombs would produce incredibly intense light of up to hundreds of millions of candlepower — it was essentially the brightness of a spotlight but spread over a very large area.

Here are some examples of aerial photos shot in the 1940s with the aid of these flash bombs:

Back in July 2015, a photoflash bomb washed up onto St. Pete Beach in Florida, prompting authorities to evacuate the surrounding area and call in an Explosive Ordnance Disposal to detonate it.

Thanks to advancements in camera technologies used in both surveillance airplanes and spy satellites, we no longer need to explode special bombs in midair just to shoot nighttime aerial photos.