What’s up, photography fans? It’s Martin here from All About Street Photography, and today I want to talk about the story behind the famous photo Le baiser de l’hôtel de ville (Kiss by the Town Hall) by French photographer Robert Doisneau.

If you are not familiar with Doisneau, here’s a video I made about his life and work:

People like my photos because they see in them what they would see if they stopped rushing about, and took the time to enjoy the city. —Robert Doisneau

Le baiser de l’hôtel de ville was taken by Doisneau in 1950 with his Rolleiflex Camera in Paris. Even though it was taken in the 1950s, the picture became famous only after poster companies started selling it on things like postcards, posters, and calendars in 1980s.

It’s a photo that has been slightly controversial because although it was taken on the street, it was actually staged by models.

To avoid legal issues, Doisneau preferred to use friends or models for his commissioned reportage, which is kind of ironic knowing what happened later. This is, however, something unthinkable in the street photography genre.

To be fair, Doisneau was actually commissioned to take photos of kissing couples by Life magazine, and he later justified his actions by explaining that he would not dare to photograph kissing people on the streets.

A photographer who made a picture from a splendid moment, an accidental pose of someone or a beautiful scenery, is the finder of a treasure. —Robert Doisneau

There’s also a different story out there that says Doisneau saw his friends kissing and simply wanted to recreate the scene. Since the picture was commissioned, who would be better to take a photograph like this than a street photographer?

The fact is that the secret was actually hidden to the public until the 1980s, when a retired couple named Jean and Denise Lavergne (Lavern) thought they recognized themselves. When they confronted Doisneau, he did not initially refute their claim. Then, seizing the opportunity, the couple sued Doisneau for money for violating their privacy. That lawsuit led Doisneau to finally reveal that the subjects of the photo were actually hired models paid to pose for the photo.

To make matters worse for the photographer, the hired model sued him too and demanded a percentage of future sales, but she lost. This was a very unpleasant and shocking experience that, as his daughter later said, “ruined the last years of his life.” 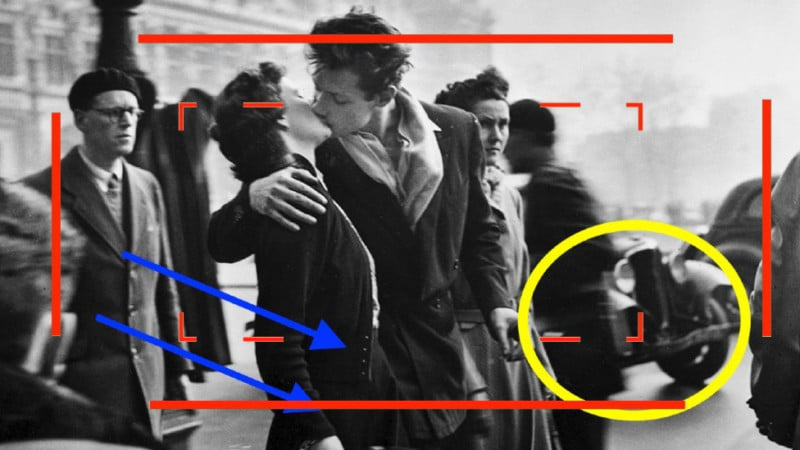 When we look at the composition, we can see a kissing couple in the middle of movement that is almost splitting the picture in half by the diagonal. The act of kissing represented is a romantic idea about Paris that a lot of people had and still have today. There is an empty space in front of the couple, and people walking behind the couple imply that this is just a short moment in the busy and beautiful city of Paris.

The New DisplayPort 2.0 Standard Can Run Three 10K or One 16K Monitor