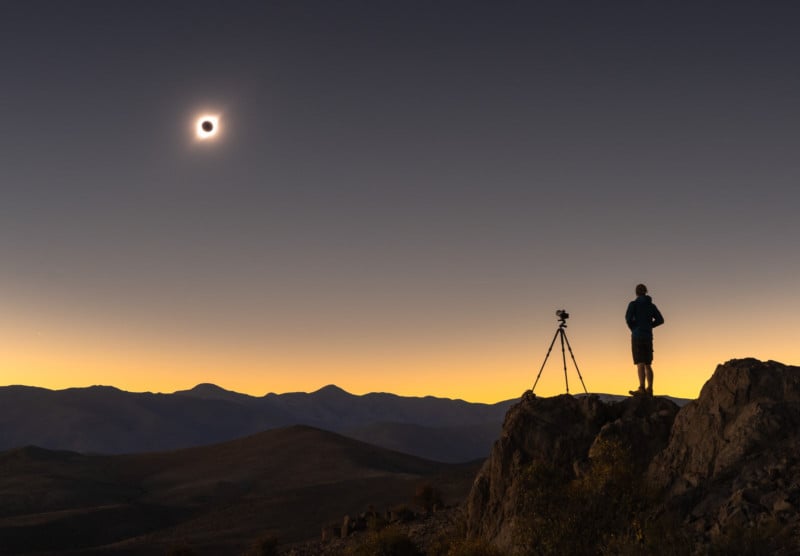 Total solar eclipses are of course a rare event. They occur once every 18 months on average but totality can only be seen from a thin and short path each time. On top of that, there will inevitably be eclipses ruined by bad weather and eclipses that occur in locations difficult to reach, such as the 4 December 2021 eclipse that passes through Antarctica. As such, people who are experienced in photographing total solar eclipses are few and far between and although I have only now captured just one myself, I’d still like to share what I learned from it.

Totality can last up to 7 mins 30 secs but is usually much shorter. In my case, it was just 2 mins and 37 secs. That’s not a lot of time, so you need to make sure you’re ready! Prior to the trip, I listed out what I wanted to achieve:

Then it was a matter of working out which gear I would use for each and then, of course, the settings required. Now, I mentioned that there aren’t many people out there with experience in photographing solar eclipses but one of those people is certainly Fred Espenak, the retired NASA Astrophysicist behind mreclipse.com. I used his tables to work out the settings I would need for my telephoto sequence shots and the numerous examples of wide angle shots also guided me for my own.

I wasn’t able to decide the focal length for my wide angle shot until I was in the field and had found a composition I was happy with though. To assist with this I jotted down some notes and diagrams that would help me choose. I drew out a diagram of where the Sun would be positioned during the main moments of the eclipse and also the angular size of various focal lengths. I also noted the settings for my telephoto sequence. Notebooks don’t require batteries or internet signal, so they’re always a safe bet. 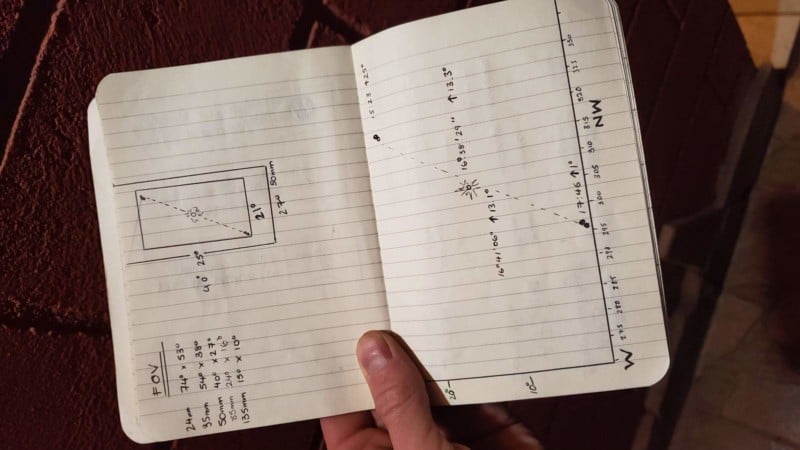 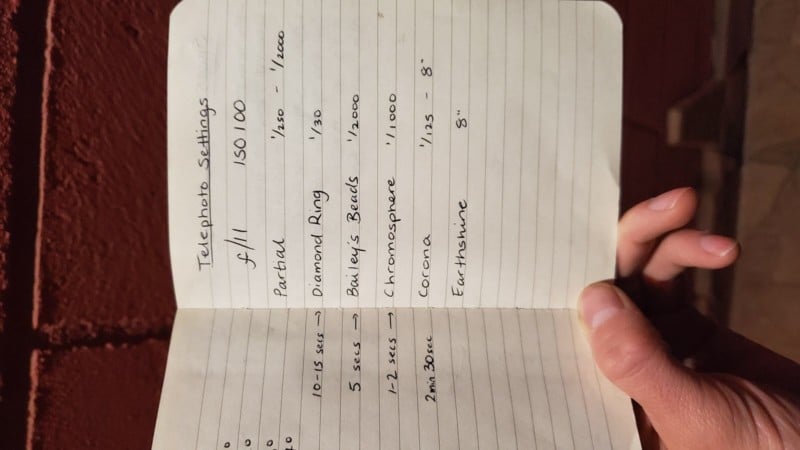 Even though I had worked out my settings based on the past experience of others, it is, of course, important to bracket your shots. Atmospheric conditions such as thin clouds could potentially alter the exposure of a total solar eclipse. It’s also worth noting that the eclipse I would be capturing was to occur only 13° above the horizon and so I would be viewing it through a thicker layer of Earth’s atmosphere than if it was directly overhead. This can also reduce the exposure value. Ultimately, bracket and be safe, or be sorry!

Use the Memory Recall Modes on Your Camera

There is a huge difference in exposure of the partial eclipse compared to the other telephoto possibilities (Diamond Ring, Bailey’s Beads, chromosphere, corona). The partial eclipse would also require a solar filter which would need to be removed about 1 minute before totality. Not only that but the settings required for the various stages prior to totality also varied massively and in such a short space of time.

Rather than trying to adjust the settings manually, it was best to have a bracketed exposure that covered all of those settings and then I would continuously fire from 30 seconds before totality. Once I had worked out the sort of bracketing that I needed to cover everything, I saved the settings into Memory Recall 1 on my Sony camera. That way, 1-minute before totality, I could remove the solar filter and switch to Memory Recall 1 and fire away without wasting any time adjusting settings frantically.

Totality is a frantic mix of emotional overload and panic. It’s essential to rehearse and practice the short window of totality before the actual event and make sure all your settings are solid and your gear is up to the task. One issue I was having was composing at 800mm using a ball head. It was rather difficult to keep the Sun in the center of the frame as there was always a bit of sag after tightening the ball head and then releasing my grip on the camera and lens. As much as I would have loved to use an equatorial tracking mount, I didn’t want to carry one half-way around the world with me and then for another 3 weeks around Chile all for one shot. 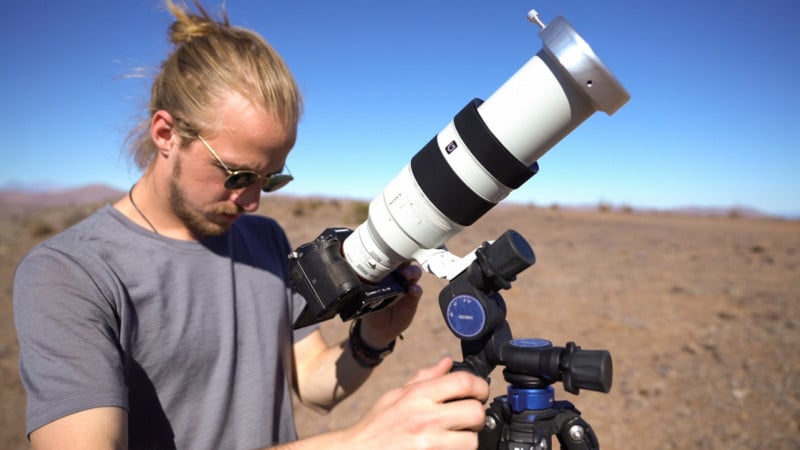 In the end, I opted for the Benro 3-Way Geared Head. Keeping the Sun in the center of the frame was as simple as making minute adjustments in two axes and there was no dreaded sag to worry about. Problem solved.

Avoid Traffic and Camp Out

The only main city close to the path of totality in Chile was La Serena. With just a population of 200,000, they welcomed 300,000 visitors. Credit must be given and the public services were all handled impressively, but there’s not much you can do to dodge that kind of traffic. To be safe, we headed to our location the day before and camped out. 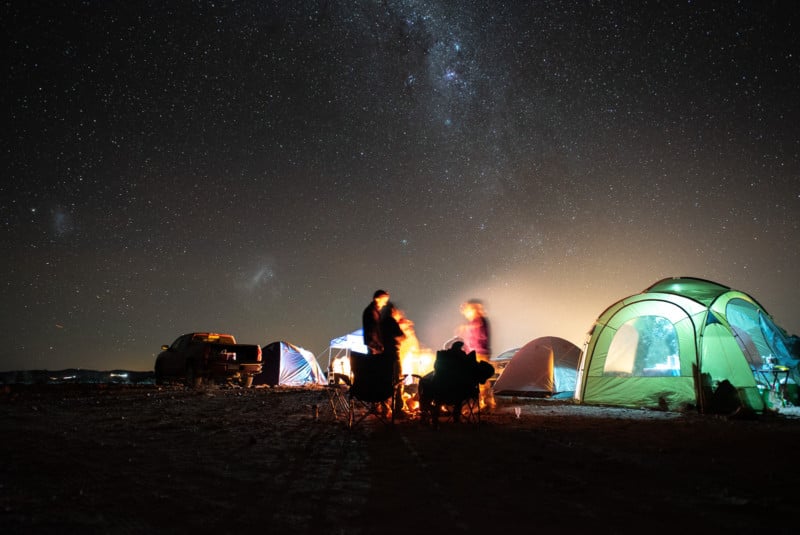 Solar Filters Are Essential But Don’t Have to Be Expensive

I remember seeing an article after the 2017 total eclipse in the USA showing all the rented gear that had been returned damaged by the Sun. I wasn’t going to risk any of my gear in that way so I started looking into solar filters. At first I found some expensive variants for 100x100m and 150x150mm systems but then was recommended Baader Solar Film by a fellow astrophotographer and friend. The film is quite cheap and you can DIY your own holder. I opted for a Gosky aluminum mount, but my friend resorted to simple tape.

Refocus After Removing the Solar Filter

Although technically there is no need to refocus after removing the solar filter, there is a chance you may knock the focus ring during the removal of it. I think this may have happened to me as my telephoto shots are slightly out of focus. Next time, I would remove the solar filter slightly earlier to give myself a chance to refocus, just to be safe.

Have a Backup Plan

About an hour before the partial eclipse was to begin, my friend Adrien dropped his super telephoto lens! Fortunately, he had a backup lens with him, albeit not as long in reach than he originally had planned, but better than nothing.

It’s also worth having a backup location just in case the weather forecast isn’t great. But do bear in mind that if you need to change location last minute, traffic may be crazy.

The experience of totality is far too great for words but perhaps watching me curse my way through the entire 2 mins and 38 secs in my recent vlog (embedded above), you can get some idea of what it can do to a person. It’s such a moving experience, I’m convinced that if I wasn’t so focused on getting my shots I most certainly would have cried. If it’s your first time, no matter how you imagine it will be, you can’t prepare yourself for the real thing. Just stay calm and get the shots.

Given the rarity of the event and just how moving it can be don’t forget to enjoy it. In the end, I had to sacrifice some of the shots on my list as I didn’t want to encroach on the experience too much. At least by keeping it simple, I had time to take it all and enjoy the precious moment and I’m glad I did.

Make it More Than Just the Eclipse

If like me you plan to travel for an eclipse then it’s best to make it more than just the eclipse. The fear of bad weather ruining the even was unavoidable, but being encouraged to visit Chile gave me a good excuse to tick two locations off my bucket list; Easter Island and the Atacama Desert. Even if the eclipse had been cloudy, I’m sure it wouldn’t have ruined the trip altogether.

About the author: Alyn Wallace is a landscape astrophotographer based in South Wales, UK. The opinions expressed in this article are solely those of the author. You can find more of Wallace’s work on his website, Facebook, Twitter, YouTube, and Instagram. This article was also published here.

Wedding Photog: This is Why Guests Should Put Phones Away