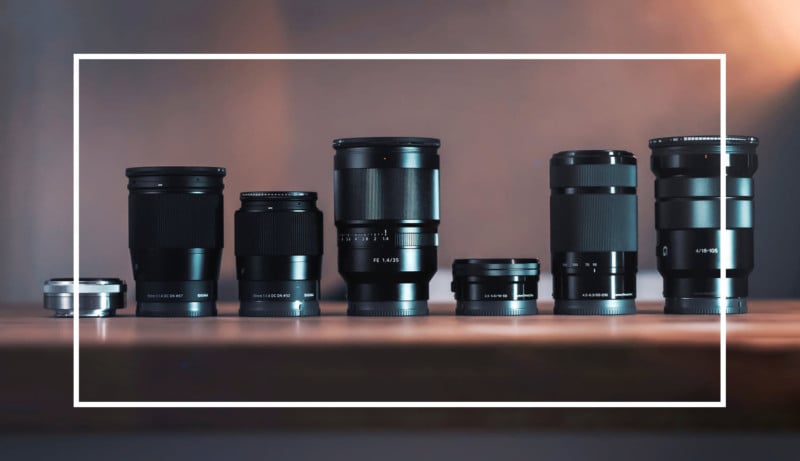 A major change — and learning curve — for me this year has been my switch from Nikon to Sony. I’ve already documented the story of my switch to Sony, but what I have since discovered is the huge possibilities — or as some of us might call it the “confusion of options” — that comes with owning a Sony Alpha camera.

Upon holding your Sony camera in your hands for the first time, the first settings you will be keen to decide are your custom buttons. This is widely publicized as one of the plus points of the Sony Alpha series. If you’re coming from Nikon and Canon, you perhaps haven’t really thought about which features you use all the time. If you are a professional photographer, your fingers have some muscle-memory to find all the feature you need – albeit sometimes in a cumbersome, menu-hidden location.

To aid me in this setup, I’ve watched quite a few YouTube videos of photographers explaining their choices for Sony Alpha custom buttons, And here’s the interesting thing – some people are using features that I’ve never seen before. One of these being the APS-C/Super 35mm setting — or to give it a more snappy title, crop mode.

And one thing I was hearing was that it might mean that photographers don’t need as many lenses — life changing right? Because carrying around numerous lenses is a currently a necessary evil if you want to get top quality images… or so I thought…

What is Crop Mode?

The APS-C/Super 35mm setting on the camera effectively chooses which sensor size that you using when shooting stills or movies. The location of this in the menu varies according to your camera model, but you will probably find it in the first menu group as shown below. 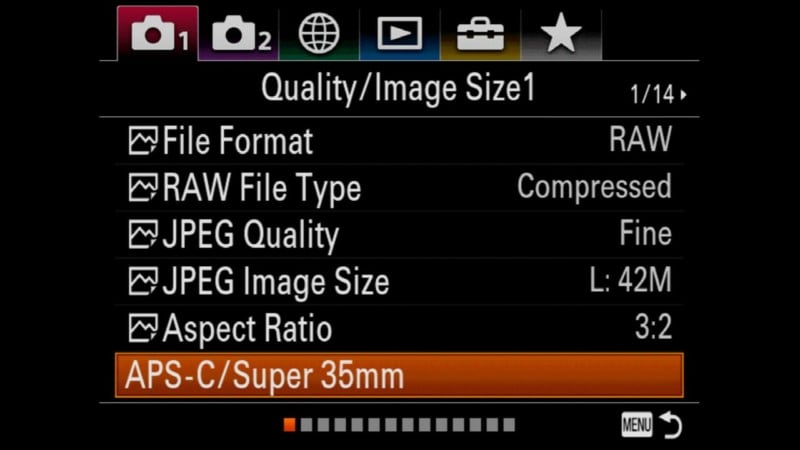 The name APS-C/Super 35mm makes sense when you know it does – it changes the effective sensor size for the photo to “APS-C sensor” equivalent for images, or what is known as “Super 35mm” equivalent for movies.

Sidenote: I know that for shooting video, the crop-mode is a well-used and doesn’t degrade quality so it’s an entirely different feature, but as I’m a photographer I’m considering stills not video in this test.

How Crop Mode May Change Your Life

Alright, it probably won’t change your life, but many photographers on YouTube are telling us that crop-mode should be one of your custom buttons.

Why? Because by turning it on and off during a client shoot or wedding, you can potentially reduce the number of lenses you need to carry, which in turn could mean saving a huge amount of money.

Who wouldn’t want to carry fewer lenses and get the same results, right? But I have to admit to being skeptical whether this would really be practical for a professional photographer. My knee-jerk reaction was “I’m not going back to a crop sensor!”.

Using a smaller sensor seems counter-intuitive after investing so much money in a full-frame camera and lenses. So is this really a viable alternative to changing lenses?

So What Do the Options Mean?

Warning: Boring technical bit. Skip this section if you just want to see the images.

Here are the menu options you will be presented with, and a few scenarios to illustrate the results for a full-frame camera such as the Sony a7 III, Sony a7R III, or Sony a9 models.

You will record in cropped mode regardless of whether you are using a full-frame compatible lens or a cropped-sensor-compatible lens.

Many people may have their camera set to the AUTO setting. It’s the most straightforward. If you are using a full-frame lens, the camera will use the full-frame sensor. If you put a cropped-sensor lens on the camera, to avoid any dark areas around the edges of the photo the camera will automatically choose to record with APS-C equivalent sensor. 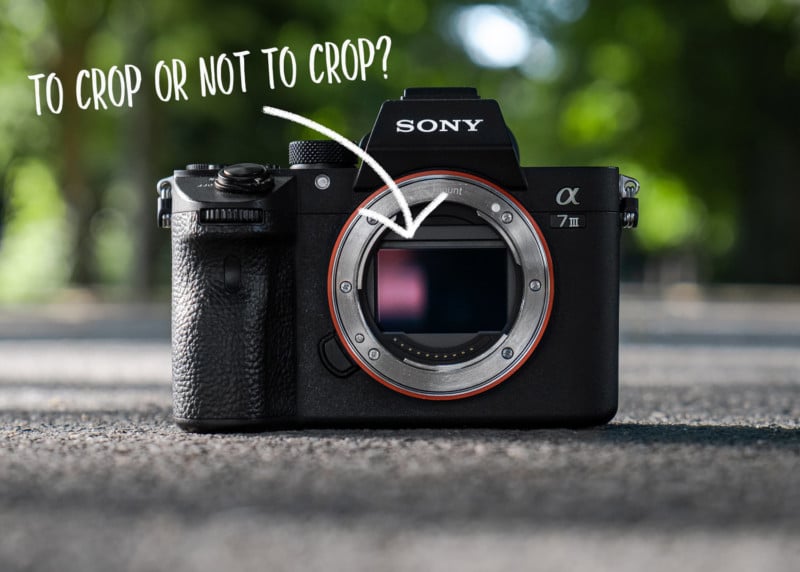 I started off with the most simple scenario – my camera (Sony A7iii) on a tripod, using the 85mm f1.4 GM lens. I took the first photo with 85mm with crop-mode OFF and then switched crop-mode ON for a comparative image.

It’s easy to layer the 85mm/crop-mode ON on top of the 85mm/crop-mode OFF because the second is of course smaller – less pixels. So when layered into the larger file, the images line up nearly perfectly, save for perhaps a wobble of the tripod. As I expected there appears very little difference in the images at all. 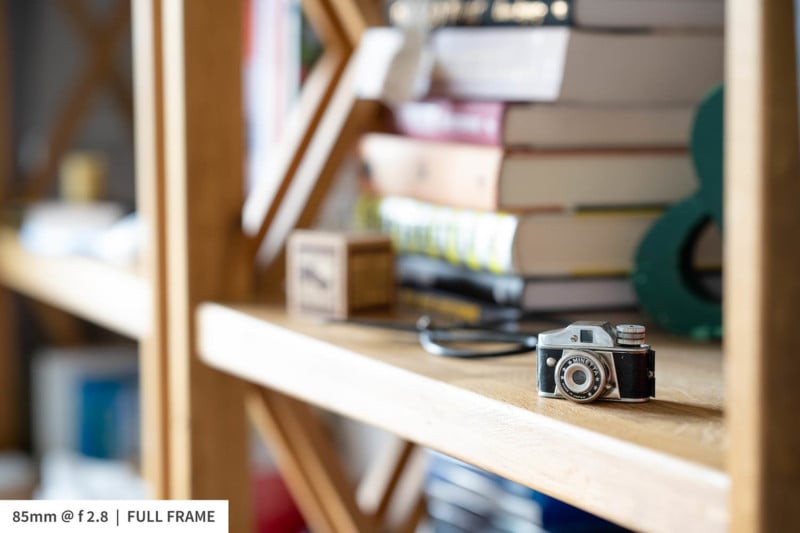 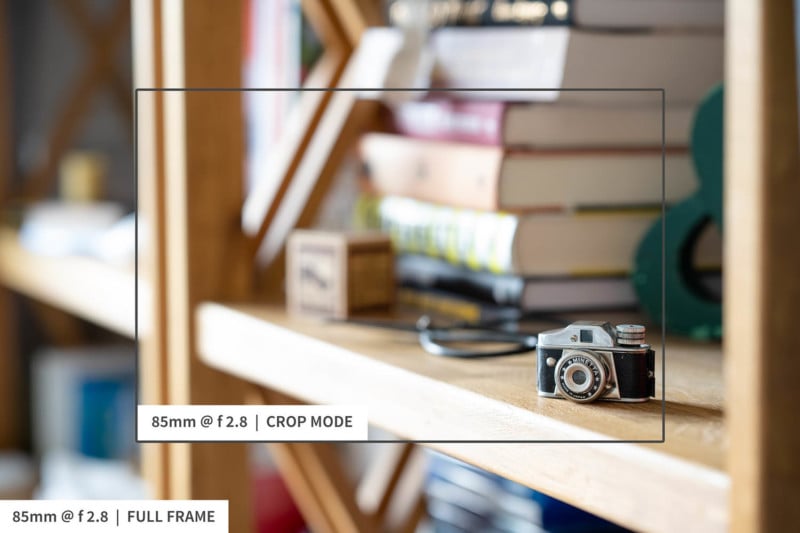 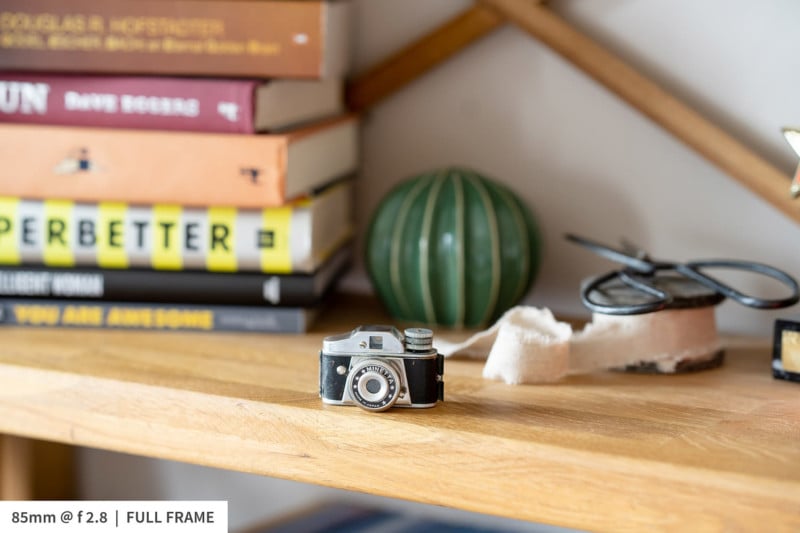 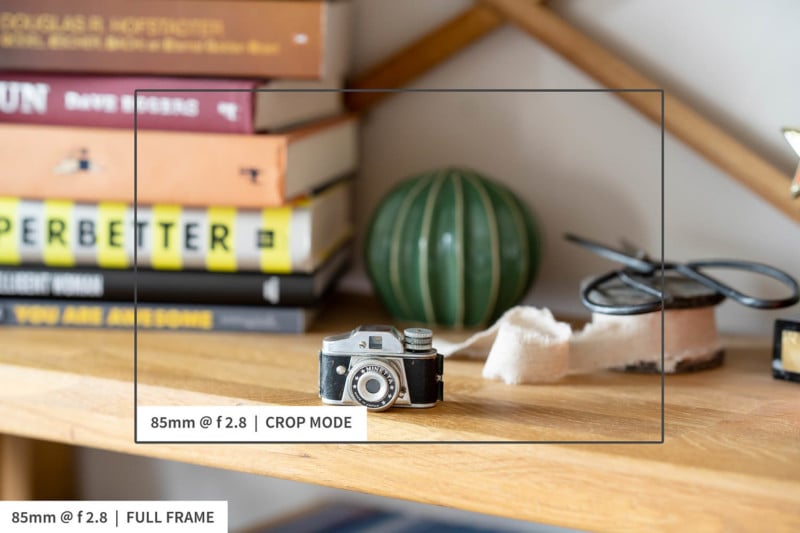 Taking this outside, with my slightly distracted model, it’s a pretty similar story.

Again with my camera on a tripod, but using my Sony 50mm f1.8 – a far cheaper, more basic lens – I shot several images at f2.8 to compare.

As expected, there really is no discernable difference between the bokeh, sharpness, and depth of field. The resultant image would be exactly the same if shot using the full-frame sensor and cropping in Photoshop afterward. 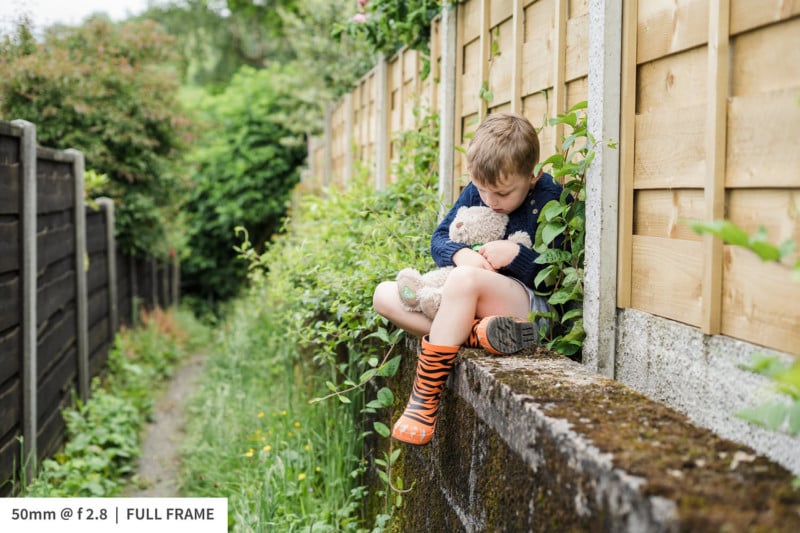 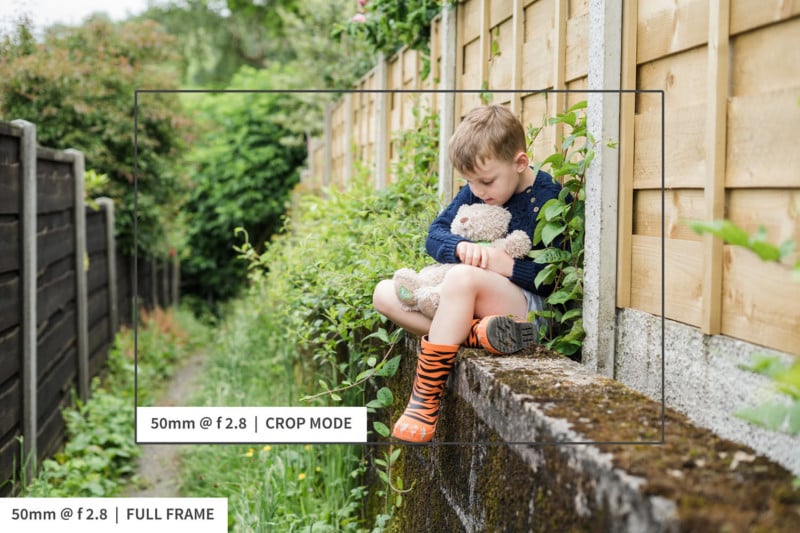 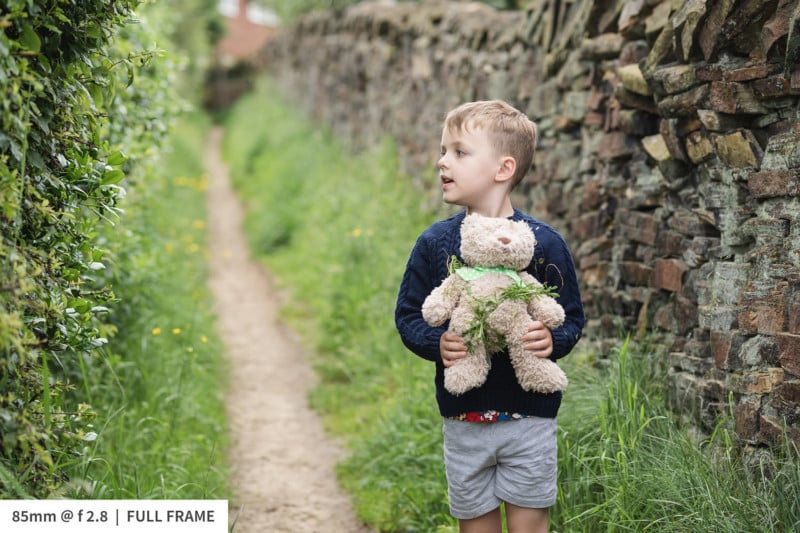 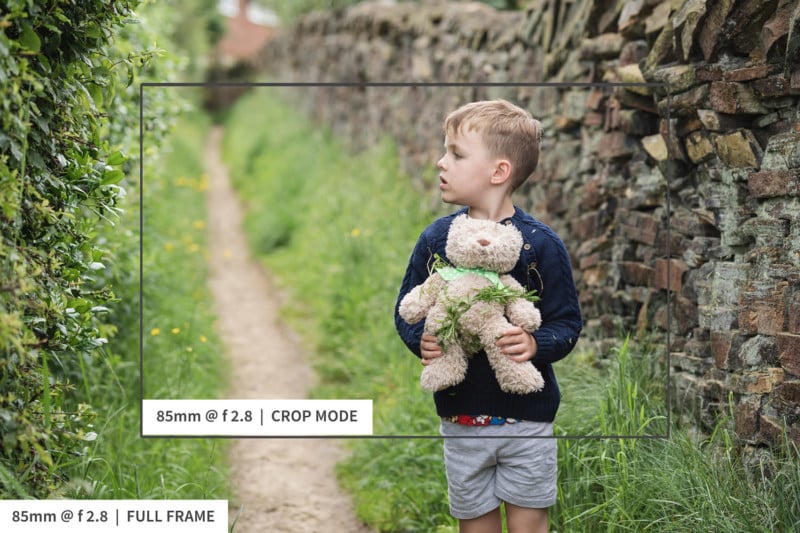 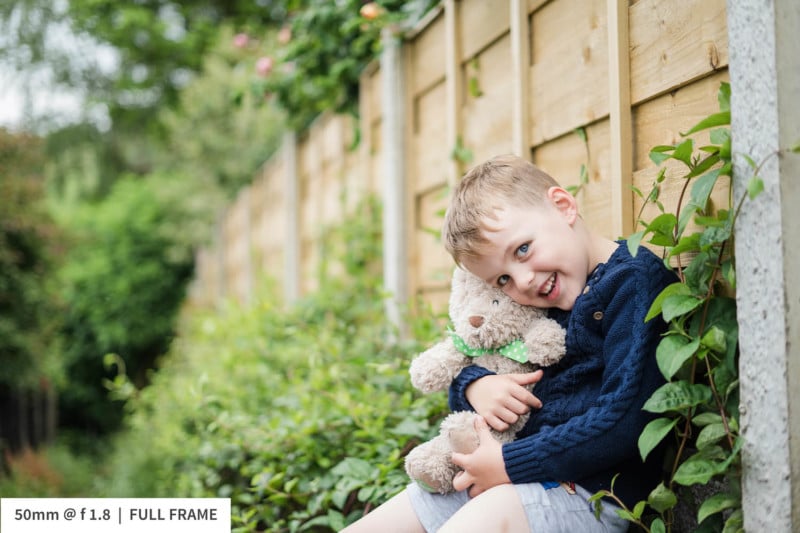 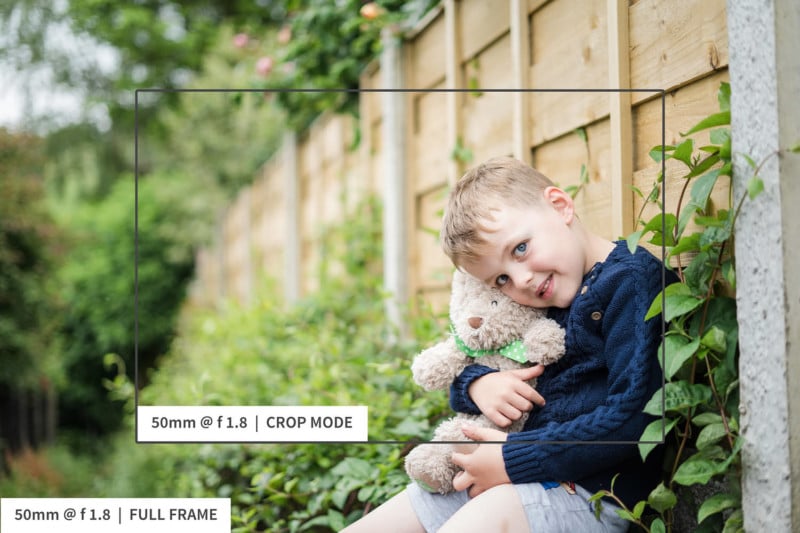 One side note here: the 50mm prime lens when shot with a cropped sensor produces an image with effectively 75mm rather than 85mm focal length. So although the photos are labeled “same position,” in reality I did move the tripod forward about 1 centimeter for the 50mm to try and match photos as much as possible, for a fairer comparison.

The results show us that there is a similar result, but the photo shot at 85mm does have extra blur on the bokeh and, as we might expect, some indication of more compression when looking at the camera in the foreground compared with the pile of books. However, with the 85mm f1.4 GM lens retailing at around £1600 and the 50mm f1.8 lens costing only £180, the quality of the lens should also be considered here!

And although the images are the same size here for comparison purposes, the photo taken on the 50mm with crop-mode ON will be a much smaller image (3936 x 2624 pixels).

So if your priority is to get photos with the most pixels, the best resolution, you would pick the 85mm lens with crop-mode OFF to get a photo with 6000 x 4000 pixels – a huge difference! 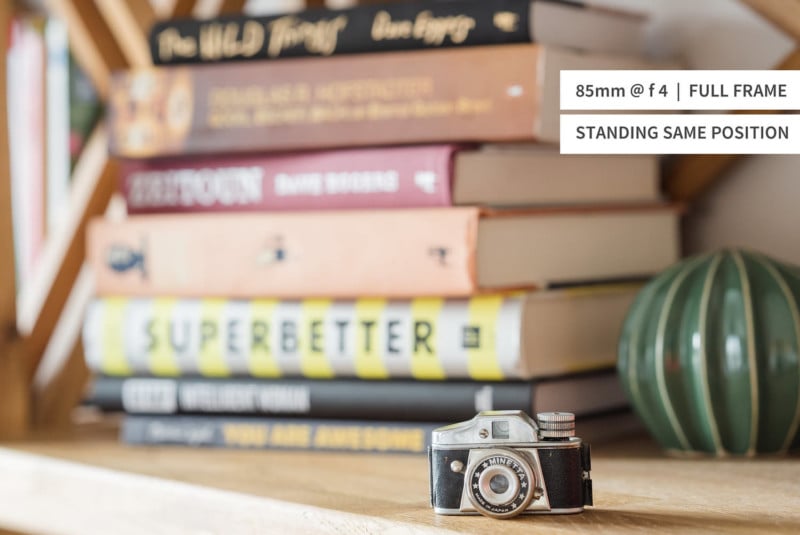 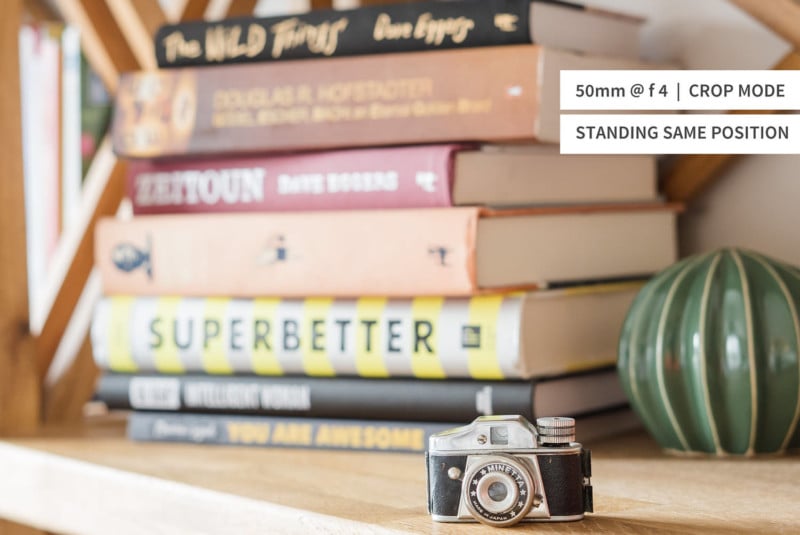 One of the lenses I have had on my wishlist for quite some time is a 135mm prime lens, and I wondered whether discovering this feature on the camera might put an end to that. So my last test was to look a bit further at that scenario – a photoshoot where I tested the 85mm / crop-mode OFF with 85mm / crop-mode ON.

I wanted to test out the idea of using the 85mm / crop-mode as a substitute for a 135mm lens.

Side note: Maths geeks among you will point out that the actual focal length of the 85mm on a crop sensor is actually equivalent to 128mm, not 135mm. But alas, I didn’t have a 90mm lens to get the perfect equivalent…

For the first photo, showing the results with an 85mm, I stood close to the subject for the 85mm / crop-mode OFF shot.

For the second photo, I moved back to try and capture nearly exactly the same amount of my subject in the frame and shot with 85mm / crop-mode ON for my “135mm lens substitute” photo.

By this time, my model was less than keen to stand still so wasn’t allowed the luxury of perfecting my test here, but I think it’s clear to see that the 85mm / crop-mode OFF with 85mm / crop-mode ON show very similar amounts of bokeh and depth of field.

Alas, I didn’t have a 135mm prime lens for a comparison shot – or indeed by this time any subject as he’d run off – but I am pretty sure that the equivalent shot with the 135mm lens would, by its very nature, give me more bokeh and more compression. 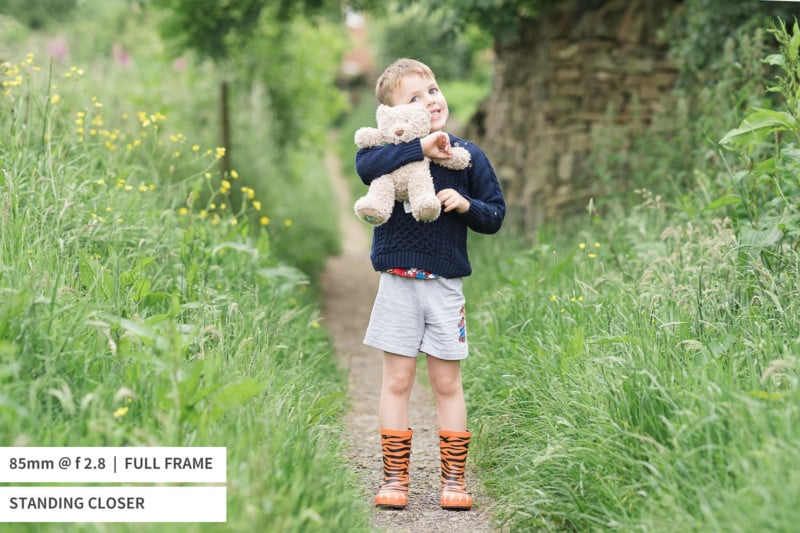 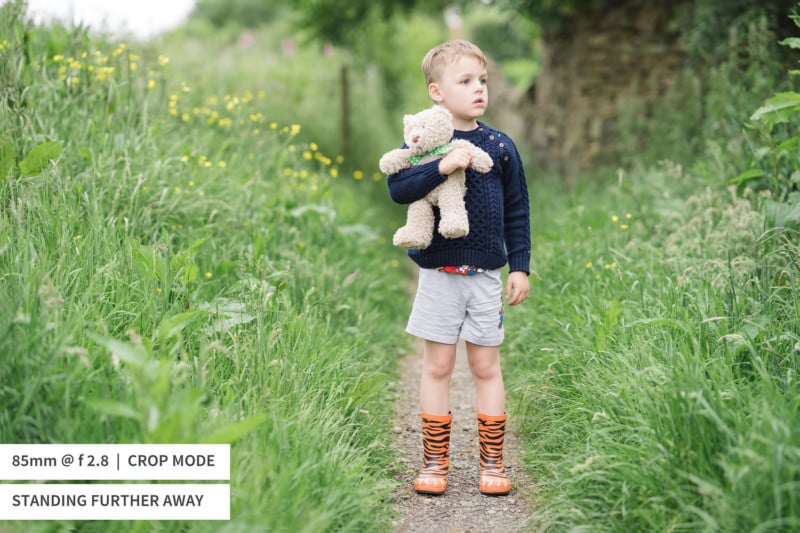 So what are my conclusions after these tests?

For shooting commercial photography — images that might be printed in large format — I wouldn’t want to use the crop-mode feature because I want to have the maximum number of pixels (6000 x 4000).

For family photography, headshots, or wedding photography, where having all those pixels is often not quite so critical, I think that if I already own the longer lens, my preference would always be to shoot with a longer lens instead of a shorter lens with the crop-mode feature.

But this probably because I’m a bit of a perfectionist – some might say anxious – photographer. I want to have the maximum number of pixels even though for most purposes it’s probably overkill, and I want to have the extra compression and potentially extra bokeh to get the best result possible.

From a practical point of view, there are times when changing to a longer lens would mean missing the shot. Case in point above with my last two test shots. Had I owned a 135mm prime lens, I wouldn’t have got the shot at all because by the time I had changed my lens, my subject would have grown impatient and the moment was lost.

And for headshots, event photography, and for some more documentary parts of the day with wedding photography, you could also argue the difference in bokeh and compression might be negligible and the crop-mode could be useful when shooting in a venue with restricted space.

But in both these cases above – the fast-moving child or the less bokeh-rich subject matter – you would get exactly the same result from shooting at full-frame and cropping in Photoshop. And there might be the added benefit of being able to adjust the crop for an awkward limb-chop or to improve the composition. Even with the A7Riii camera model, with a full frame resolution of 8000 x 5320 pixels, although the cropped photo would be a very decent 5,168 × 3,448 pixels size, the same applies – cropping is probably best done in post-production.

So in summary, although it’s a nice feature, it’s probably not one I will use often.

I’m sure there are some photographers who will find it useful. If you are aren’t worried by reducing your images size, if you are shooting at smaller apertures where bokeh is negligible, if you are on a tight budget and simply can’t have many lenses – and critically if you don’t edit your photos and so can’t achieve the same result in post-production – yes, the crop-mode feature could be for you!

But I certainly haven’t stopped wanting to add the 135mm prime lens to my collection. And in the meantime, I’ll continue shooting full-frame and cropping in post-production where necessary.

About the author: Ellie Cotton is a family and commercial photographer based in North West England. The opinions expressed in this article are solely those of the author. You can find more of Cotton’s work on her website and blog. This article was also published here.

This Volcano Eruption Was Shot from Space with a Nikon D5