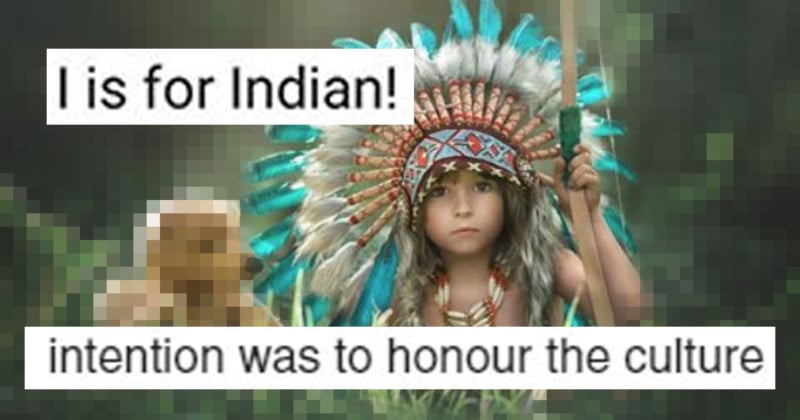 Before we go into one specific example, let’s go through what generally happens when things like this come up. First, the person is educated by Natives who detail why xyz actions were in poor taste or racist. Sometimes that education can come with some foul language. Questions of racism are often asked.

Second, the person doing the wrong thing is inundated with a whole lot of people who make claims such as “I’m Native and I’m not offended”, or how “everyone is so PC these days and it’s harmless”. Once the fake Natives engage with the actual Natives, inevitably the person doing the wrong thing decides to listen to the voices that excuse them – the fakes and sellouts.

In the end, the fakes and sellouts along with the original offender decide what really happened was that they were honoring us and that we should be honored that they did. No joke, this is how it goes down 99% of the time. Like this:

Recently, I saw a member of a Facebook photography group called Fire and Ice Photography Society, post this photo, asking if it was a child role play or cultural appropriation. 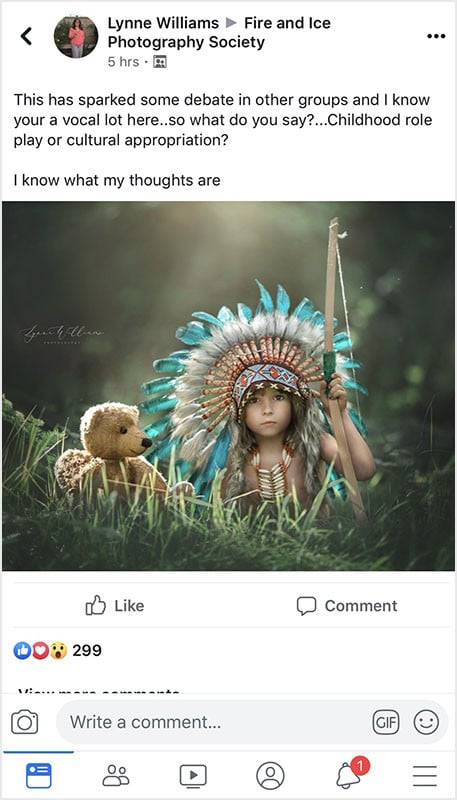 The first part of the question, ‘is this a child role play’ suggests that this innocent and blameless child merely wanted to play dress up. The problem with this framing is that the reason the child is in the headdress is because she, Lynne, the photographer, was doing an alphabet themed shoot and lacked a word for the letter “i”. She figured “Indian” would be a proper “i” word.

The disrespect for this shoot is 100% on the photographer.

Lynne Williams of Windermere Images had a personal project that was alphabet themed. One caption that she had was, “remember that alphabet project I was working and got stuck after ‘H’? Here it is, ‘i’ is for ‘Indian'”. 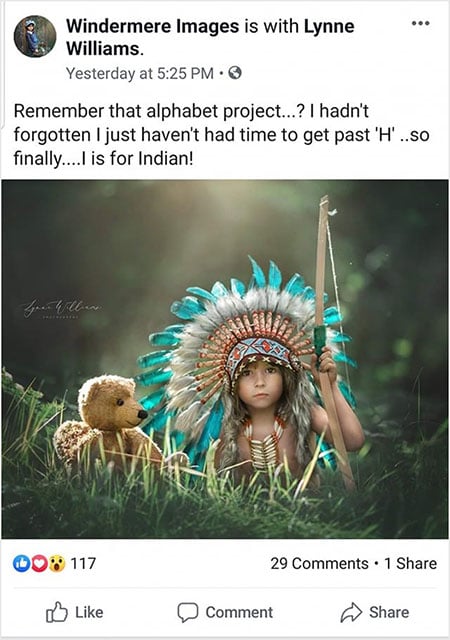 This is already a pretty poor choice. While the majority of Natives have stopped using the term, it’s still part of a lot of legal designations especially with the government such as Bureau of Indian Affairs and we’ve used it for National Congress of American Indians. It’s still largely an outdated term.

The photo was in a different photography group with a caption of ‘wild and brave’. 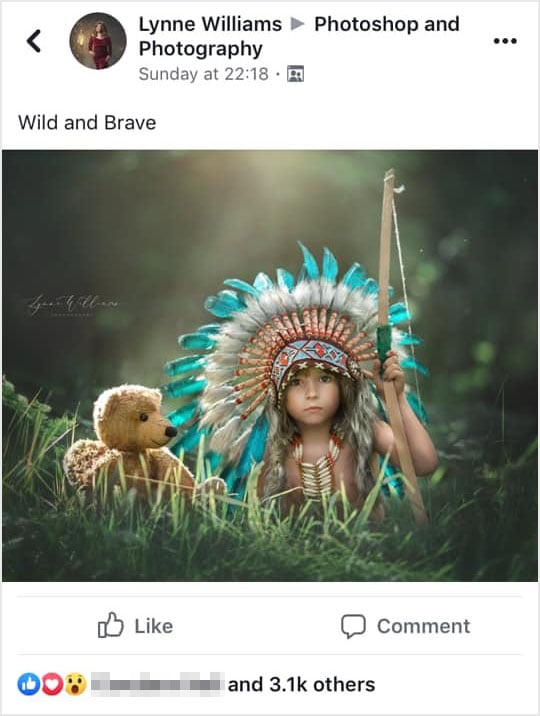 It’s quite possibly been posted to other photography groups in various pretense and until the Fire and Ice Photography Society, it probably didn’t meet with general acceptance and Lynne eludes to as much by admitting, “this has sparked some debate in other groups”.

If it’s being debated in multiple groups, maybe it’s because people see it as wrong.

The Fire and Ice Photography Society’s post had well over 200 comments to it when I saw it, ranging from, ‘this is appropriation’ to the obligatory, “I’m Native and not offended” or how this was just PC bulls**t and no harm done. 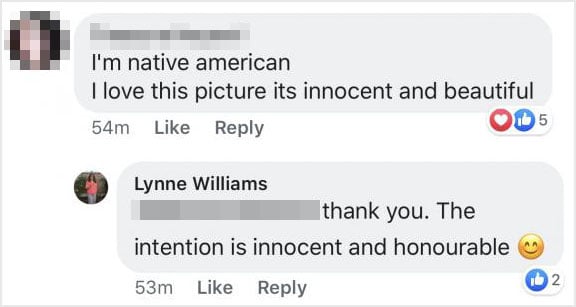 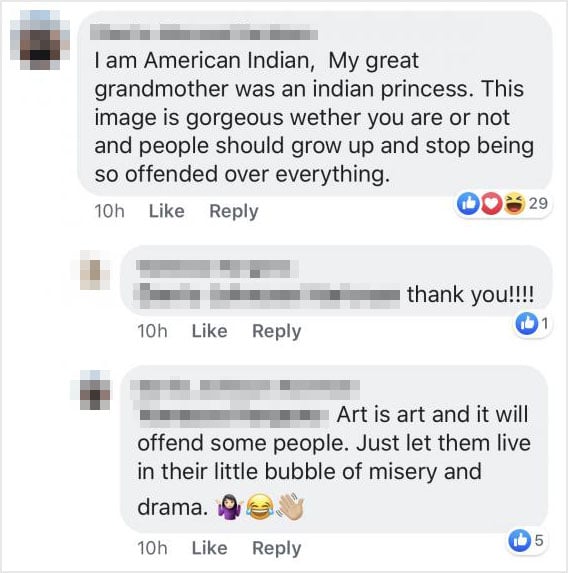 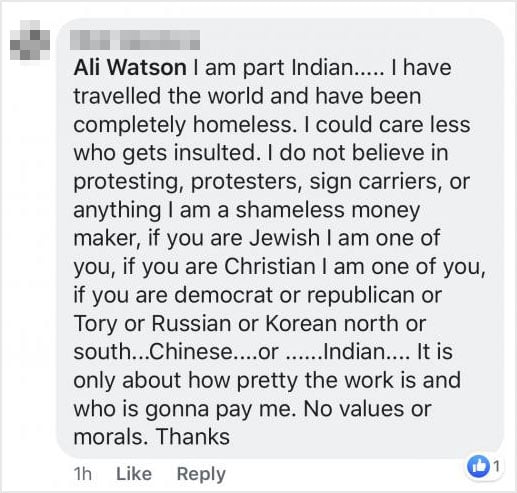 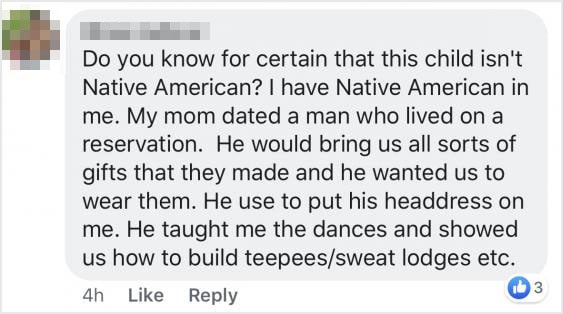 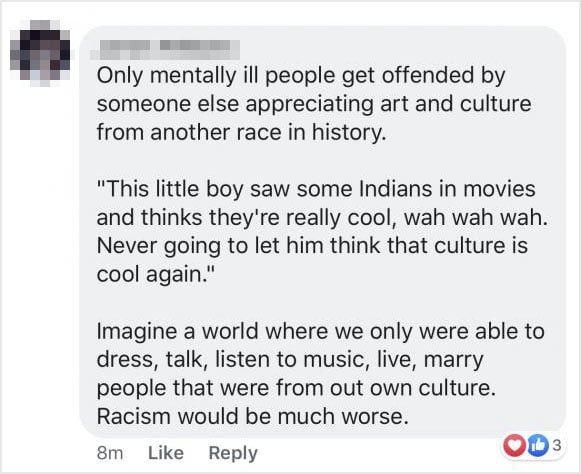 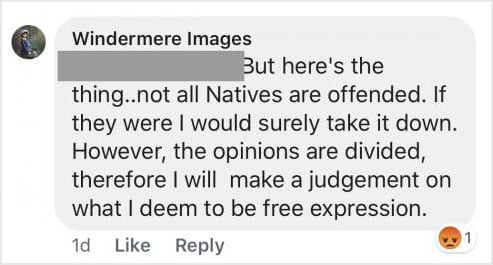 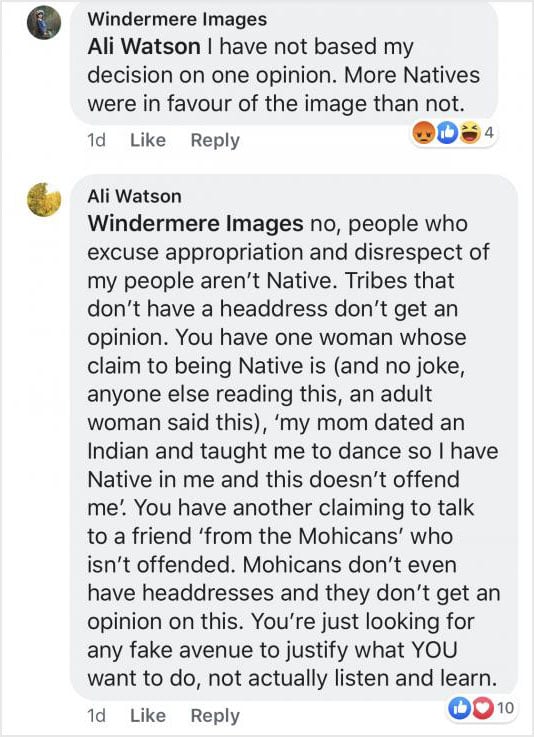 When I spoke up, I had plenty of people to reply to and with and did so. I defended my culture and how this was cultural appropriation and disrespectful. After a few hours, without warning or any other type of communication, the admins chose to ban and silence me, one of the only real Natives in the discussion.

Current members from this group have messaged me about what’s being said about me behind closed doors after the ban. I have plenty of screenshots showing false claims that I have treated people with hate. I did poke fun at a couple of the fake Natives claiming that it wasn’t offensive, but shouldn’t this misappropriation of Native identity also be considered a lie or at the very least in very poor taste? I can at least prove my ancestry and that I belong to my culture.

Just like appropriation tattoos, there are usually two parties at fault for racist and appropriation photos: the client or whoever came up with the concept and the photographer who went with it. In the case of “i” is for “Indian”, the photographer was also the client. Where else she got backlash before ending up at the one group that would absolve her of any disrespect was (surprise!) a bunch of other photographers.

There were a few good people, awesome allies and a couple of other Natives, in the discussion. Yet it seems that I’m the only person targeted and booted despite this being MY culture that was being s**t on by the collective. What it did was starkly bring to the forefront of how photographers, in general, refuse to listen or respect Native voices when we speak about what is and isn’t respectful in regards to honoring or “honoring” our cultures.

Why non-Natives think the “but I’m HONORING you” is an all-encompassing get out of trouble free card is astounding. 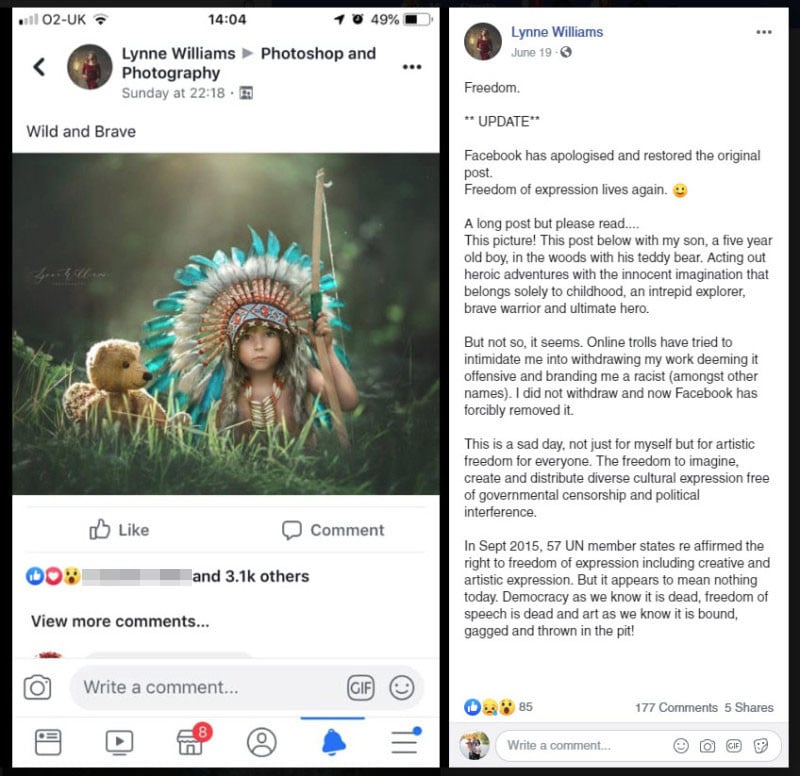 Photographers, like any other creative, have a responsibility to what they are creating. There should be morality and ethics guiding how you want your vision presented and perceived because the finished piece is also a reflection of you. When Natives argue for respect of our cultures, we are appealing to one’s sense of respect and honor, if they have it.

No, we don’t have to. You’re not entitled to it. We have never collectively consented to the appropriation of our cultures. Some of you photographers hopefully understand what consent means. If we are killed off to the point of extinction, you’re still not entitled to it.

You can choose to learn, respect the cultures and take photos of Indigenous people though. Some might be open to being photographed in regalia. There are plenty of ways to admire and respect our culture without stealing it. Bear in mind that until the 1970s, we weren’t even permitted to perform our cultural ceremonies or practices legally in this country and yet non-Natives could wear us as costumes the entire time.

In closing, between a number of groups, only a small amount of photographers seem to understand how this cultural appropriation is wrong. I’d like to take a moment to thank you for speaking up for the respect of Indigenous cultures. It was moving and gave me a lot of hope that more photographers will understand how inappropriate these kinds of shoots are.

About the author: Alexandra (Ali) Watson is Oglala Lakota and Choctaw, Oklahoma. She’s also a photographer and involved in Japanese rock music and Visual Kei music. You can find more of her writing on NtvTwt and her website. A longer version of this article was also published here.