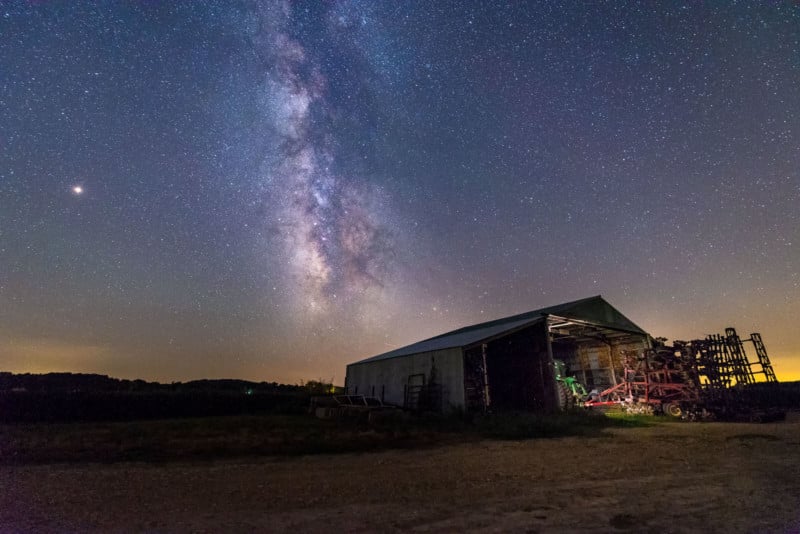 Living in St. Louis almost my entire life, I was lead to believe the lights of the bustling city were too bright to make seeing stars anywhere nearby impossible. As I grew older and started getting serious about photography, I realized that was correct… kinda.

You see, if you’re within an hour of St. Louis, Columbia, Kansas City, Springfield, Cape Girardeau, or any other larger town I didn’t list; you can most likely see some stars near your town. Just because you can see stars doesn’t mean you can photograph them.

The way the modern DSLR is able to photograph stars that are so faint to our eyes is based on a few very key camera settings — the combination of aperture, shutter speed, and ISO. My general rule of thumb is if you cannot see the Milky Way at all with your naked eye, your camera will not be able to capture it well regardless of how maxed out your settings are.

For my Milky Way photography, I usually stay within these settings. I have had my best results with them and I believe you may as well.

The above settings are subject to change for every person and camera/lens combo, as there is not one universal camera setting for the Golden Milky Way image (darn!). Those are what I use for my photography, I highly recommend adjusting your settings plenty of times and seeing the final images before being set on your settings.

The first thing we must take into consideration is your camera system. Before you even step foot outside of your house, look in your camera bag and see what camera and lens you are using. A full-frame camera will work a lot better at a higher ISO than an APS-C camera will. To avoid getting too technical, the main reason I recommend a full frame DSLR is bigger pixels and a larger image sensor will handle higher ISO better than the smaller pixels and smaller sensors offered by an APS-C camera.

The next thing to look at is what lens are you using and what is its maximum aperture? The standard kit lens offered with most cameras (18-55mm) is not ideal for photographing the Milky Way, but if you are on a budget or just testing the waters, it will be sufficient. Keep it at 18mm and f/3.5 for best results.

The best lens for wide field Milky Way photography, believe it or not, is not a telephoto lens but a very wide lens. There are plenty of photographers who have telescopes that cost as much as a house and enjoy photographing deep space, but that is not what this article is about. We are discussing wide field, or wide-angle, photography. Some of the best lenses for this include the Sigma 14mm f/1.8, Tamron 15-30mm f/2.8, Nikon 14-24mm f/2.8, Canon 16-35mm f/2.8, Zeiss 15mm f/2.8, Rokinon 14mm f/2.8, Nikon 20mm f/1.8. These are just a few, if not the best, for astrophotography.

I strongly recommend a very sturdy tripod for astrophotography. You will be doing long exposures and even the slightest movement of your camera will be shown in the image as the stars will become blurry lines. A tripod that will stay planted during your images is a must have. I cannot stress this enough — do not cheap out on a tripod. It is the foundation of your camera/lens, it is vital to have a good one.

The next thing to look into is location. Now in Missouri, this is huge. Yes driving 30 minutes outside of your city may take you to some dark skies, but your camera doesn’t see it that way. Any light pollution will be picked up by your camera. Remember those high ISO settings? At ISO 3200-6400 your camera is extremely sensitive to any light there is, the Milky Way is very faint and far away so the camera has to pick up any light it can to get that sweet Milky Way shot!

Since the camera is trying to capture light that is barely visible to the human eye, any street lights, lights from a gas station or Walmart, truck stops, you name it, will ruin your shot. If it gives off light, your camera is going to pick it up and it will have an effect on your image. As cities and towns continue to grow and expand, the amount of dark skies left for space observation and photography is shrinking. Luckily, there are still some dark spots left in Missouri. South Central Missouri and all of Northern Missouri have some of the darkest skies in all of the state. Below is a snap from the Light Pollution Map app, this is what I use to plan some trips and make sure the areas I want to visit aren’t going to be littered with light pollution. As you can see, the blue represents darker skies and the yellow/orange/red represent light pollution. Northern Missouri and Southern Missouri are going to have the darkest skies in the state. Nowhere near St. Louis, Kansas City, Springfield, Columbia, Cape Girardeau will be dark enough to get any good Milky Way images. They are possible — you could theoretically get a Milky Way image probably 20 minutes outside of St. Louis/Kansas City — but it won’t look anywhere near as good as a Milky Way image taken in Eminence (my personal favorite dark sky location) or North Salem, Fremont, Bardley, Goldsberry, Indian Grove, Oxford (These are just some small towns I found on the Light Pollution Map that are located in pitch darkness, perfect for astrophotography)

The last topic to discuss before you go out to photograph the most stunning sight you will probably ever see is what I believe to be the most important — without it, you’ll never see the Milky Way! This topic is timing.

Unfortunately for us Missourians and just about anyone located above the Equator, the Milky Way is only visible in the Northern Hemisphere from early March through the end of November. For us here in Missouri, it’s more like the beginning of March through the end of October. As I am writing this, I am also multi-tasking by planning my Milky Way trips for this spring!

The Milky Way is not visible during the winter months. If you went out during the months of December, January, or February with your full frame DSLR, ultra wide F/2.8 lens, a good sturdy tripod, the darkest skies in the entire state and a list full of perfect camera settings, with the intent of photographing the Galactic Core (The big pretty orange/purple portion of the Milky Way), you still would not see it.

When you set out to photograph the gorgeous show of stars, keep in mind what phase the moon is in. If it is a full moon, or 4 days before/after, the Moon will be too bright and therefore astrophotography will be challenging. The best time to photograph space is during a new moon when the Moon is at its dimmest phase. The stars will almost be popping out of the sky with how bright they will be.

Beginning early March, the Milky Way will be visible just above the horizon right before sunrise. It will be stretched from the Eastern sky to the Southern Sky and will take up the entire Southern sky. If you have a clear horizon free of trees or any other obstruction. If you look South right before sunrise from March-May, you will see the Milky Way. There’s no way to miss it. It is huge. The Milky Way looks like a giant cloud, and it will be mindblowing when you see it for the first time and realize the sheer scale of it.

Starting in May, the Milky Way and its Galactic Core start to become visible a lot earlier in the night. Around 11pm till 4am is when the Core will be visible for the majority of May and June. The Milky Way will be at a 45-degree angle.

Starting July through the end of the Milky Way season, the Milky Way hits 75 degrees, then 90 degrees in Sept, and then disappears during Winter.

Finally, starting September, the Galactic Core starts to head towards the Horizon. This is an amazing opportunity to shoot the Milky Way as it is vertical, showcasing its gargantuan height.

As for my personal favorite, I love the May/June angle the most, as it makes for some amazing panoramas!

Now in this article, we covered everything from where to look for the Milky Way, what camera settings to use and where to be for the darkest skies. I hope it was helpful to you. Thanks for reading!

About the author: Joe Howard is a landscape photographer based in St. Louis, Missouri. The opinions expressed in this article are solely those of the author. You can find more of Howard’s work on his website and Instagram. This article was also published here.

The Noctilock is a Leica-Inspired Lock for Your Camera Bag