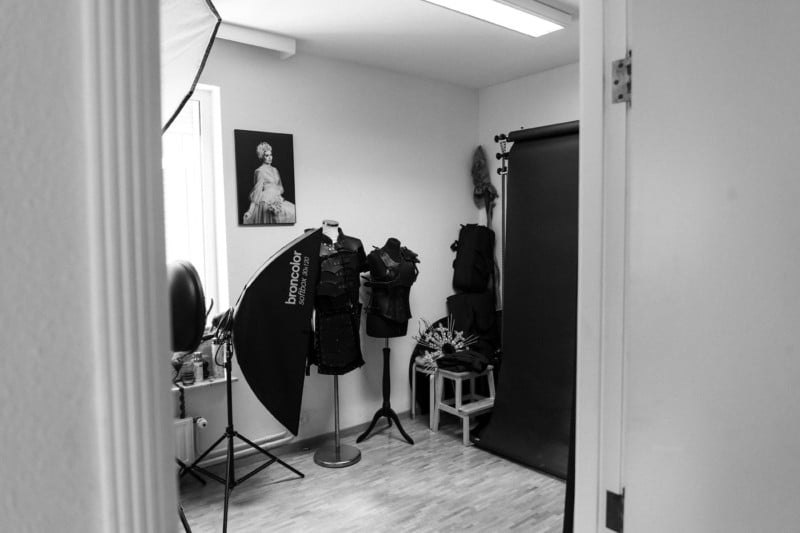 A lot of people seem to think I have a giant photo studio space. I do not. I actually have never had more space than the 2 converted bedrooms I work in now, and not so long ago I was renting a small, bedroom-sized commercial space. And even before that, I used to work in a studio between my bed and my desk. And going even further back, I had to sit on my bed to even be able to shoot a half body.

I started working with clients in the time I had a one-room living studio space. Good times.

I think space, as a whole, is something I’m in between proud and embarrassed about right now. It’s small and it’s stuffed full because I have too many awesome costumes and props and also a number of lights I’m not really able to place around, yet I have been managing kinda okay actually (considering what I’ve achieved in the past 3 or 4 years of doing this studio stuff).

Let’s talk about my magical place right now where I’ve created about 99% of my work for the past 2 years. Our current apartment is pretty big, which means I was able to take not only one but two bedrooms for my professional purposes of photography and everything it involves, which has been absolutely amazing as I’ve never had this much space. And even though right now I’m really feeling it’s limitations, I love the simplicity because it gives me a constant purpose to motivate and push those boundaries in all directions. It’s all I have. And it has taught me to think only within the frame of my camera, not outside of it.

I’ve also gotten pretty good at figuring out space management, I’ve owned between 300 to 400 costume pieces (including as many as 8 sets of armor), a bunch of lights and modifiers (thanks to the GenNEXT Broncolor program), a ton of accessories like my giant reflector (I use to avoid light bouncing off my wall), and way too many colored backdrops.

An IKEA shelf has become a partial costume storage solution (also becoming an awesome interior styling thing), holding also a ton of modifiers and props I use during shooting as well as other technical equipment — it’s adorned with a piece painted by my dear friend Shienra featuring “Triss Merigold” from the Witcher. 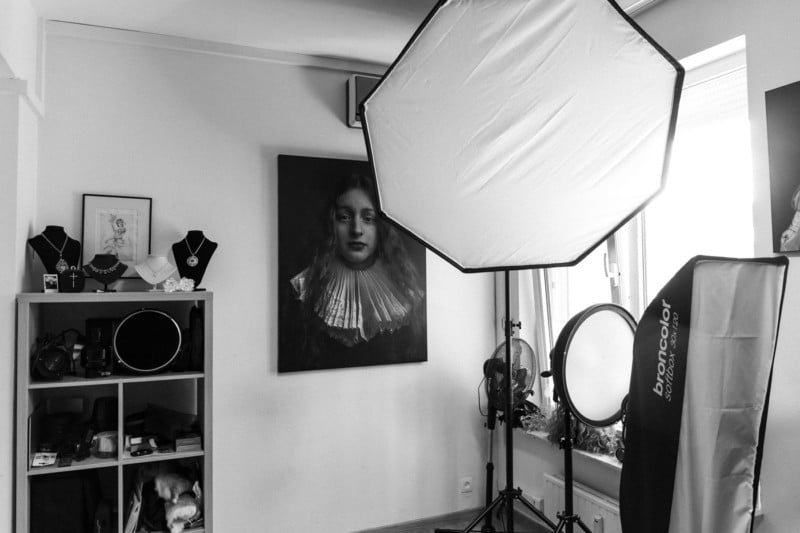 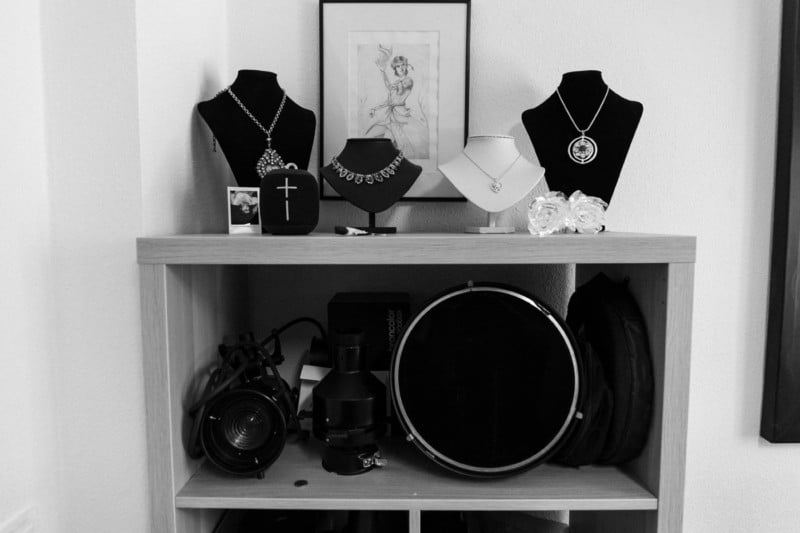 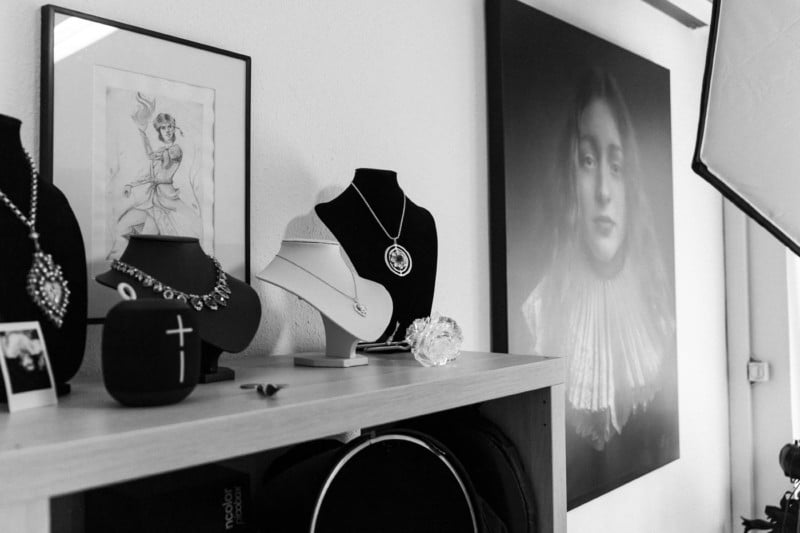 Behind my backdrop, I have my own armor and weapon armory (that backdrop hides three full sets of plate armor, way too many fake and real weapons, and some loose pieces). The corners of the room hold some more lighting equipment and my authentic harpoon (yup) on one side while the other side is the “backdrop spot” where I can easily pick and store anything I don’t use. 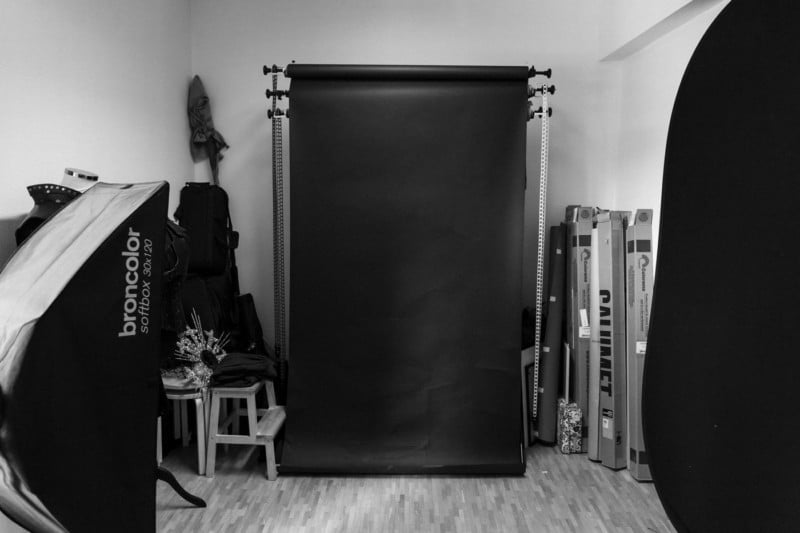 When I’m not using my lights; I usually store them all in front of my backdrop, keeping 2/3rd of my studio free which is easier to clean and keep track of; but when I’m working I usually put them on my left when shooting as they’re not in the way of either myself or the set. 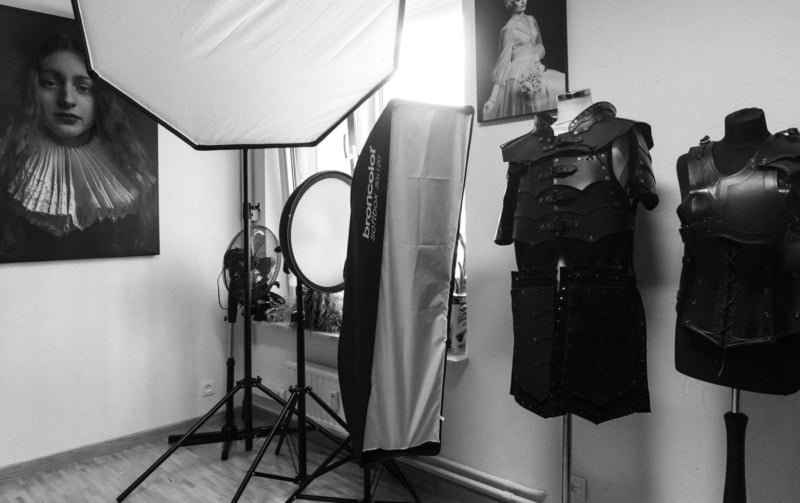 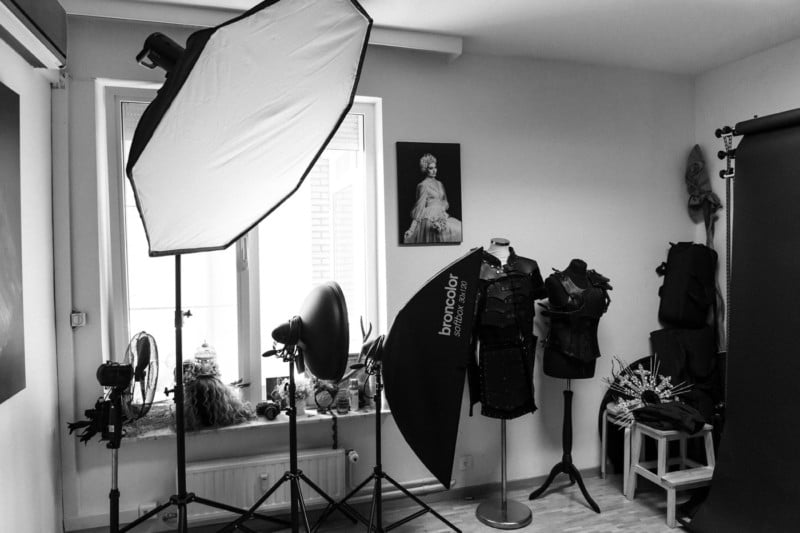 Against my “free” wall, I have stored some mannequins that are an easy way to store another 2 sets of armor. They also hold some stools to sit on, but it’s also where I often put my main light, which is why I don’t bother to cover that wall as the light comes from that direction anyway. 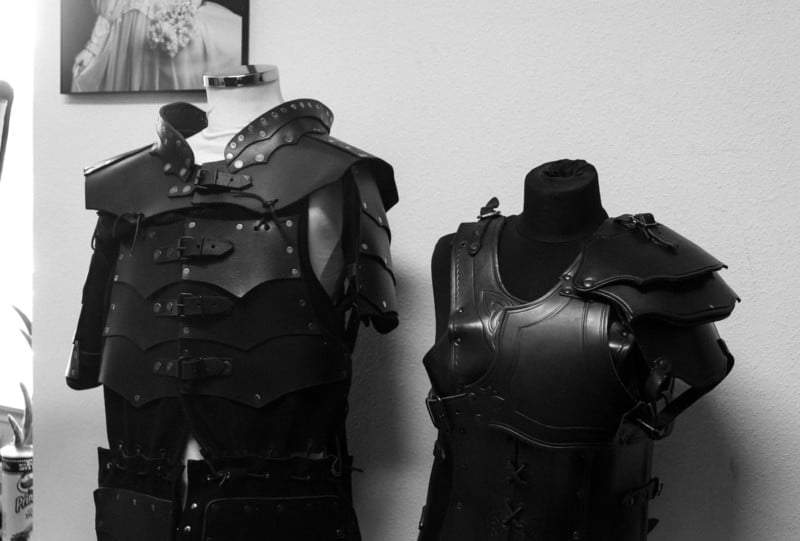 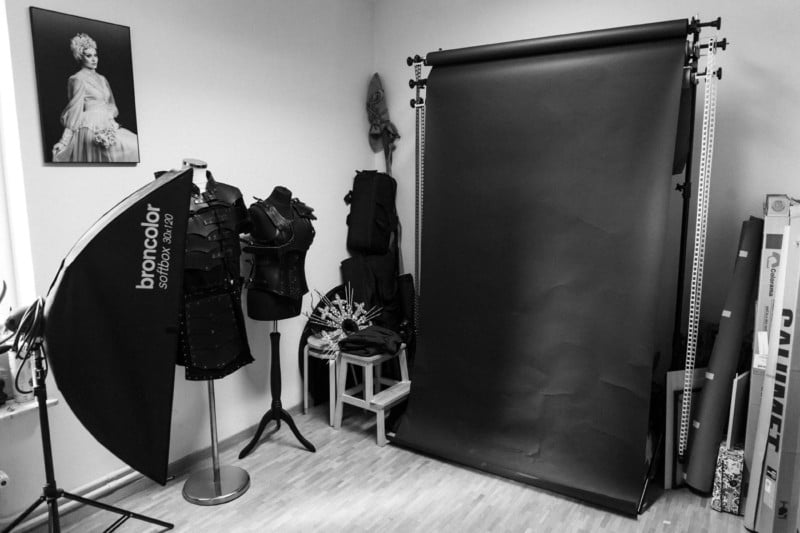 On the other side, I have my (unintentionally way too big) reflector, which is my most beloved thing now because it doubles both as anti-light for deeper shadows but also as a bigger and especially higher backdrop when my model(s) and/or sets are too tall. Two-in-one is awesome. 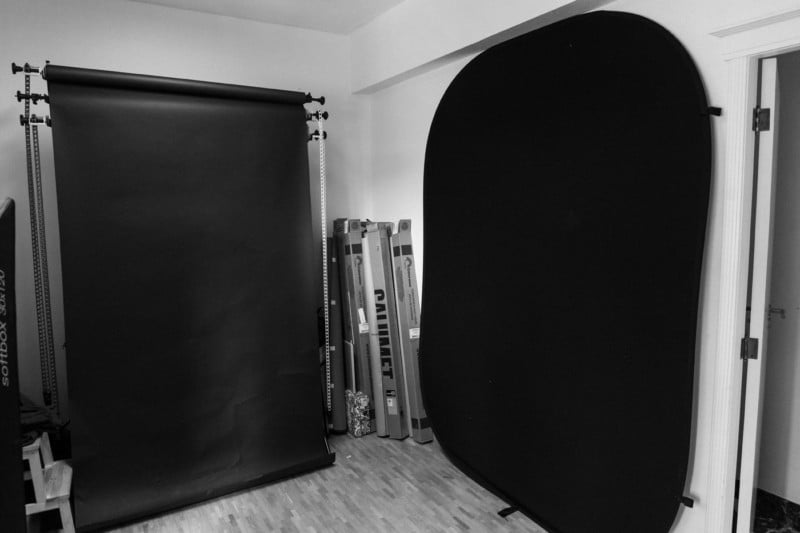 And that’s about it. Do I want a bigger space? Please yes. I REALLY do. But until then, it’s my cozy space.

An older set I did in 2018 – I uploaded this one in my gallery for my corset & lingerie clients to showcase some diversity in genre of what I offer. * * * Model – @illyria_okami Hair & Makeup by @eline.deblauwe.mua Corset by @hollyrafaela Necklace by @madonnaenchanted Halo by @hysteriamachine Photography by Studio Sheridan's Art * * I'm taking bookings for both product shots as styled sessions & lookbooks like these for designers, get in touch on [email protected] for more information. #halo #baroque #renaissance #painterly #win #captureonepro #contemporary #fineart #artphotography #belgiumphotographer #antwerp

Am I a bit embarrassed and shy to share this? I actually am. It feels in a way unprofessional to share how small and humble my space is, to be honest, but at the same time: this is what it is. I don’t need more to be able to do what I do. I am aware of how lucky I am to have it and how many crazy opportunities that it is giving me. And I can basically work almost anywhere by now because I’m not bothered as much by what isn’t there.

About the author: Laura Sheridan is a professional photographer and educator based in Antwerp, Belgium. The opinions expressed in this article are solely those of the author. You can find more of Sheridan’s work on her website, Facebook, Flickr, and Instagram. This article was also published here.

“Talking ‘Shop” is a New Podcast All About Photoshop

My 8 Best Tips for Flower Photography