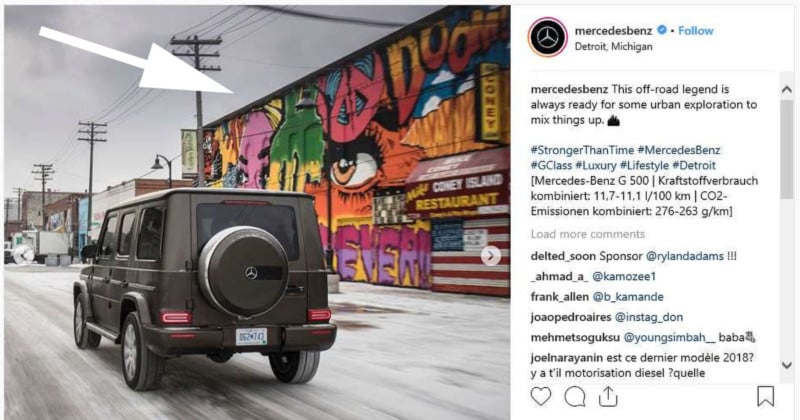 Mercedes has filed lawsuits against four artists after they accused the car company of infringing upon their copyright by including graffiti murals in the backgrounds of car photos posted to Instagram.

The Detroit News reports that in its lawsuits filed on March 29th, Mercedes is asking a federal judge to rule in its favor against claims being made by artists Daniel Bombardier, James “Dabls” Lewis, Jeff Soto, and Maxx Gramajo.

The dispute began back in January 2018 when Mercedes-Benz USA published a set of photos showing a Mercedes G 500 SUV driving through Detroit’s Eastern Market. Here are screenshots of the original Instagram photos:

The murals had been painted as part of the Murals in the Market program, an effort to beautify Detroit. Mercedes had obtained the necessary still photo and B-roll permits to do the commercial photo shoots in Eastern Market, but it didn’t ask for permission from the artists behind the murals.

A year after these photos were published, the artists began accusing Mercedes of copyright infringement and Mercedes responded by taking down the photos from Instagram. But the artists continued to demand payment in what Mercedes is calling a “shakedown” attempt.

“Nonetheless, Defendant’s attorney continued making threats against MBUSA [Mercedes-Benz USA], claiming that Defendant desires to ‘expose’ MBUSA, use formal discovery to learn information other people can use to sue MBUSA, and tell a jury that MBUSA made $80 million selling the G series truck in an effort to wipe out MBUSA’s revenue from sales of the G Series,” the lawsuit filed by Mercedes reads. “MBUSA did not infringe Defendant’s alleged copyright and therefore refused to credit this aggressive shakedown effort.”

“If courts were to adopt Mercedes’ argument, it could destroy artists’ rights for thousands of important and beautiful public works of art,” the artists’ attorney, Jeff Gluck, tells The Detroit News. “[Companies] would be free to use and exploit murals to sell their products, without needing to compensate the artists or even ask their permission.”

And Detroit officials behind the Murals in the Market program are siding with the artists, noting that Mercedes has previously licensed similar works for similar ads.

“We stand firm that the copyright of the artwork always belongs to the artist, unless the artist decides otherwise,” executive director Roula David writes in a statement. “We side with the artists and will help fight against corporations who don’t act responsibly or respectfully.”

Well-known artists Shepard Fairey and Tristan Eaton are among those who are supporting the defendants publicly:

I stand with @jeffsotoart and @maxxer242 because I believe they have the right to be fairly compensated if their work is used in a corporate ad campaign. I stand against the bullying tactics that a powerful corporation like Mercedes Benz is using to intimidate Jeff and Max. Visit the link in bio for more info from The @detroitnews. Thanks for caring. – Shepard #artistsrights

When will car companies get the memo on this BS? First @cadillac now @mercedesbenz – BIG BLAME AND RESPONSIBILITY should go to the ad agencies not doing their leg work here – Please pay attention to how public art is used in your campaigns. Most of the time its copyrighted work that needs approval and compensation. SHAME ON YOU @mercedesbenz – All you agencies out there please take notice @publicisna @rgabydesign @bbdony @droga5 @wknyc @anomaly @goodby_silverstein #teamdetroit

Artist Daniel Bombardier tells The Detroit News that the use of his mural in “an advertisement for a Mercedes Benz car that costs $200,000, without any compensation to me, or without even asking my permission first, is totally unacceptable.”

You can read the three lawsuits filed by Mercedes here, here, and here.

The subject of copyrighted art in commercial photography is an issue that makes headlines every so often. It may be news to many photographers, but lights of the Eiffel Tower are copyrighted, meaning you could find yourself at the receiving end of an infringement lawsuit if you try and use nighttime photos of the iconic structure commercially without permission.

And in 2010, photographer Mike Hipple was sued for selling a stock photo of a publicly-funded art piece on a Seattle sidewalk — the photographer eventually settled with the artist in 2011.