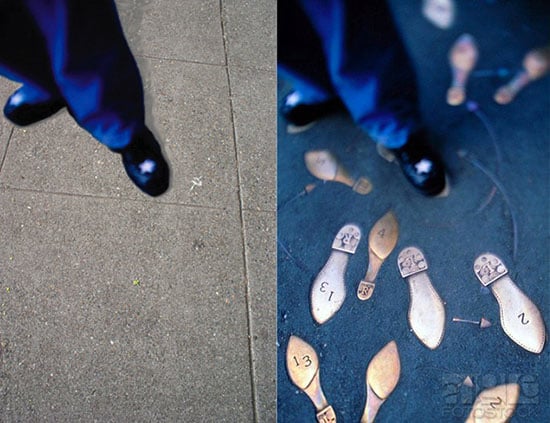 The legal battle between photographer Mike Hipple and sculptor Jack Mackie over a photo of Mackie’s public art piece “Dance Steps on Broadway” has ended with Hipple paying a settlement out of court. Mackie writes,

Anyone can make photographs of any public art and do most anything they want with the photograph. Private photos are most likely not infringements. People can frame them and give them to their uncles and aunts as gifts, they can post them on their facebook pages, or they can make Valentines with them and give them away. What they can not do, and this was the basis for the lawsuit, is offer to commercially sell them, which Mr. Hipple did, at least twice.

[…] The legal issues surrounding this case have always been clear and obvious. Instead of acceding to the clarity of the law, Mr. Hipple attempted numerous defenses. Mr. Hipple pleaded that because my art work is popular I should no longer be allowed to hold copyright. Tell that to Walt Disney. Mr. Hipple pleaded that one can not copyright public art. Tell that to the US Registrar of Copyrights. Mr. Hipple claimed that my art work is “instructional” and that his photograph “depicts dancing.” Taking him up on this argument we produced an image of his photograph containing my Dance Steps juxtaposed to an image of his carefully posed shoe model on a blank sidewalk [shown above]. Does his image without the Steps “depict dancing?” You decide.

Our initial post on this case in early 2010 sparked quite a bit of debate in the comments, with plenty of people arguing both sides.

Artists & Alchemists: A Film About the Revival of Old School Photography

Does Bringing a Camera onto an Airplane Damage Its Sensor?