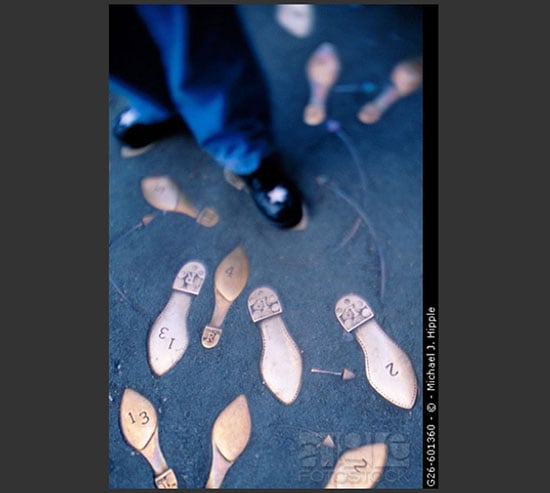 In February 2008, Seattle-based photographer Mike Hipple received a letter from the lawyers of sculptor Jack Mackie that one of his stock photographs infringed upon Mackie’s copyright. Shown above, the photograph includes a portion of Mackie’s “Dance Steps on Broadway”, a public art piece created in 1979 with public funds.

Though the stock agency complied immediately with Mackie’s demands by removing the image and providing a settlement, Mackie is now suing Hipple for “copyright infringement and claiming the full measure of statutory damages, possibly $60,000 or more.” On the blog Hipple set up to collect defense fund donations, he states,

Now if this doesn’t qualify as fair use of the sculpture, I don’t know what does. “Fair Use” is a legal concept that allows a certain amount of copying of someone else’s work—you can get a fuller idea of how it works at the Stanford Fair Use Project website.

Think of it this way: if Mr. Mackie is correct and this isn’t fair use, then he can file a $60,000 law suit against anyone who, when strolling along Capitol Hill, thinks the dance steps are nice and takes a photo or video. He may not find you if you just leave the image on your camera or computer, but as soon as you post it to Facebook, Flickr, YouTube, etc., he can (and apparently will) sue you.

What do you think? Is this a case of copyright infringement or fair use?