It was mid-2011, and I was looking for a way to capitalize on my newfound love of photographing snowflakes. I had thrown the idea to numerous magazine, agencies, and business to see if they would bite. One publication responded favorably, asking me to write an article on spec. If they liked it, they’d consider publishing it. There was immediate excitement and immediate pressure. This could be a huge break for me in the industry.

I ended up writing and re-writing the article with the help of friends with backgrounds in literature and language studies because this had to be perfect. It had to be understandable, approachable, and inspire people to pick up their cameras. The extra effort paid off – it not only became my first major publication, but I also ended up with the cover shot. 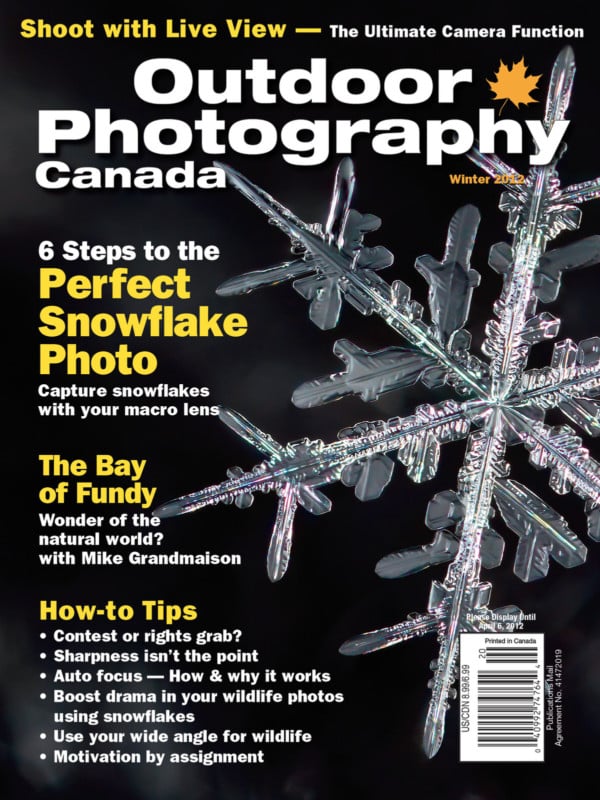 Being in the photography business is… a business. It’s an art, but a background in marketing or advertising is helpful – and that is my formal educational background. A feature article is one thing, but how do I keep my foot in the door for greater opportunities? At the time, the Outdoor Photography Canada website was… archaic. With some background skills in web design, I offered to help update the website and eventually redesign it, now that I had the editor’s ear. Today it stands a little dated, but at the time of the update, it offered a fresh surge to the magazine. The good old days, 2013.

Shortly after, an opportunity existed to start writing for the magazine as a regular contributor, as the author of the “Beginner’s Basics” column was leaving. It was a last-minute deal – I had 48 hours to produce a column with photographs, and I was in as a regular contributor to every issue. Persistence, strategy, and constant useful communication had made me an asset to the company. I’d be paid every quarter, as the magazine published four times a year. A piece of the pie, in a career moving forward to what would become my primary income to support my family. 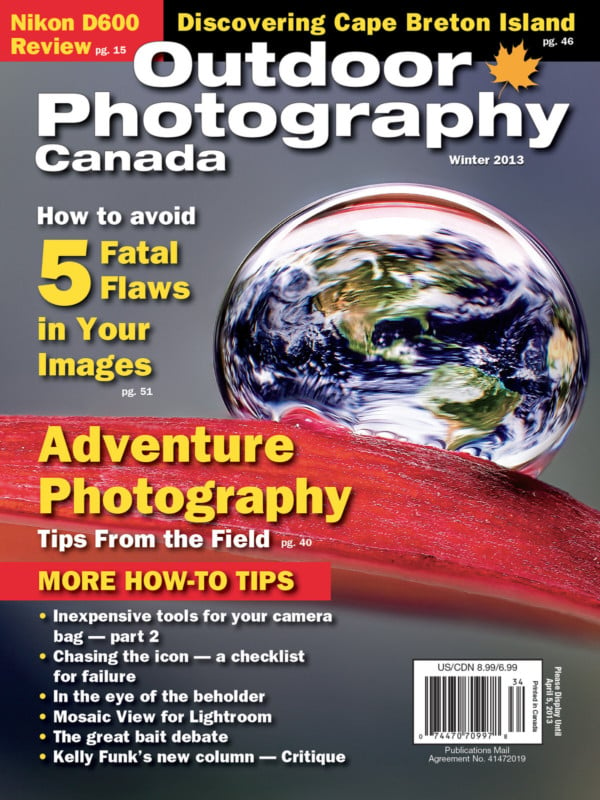 I eventually received another cover shot for a series I wrote about free or cheap things to add to your camera bag, using a Pringles can as a light modifier to shoot controlled light for macro photography – a water droplet refraction of the Earth on a flower petal. Later, I was given a new column called “Pushing Limits”, which allowed me to explore all of the photographic niches I was becoming known for. Every new article was a positive challenge to produce and helped me inspire photographers to think outside the box with extreme macro photography, ultraviolet fluorescence, and much more.

The magazine was a success because of the small footprint. The core entity was one person: Roy Ramsay who headed the publishing corporation Sunlight Media. Contributors were well paid, and some additional outsourced staff held minor roles to put everything together, but Roy worked to keep the costs as low as possible while paying the contributors as much as he could. Quality content was far more valuable than making the magazine filled with an annoying level of advertisements to make a final product, and the readers agreed: it was worth the subscription for the level of content. That said, it’s 2019. Subscriptions are down, print media is dying a slow death, and even the most efficient operations are watching the clock. 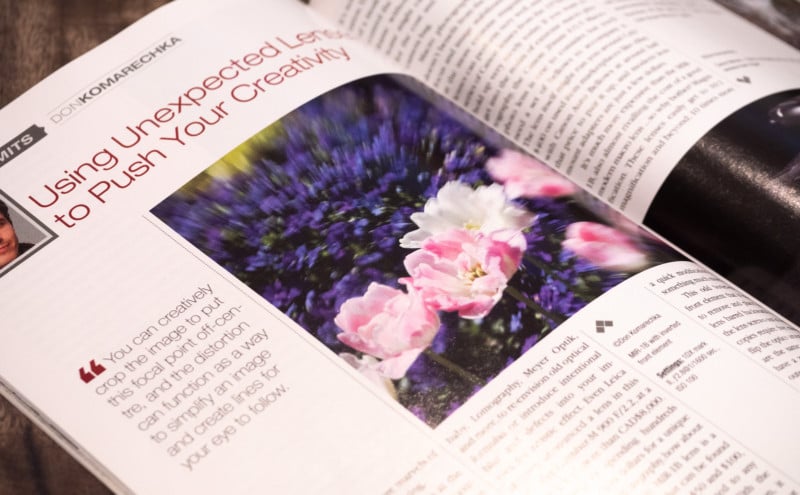 The phone call came. The latest issue wasn’t published due to lack of funds and there would be no more. I hadn’t realized the lack of a new issue in the chaos of my professional life – they arrive, I put them in a magazine rack after reading through for an hour or two, and they sit for anyone in my studio to explore after that. Easy to miss this experience when I can’t keep up with all the work in a day. Those slices of the pie had become so diverse, so expanded, that I wasn’t sure what I would be doing from one day to the next.

Since I was still maintaining the website for updates, I was tasked to write the notice to say to everyone that the publication Outdoor Photography Canada would be shutting down. It was a somber moment.

Having worked with the magazine for over seven years, the publication opened doors for me, helped build my credibility as a photographer and author, and helped pay the bills. Popular Photography and American Photo shut their doors, Shutterbug is now online-only as are many others. Smaller magazines have been closing up shop for years – shout out to Tristan Hall & PhotoComment Magazine that started in 2009 and shut down in 2014. The opportunities I enjoyed are fewer and farther between in print – but where do you go from there?

It’s easy to see the irrelevancy of print media today with so much education and editorial content online for free, often curated and collected in places like PetaPixel. Advertisers are adapting and changing strategies, and photographers are finding more independent ways to reach customers via social media to promote workshops, books, and apps.

Arguably there are more ways than ever to make money as a photographer: workshops, speaking engagements, prints and printing services, commissioned work and licensing, copyright settlements, self-publishing, sponsorships, contests, grants, mentorship, courses and tutorials, heck I’ll even clean your camera sensor if you’re in my neighborhood. I even made and sold Christmas tree ornaments based on a 3D model made from one of my snowflake photographs, bringing it full circle to my first cover shot on Issue 20 of Outdoor Photography Canada Magazine. I couldn’t have predicted how powerful one single event would be on the course of my career. Farewell OPC – we had a fun adventure that started me down a path that has lead my images to be featured in museums, documentaries and even on Canadian currency. It all started with a letter to the editor.