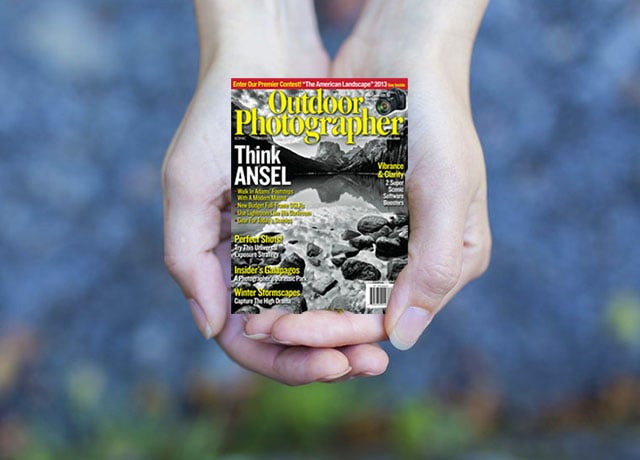 If you’re a fan of Outdoor Photographer magazine and have been hearing murmurings of the publications demise over the past day, here’s some good news: the magazine isn’t dead — it was just sold.

Discussion about the fate of the magazine was sparked yesterday when renowned photographer and longtime Outdoor Magazine columnist Bob Krist posted a message on Facebook saying that the magazine “may have bitten the dust.”

Krist shared that he and other columnists hadn’t been paid in nearly a year, that his last check bounced, and that staff emails at the magazine were also bouncing. 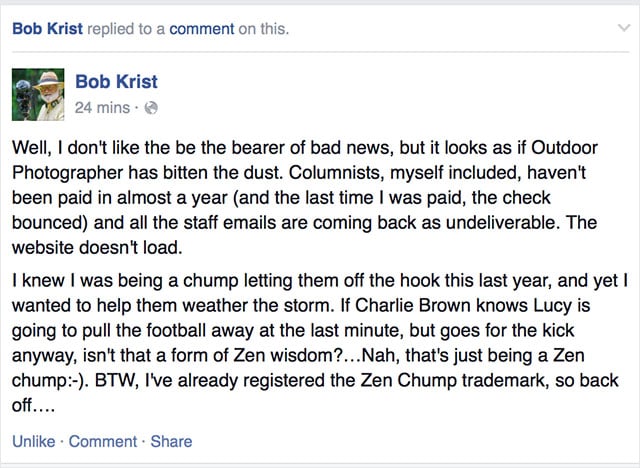 “Nobody is telling me, a longtime columnist, anything,” Krist tells PetaPixel. “And they are three columns behind in paying me.”

We did some digging on Krist’s behalf, and it looks like the missed payments and broken email addresses may all be the result of a messily-handled acquisition.

It turns out the Los Angeles-based Werner Publishing Company has sold six of its magazine titles to the Boston-based publishing company Madavor Media. Three of those magazines are photo-industry titles: Outdoor Photographer, Digital Photo, and Digital Photo Pro.

A number of “key members” from Werner have been hired by Madavor as part of the transition, and the team is settling into new offices in Santa Monica, California. Madavor says it’s planning to use the newly acquired magazines to create a new “Creative Group” of magazines in addition to its growing “Enthusiast Group” of titles.”

“I’m not sure why the emails that Bob has sent were returned undeliverable, as there are forwards in place to deliver mail to our new addresses, but it is a technical reason, not a deliberate one,” a spokesperson for Madavor told us. “Contributors like Bob are very important to us, and I will be contacting them soon.”

“As I mentioned, the acquisition is quite recent and we are still working through the details.”

5 Steps to Making a Magical Animal-Filled Forest with Photoshop