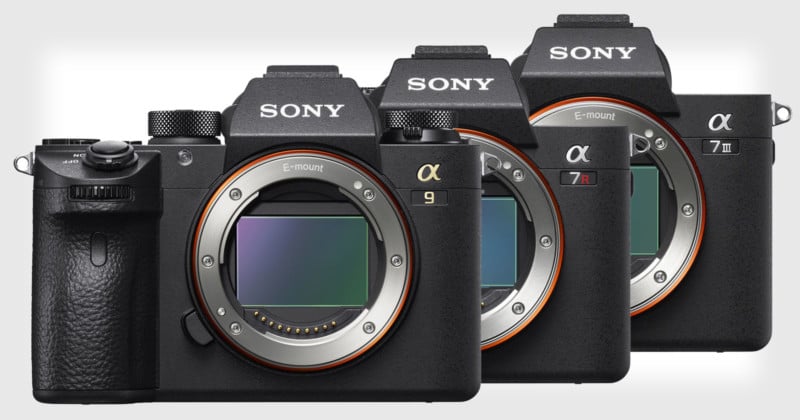 Sony has just announced major upcoming firmware updates to the a9, a7R III, and a7 III mirrorless cameras that will include improved autofocus performance and features.

Firmware version 5.0 for the Sony a9 camera will add Sony’s new “Real-time Tracking” mode for object tracking and “Real-time Eye AF” for eye tracking, both of which were just announced in the new Sony a6400.

“In addition, ‘Tracking On’ helps initiate real-time tracking at any time by simply pressing a custom-assigned button and “Touch Tracking,” which quickly activates through the touch screen.”

Real-time Eye AF is the latest iteration of Sony’s Eye AF technology, and it “employs AI-based object recognition to detect and process eye location data in real time, resulting in improved accuracy, speed and tracking performance of Eye AF,” Sony says. “In all autofocus modes, the camera can automatically detect the eyes of the subject and activate Eye AF with a half press of the shutter button, and the camera will seamlessly track the eyes at all times when in AF-C mode.

“The new firmware will also enable photographers to select the preferred eye (left or right) of their subject as the focus point.”

There are other focusing capabilities that are showing up in the new firmware, including Touch Pad, Touch Tracking, an extended phase-detection AF aperture range (from f/11 to f/16), and Fast Hybrid AF for video.

Sony says image quality is also getting a boost in firmware v5.0, especially when it comes to color reproduction.

“The camera will more accurately account for subtle changes in light for smoother, more natural tonal gradations in elements like the sky,” Sony says. “There is a new auto white balance algorithm that gets added as well, which produces more consistently balanced images while burst shooting.”

v5.0 also makes the a9 compatible with Sony’s new Imaging Edge Mobile app, which replaced the PlayMemories Mobile app. The new app has a “Transfer & Tagging add-on” function that lets photographers transfer photos to smartphones during capture using FTP (and includes IPTC metadata in those images).

Other features in the update include menu improvements and photo rating/protect functions.

After v5.0, firmware v6.0 for the a9 will expand Eye AF to include animal eyes, “an exciting new feature for wildlife photographers that will enable interval shooting functionality for creating time-lapse movies,” Sony says.

The a7R III and a7 III aren’t getting the new Real-time Tracking mode, but they’ll both be receiving Real-time Eye AF in the upcoming firmware v3.0.

“This will be available in AF-C mode with a simple half-press of the shutter button,” Sony says. “Real-Time Eye AF for animals will also be available.”

Other improvements in the update include interval recording for time-lapse movies (1 to 9999 shots with intervals of 1 to 60 seconds and AE tracking),

How to Light Nighttime Portraits With Only a Phone Flashlight