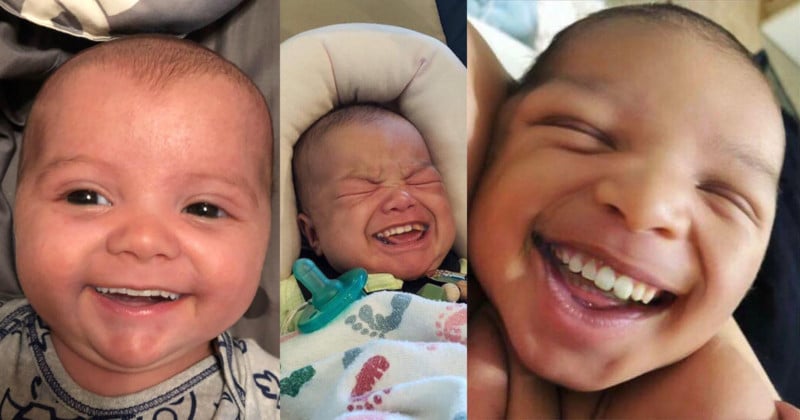 If you need a chuckle today (or a nightmare tonight), there’s a strange new photo project you can check out called Babies With Teeth. As its name suggests, each of the bizarre photos shows an infant with grown-up teeth ‘Photoshopped’ into their tiny mouths.

The project is the brainchild of Texas photographer Ashley Evans, and it all started while she was playing around in an app called YouApp.

“I had an app and wanted to see what my son looked like with teeth,” Evans tells PetaPixel. “It was hilarious so I did it to my daughter. I then posted in a Facebook group and it just blew up from there.”

After seeing Evans’ photos, a lot of people began sending her baby photos to add teeth to. She then started a dedicated Facebook page for the project and began writing captions about each baby as if they were an adult.

Some of the babies are edited in Photoshop, while others are roughly teeth-ified using the app.

“I like that it makes everyone laugh,” Evans says. “I think it would be cool to start selling mugs, cards, calendars, etc. and use the money to help fund dental treatment for people who can’t afford it. I definitely don’t want to profit from it.

“I keep it going because it seems like a lot of people think it’s funny and I think it’s important to laugh.”

You can find more of these photos and follow along with the project on the Babies with Teeth Facebook page.

Loupedeck Can Now Be Used for Photo Editing in Photoshop

The Dark Truth Behind the Sensor Size War