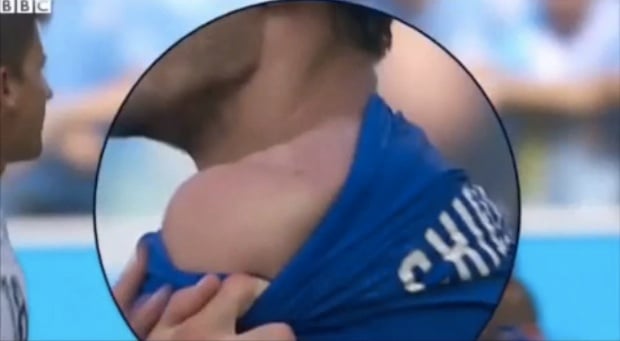 This has got to be one of the stranger Photoshop controversies we’ve ever run across. Usually, Photoshop in the mainstream news means that some model or celebrity has been poorly altered on a magazine cover, but this time around, it’s a football star going after Photoshop, saying it’s being used in a smear campaign against him.

Luis Suarez, a Uruguayan football star with a biting reputation (pun intended), allegedly bit rival Italian player Giorgio Chiellini in a World Cup match on Wednesday, leading to a media frenzy and a four-month ban from ‘any football-related activity’ handed down by the sport’s governing body FIFA.

But Suarez’ lawyer and Uruguay’s football association says the incident, which you can see in the Vine below, has been blown out of proportion and exacerbated by liberal Photoshopping:

The main picture of the incident, which you can see by clicking here, was taken as Chiellini pulled down his shirt immediately after the bite to show the teeth marks on his shoulder. But Uruguay’s football association — which, to be fair, has a decided interest in keeping the country’s most important player off the bench — claims the photo has been Photoshopped to make the bite mark look worse than it is.

The association told The Guardian they would use “all the arguments possible so that Luis gets out in the best possible way,” but Suarez reputation isn’t helping things. This is actually the third alleged biting incident he’s gotten himself wrapped up in, making the question of how severe the bite really is seem a bit erroneous.

Still, from a photojournalistic standpoint, if the image in question — which was taken by Maurizio Borsari and licensed through the Rex press agency — has been Photoshopped to make the bite marks stand out, that could be considered a serious breach of photojournalistic ethics… opening up a whole different can of worms.