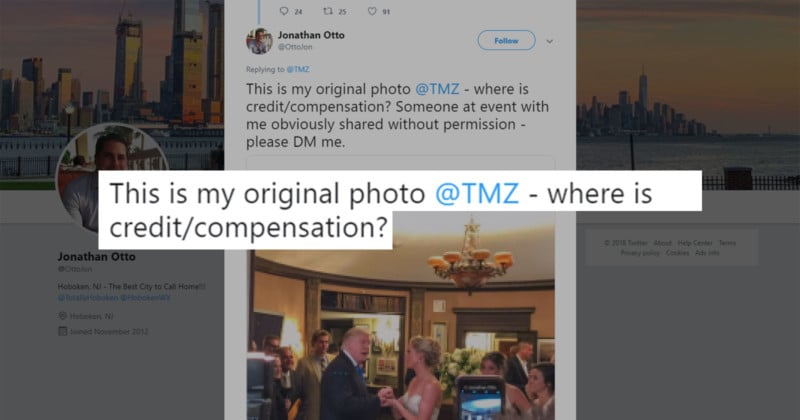 With the explosion of social media and photo sharing, personal pictures commonly go viral and make their way onto major news websites, sometimes without the photographers’ permission. But a judge has just ruled that media companies can’t simply steal social media photos whenever they see fit.


The Hollywood Reporter reports that the whole case started back in on June 10th, 2017, when President Donald Trump crashed a wedding taking place at his Trump National Golf Club in Bedminster, New Jersey.

Deutsche Bank VP Jonathan Otto was in attendance, and he snapped photos of the scene with his iPhone.

He then sent one of them to another wedding guest, who sent it to others, and eventually it was posted by a relative of the bride to Instagram, where it was discovered by the media.

From there, the photo went viral the next day, appearing on websites ranging from CNN and The Washington Post to The Daily Mail and TMZ — all without Otto’s permission.

Otto reached out to sites with proof that the photos were his and asking them to contact him.

This is my original photo @TMZ – where is credit/compensation? Someone at event with me obviously shared without permission – please DM me. pic.twitter.com/wGibY0vI8h

After discovering that the media companies had taken his photos from Instagram, Otto lawyered up and filed copyright infringement lawsuits, one of which was against Esquire magazine and its parent company, the mass media giant Hearst Communications. Esquire had run the photos in a (since deleted) story titled “President Trump Is the Ultimate Wedding Crasher.” 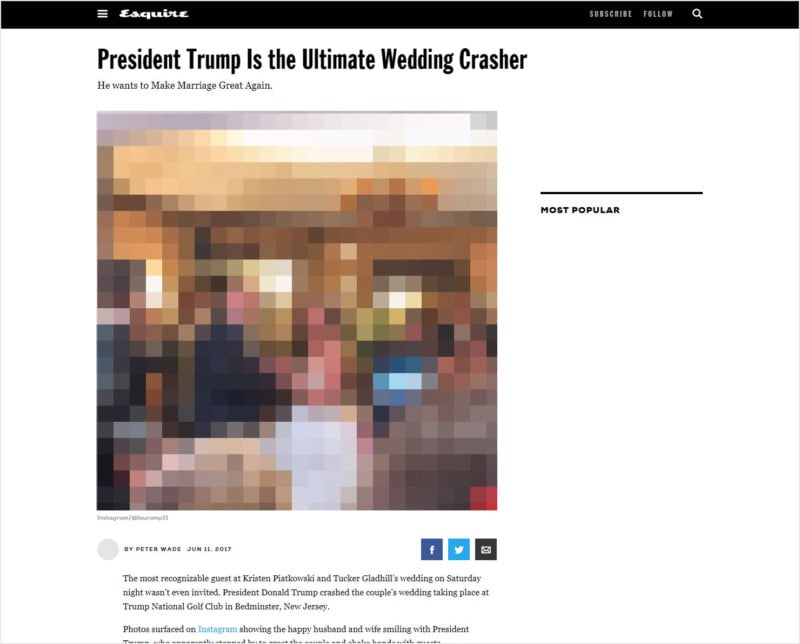 Four media companies settled with Otto, but Hearst’s lawyers argued that the usage was fair use, saying that Otto had taken his photo for personal use while Esquire had used it for news.

“Stealing a copyrighted photograph to illustrate a news article, without adding new understanding or meaning to the work, does not transform its purpose — regardless of whether that photograph was created for commercial or personal use,” Woods writes in his decision. “It would be antithetical to the purposes of copyright protection to allow media companies to steal personal images and benefit from the fair use defense by simply inserting the photo in an article which only recites factual information — much of which can be gleaned from the photograph itself.

“If so, amateur photographers would be discouraged from creating works and there would be no incentive for publishers to create their own content to illustrate articles: why pay to create or license photographs if all personal images posted on social media are free grist for use by media companies, as Hearst argues here?”

Woods also states that seeing how viral the photos went, there was indeed a market for Otto’s work — he could have profited from licensing the photos had the media not taken them without asking.

You can read the 31-page decision for yourself here:

In denying Hearst’s motion for summary judgment, Woods has now allowed the case to move to a jury.