“Color science” is a term that’s thrown around a lot these days when discussing the merits of various digital cameras and brands, but how much of it is real color differences and preferences, and how much of it is simply brand loyalty? Tony Northrup recently conducted a blind poll of 1,500 photographers to find out.

Northrup started by asking respondents which brand they believe has the best color. About 70% of people had a preference, and the top brands were Canon, Fujifilm, Nikon, and Sony, in that order. 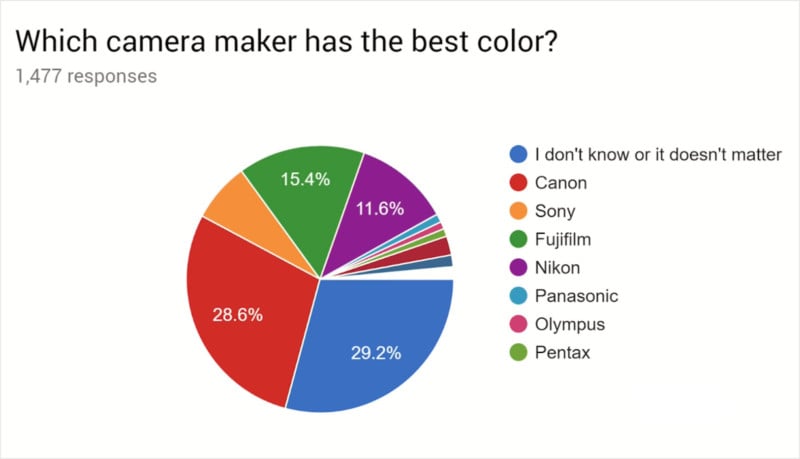 But to test for inherent bias and brand loyalty, Northrup included a tricky question in the poll. He asked photographers to rank the same set of four photos twice, once with number labels and once with a rearranged order and meaningless brand labels (the brand labels didn’t actually correspond to which camera shot which photo).

What Northrup found was that almost none of the photographers ranked the same four photos in the same order both times. Only 8% of people picked the same favorites between the two sets.

“It turns out people have really strong brand loyalties,” Northrup says. “You love your brand.”

Northrup also found that proper white balance appears to be more important than a camera’s “color science.” After applying the exact same white balance to photos captured with the four cameras, preferences instantly evened out between the four brands.

After aggregating all the responses, Northrup was surprised by the results: photographers overwhelmingly preferred the photos captured with a Sony camera, followed by Fujifilm, Nikon, and Canon, in that order. 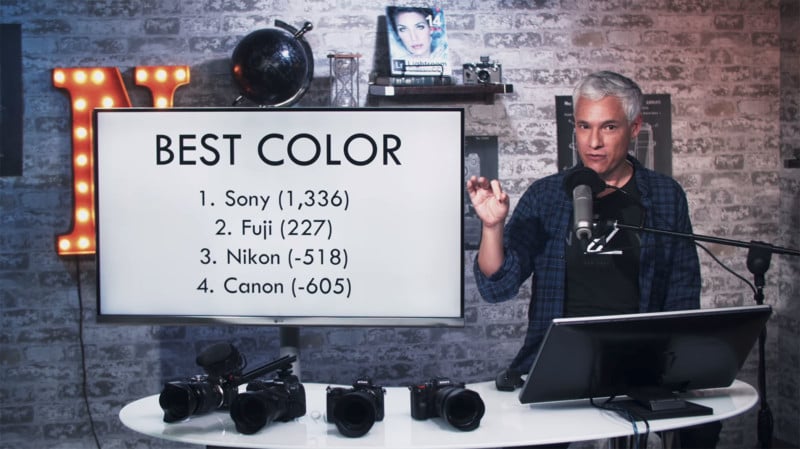 “Color is like wine,” Northrup says. “People talk a lot about how important color science is, but when I gave them a blind side-by-side test and asked them to pick their favorites, the results were not at all what they thought.”

P.S. The top comment in response to Northrup’s video is gold.

“My Canon has colors grounded in deep blackberry tones with shades of lemon, anise and cherry… with a back pallet of oakiness,” writes photographer Ed Ruttledge. “It is low in tannin producing a smooth silky quality to the final image reminiscent of under-exposed Kodachrome…﻿”