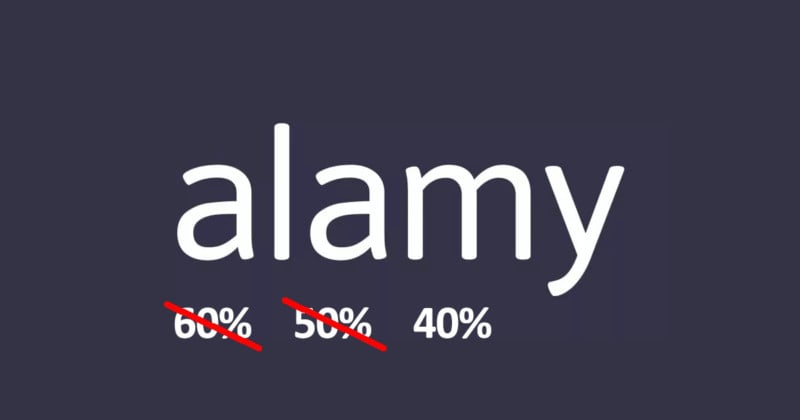 Alamy announced in an email to contributors today that the commission rate for stock photo sales is being slashed from 50% to 40% starting in February 2019.

Here’s what the email said:

In February 2019 the Alamy contract will be changing to reflect a new commission structure. The commission contributors receive for direct sales will change from 50% to 40%.

This email is to give you advanced warning of this upcoming contract change. You will receive another email in January 2019 signalling the beginning of the standard 45 day notice period before the new contract comes into effect in February 2019.

While it was originally known for offering a majority of each sale to contributing photographers (even as high as an unheard-of 90% in the beginning), Alamy dropped the 60% commission to 50% back in 2010-2012 citing a need to invest in R&D, new products and services, and new marketing initiatives.

Now the 50% commission is being cut further to a minority share of 40%. Alamy CEO James West took to YouTube today in a 13-minute video explaining the change.

“It’s kind of a significant move away from where we have been historically, which is to be on equal footing with our photographers, and in fact our origin was to always pay the lion’s share of royalties,” West says.

West also says Alamy started with the unusual approach of paying contributors a much higher royalty than anyone else in the industry, which brought Alamy early success.

“The thing that we got wrong — and I was pretty naive about with hindsight — was the royalty split,” West says. “I thought we could charge a fraction of that of our competitors and so we started it paying contributors 90% royalties with some transaction fees on top of that.”

“If we hadn’t reduced the royalty as we did in 2010, we would not have been able to invest in the things that led to ultimately the results we’ve achieved in the last 3 years,” West says.

Alamy has also been able to stay nimble thanks to staying private and not taking on any debt for its growth and operations. But due to growing uncertainties in the global economy and because there are new things Alamy wants to invest in, Alamy believes dropping its commission rate again is a “good move.”

After the change, Alamy will still be offering a higher commission than its competitors, West says, adding that he believes this may be the last commission rate drop Alamy will need to do.

Update on 12/18/18: Alamy has changed course and will be keeping the commission rate at 50%. Here’s an email that was sent out:

We recently sent an email regarding a change in the commission structure at Alamy where the commission contributors receive for direct sales will change from 50% to 40% in February 2019.

After careful review, and taking into consideration photographer feedback, we have come to the decision that images exclusive to Alamy will remain at 50%.

Our CEO James West has explained the exclusivity commission in further detail in a video which you can view, and leave comments on below.