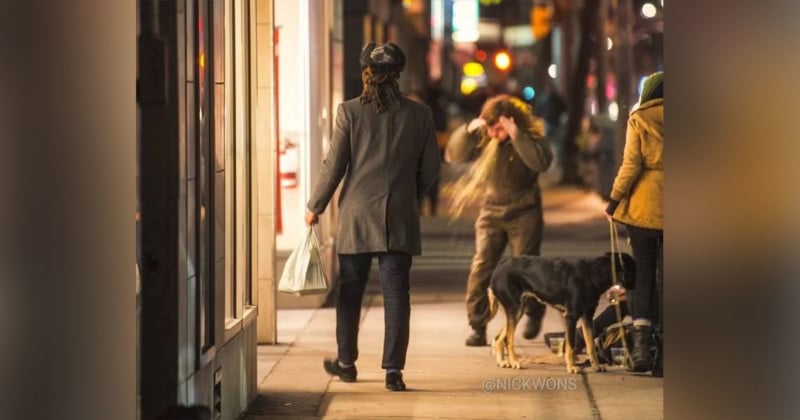 If you’re easily grossed out, you might want to close this story now. It’s about one of the most viral and popular street photos that was shared on the Internet this month, and it’s definitely an… unusual one.

This past weekend, Toronto professional photographer Nick Wons was testing out the low-light performance of his new Nikkor 70-200mm f/2.8 FL VR lens by shooting some nighttime photos indoors and on the street. When he noticed a man walking away, he raised his camera to snap a shot.

“[I was] just taking a shot of the guy walking, I didn’t think much of it or that it would turn into anything but I wanted to test the lens out (you know how it is with new toys),” Wons tells PetaPixel. “Anyways, as I’m shooting this guy walking, out of nowhere comes the guy on the right side of the frame and just sprayed the whole sidewalk in a semi-circle around him narrowly missing the subject I was focused on.” 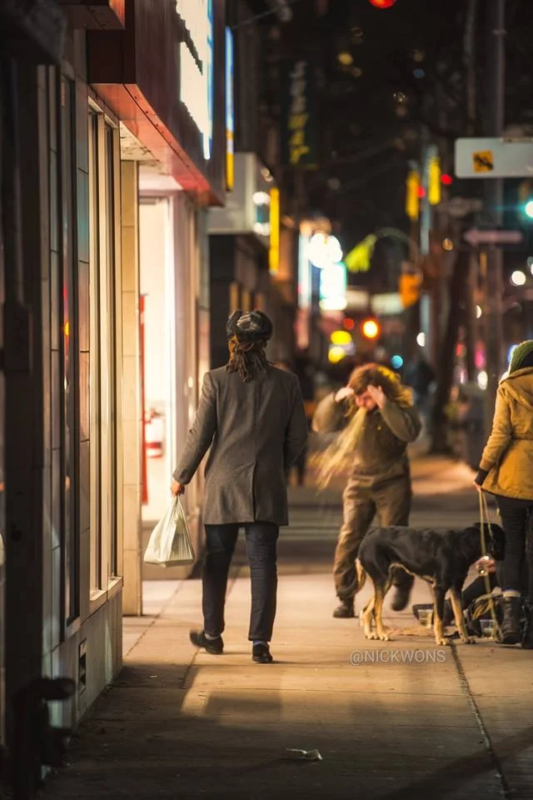 Wons has been shooting street photography for years, but he’s never had an experience or photo quite like this.

“[A]s a full-time event photographer, I find the randomness of the streets keeps my skills sharp when it comes to catching fleeting moments or anticipating a shot,” Wons says. “Never in the 10 years that I’ve been shooting have I ever had a random somebody ‘photobarf’ a shot like that.

“To me, it’s a pretty raw and real image, and it’s not something you ever really see captured — at least I haven’t before.”

After posting it to a local Toronto Facebook group, others began telling Wons to share the photo on Reddit. So he did, sharing it in /r/pics with the title, “Just shot my first street photography photo where somebody randomly walked into frame projectile vomiting.”

Within 2 hours, the post hit the front page and went viral online. It now has over 147,000 upvotes, making it (strangely) one of the most popular photos of the year in that subreddit that nearly 20 million “photographers” subscribe to.

“You should submit this to national geographics photo contest,” the top commenter writes. “First place guaranteed!”

“Bro… as one photographer to another, this might be one of the greatest street-life photos I’ve seen in a long time,” writes another photographer.

The huge amount of attention even got Wons connected to the vomiting man, whose name is “Chucky.” They’re friends now.

“I had no idea it was going to blow up like this though,” Wons says. “I went to bed and woke up to 131k Karma, texts from friends, and a flooded inbox on all my social media with requests from around the world to buy prints of the shot.”

That’s right. People around the world want to buy prints of this projectile vomit street photo.

“It’s a pretty surreal response to this photo, but I guess it’s because it’s such a ‘city moment’ that doesn’t get captured that people are reacting like this,” Wons says, “because at some point we’ve all been there I’m sure, maybe not puking on the sidewalk a few feet down with a new Nikkor telephoto (thank God), but we’ve been there.”

“This photo though just goes to show why I always walk around with my camera out and on and at the ready, because you never know what’s going to happen next.”