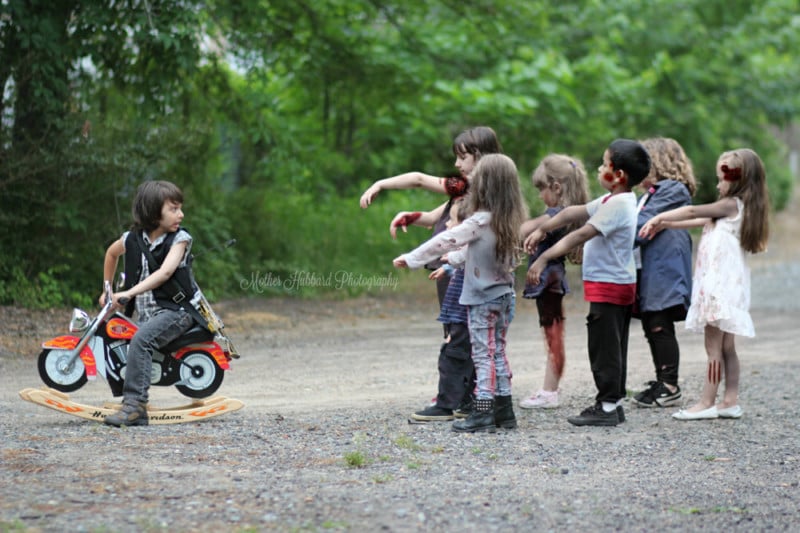 New Jersey photographer Alana Hubbard found herself at the center of a massive controversy after her Walking Dead children’s cosplay photos went viral. But despite the photos being called everything from “sick” to “disturbing,” the photographer told PetaPixel that she stands behind the photos she took.

The initial idea was simple: capture the story of the Walking Dead with children, including Alana’s own 5-year-old son and 3-year-old daughter, cast as the characters.

Each shot would represent a pivotal scene in the story: Darrel escaping from a pack of zombies on a motorcycle, Negan holding (and using) a baseball bat covered in barbed wire, and (most controversially), Carol shooting the young Lizzie in the back of the head, just to name a few. 24 kids, one photographer, and several hours later, the first part of what would be a multi-day shoot was done: 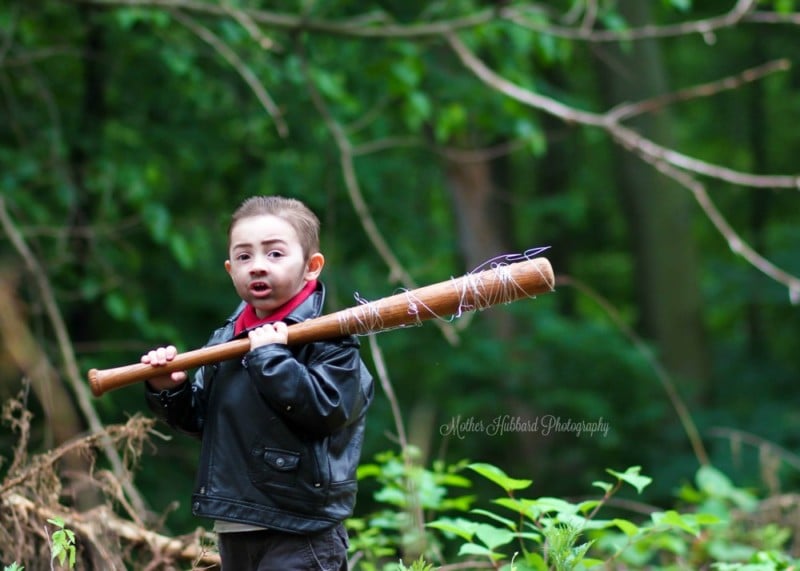 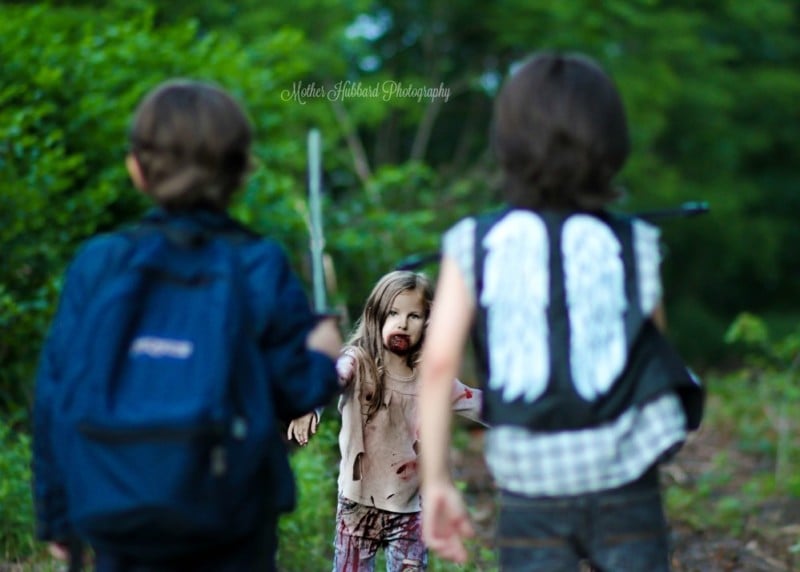 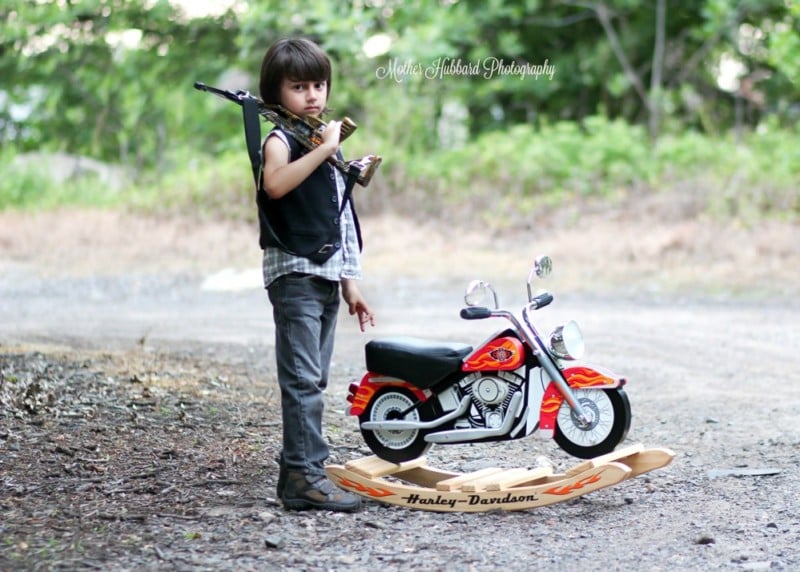 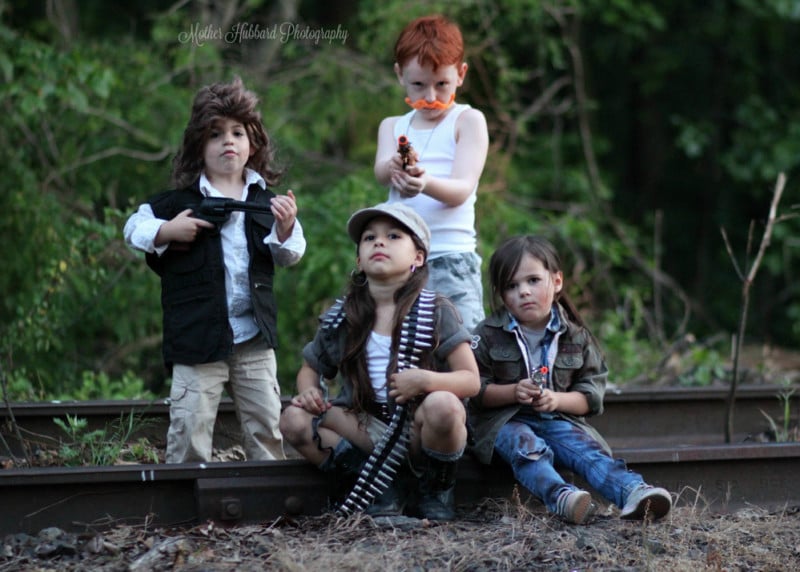 But what began as a simple homage to the AMC show turned into an emotional rollercoaster when her photos went viral and sparked outrage across the Web. People called her insensitive, posted photos of dead kids on her Facebook page, and eventually got her banned (temporarily) from the social network where she attracts a large part of her business.

Alana, however, has not capitulated to her critics; she stands behind her photo shoot. Speaking with PetaPixel over the phone earlier today, she explained why she feels the critics had no right to react the way they did.

“I put a disclaimer on each individual photo and the album itself, and Facebook did something I’ve never seen before, blurring out the photos so you had to click to see them,” Alana told us. “In order to see my photos, at least before the media got ahold of them, you had to go to my page, find the album, go past the warnings, AND click the photos.”

“People had no right to complain, because nobody asked them to come and look at my photos” she continued. “If they choose to ignore the warnings, to make the adult decision to look at the photos, then they need to be an adult about it and respect my art.”

Despite plenty of accusations to the contrary, Alana maintains that she didn’t do this this photo shoot for shock value or to go viral. “I’ve gone viral before,” she tells PetaPixel. “It doesn’t do as much for you as people think.”

“The funny thing is, the last time I went viral in 2014 I was the ‘heart of gold’ lady because of a photo shoot I did for a young cancer patient,” she says, “now I’m some sort of ‘villain’ or something.” 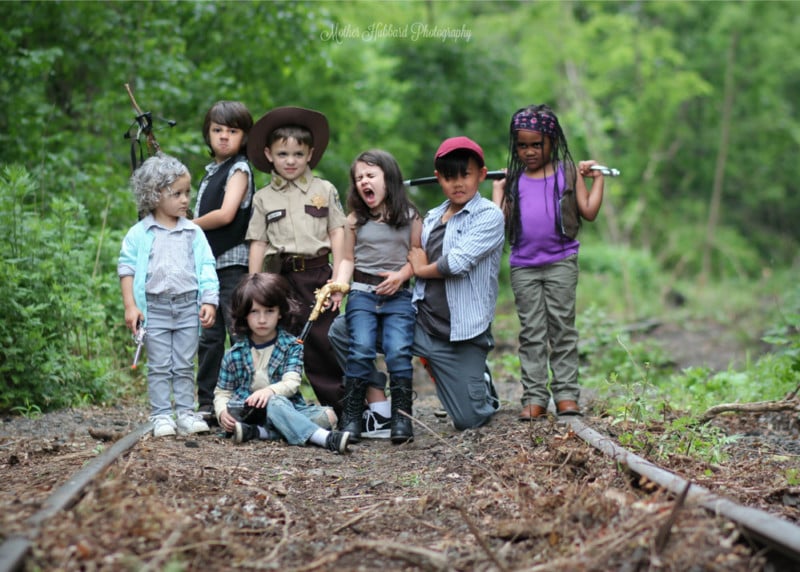 Of course, not all (or even most) of this experience has been negative. For one, the story has taken her “around the world” as she put it. “It’s been covered on every continent except Antarctica,” she explained, listing off publications in far-away countries she’s been in touch with. “I got a call at 3am from Hong Kong!”

Plus there was praise from some of The Walking Dead actors and the show’s website, which contacted her to ask about publishing the photos.

But the experience has still been a demoralizing one, particularly where the photography community is concerned. “In every single photography group I’m in, there were photographers making memes about me, bragging about how they’re reporting me to social services and the FBI, and about how my photos are terrible, and I’m a terrible photographer,” says Alana. “Instead of coming together in solidarity to fight against censorship, most photographers decided to be catty, jealous, and hateful.

“I just don’t understand the hate,” she lamented as we wrapped up our call. “Feeling abandoned by the photography community is very hard.”

To see the full Walking Dead album on Facebook, click here. And if you want to see more of Alana’s work, you can find Mother Hubbard Photography on the Web and through Facebook.

I Swallowed a 64GB microSD Card