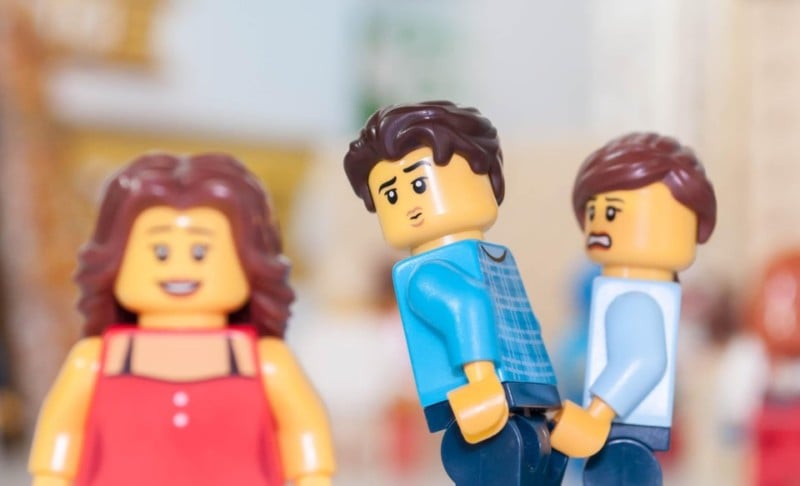 One of the most viral photos of 2017 was the “Distracted Boyfriend” stock photo that has widely been used as an Internet meme. Photographer Dylan Maithonis faithfully recreated that famous photo using LEGO.

In case you somehow haven’t seen it yet, here’s the original stock photo by photographer Antonio Guillem, a 45-year-old professional advertising photographer based in Barcelona, Spain:

Maithonis loves memes, LEGO, and photography, so he decided to combine all three by remaking Guillem’s shot.

“I made this shot because the boyfriend’s face piece was newly introduced and I thought it was perfect for recreating the meme,” Maithonis tells PetaPixel. “After the inspiration I ordered the rest of the parts off BrickLink, such as the hair pieces, the body pieces and the girl’s heads, to make it look more true to the meme.”

Once he had all the pieces he needed, Maithonis built a tabletop set with the three minifigs and the city background (with some other passersby as well). The photo was shot using a Nikon D300 DSLR, a Nikon 18-55mm lens, and a Yongnuo off-camera flash.

Maithonis is a Northern California-based photographer who mainly shoots birds, but this latest project has inspired him to do more with LEGO.

“I am thinking about recreating more LEGO scenes (not only memes) but I’ll have to work on my technique and use of flash,” he says.

Graduated ND Filters vs Multiple Exposures: Which is Best and When?