There was a terrifying crash at the Macau Grand Prix on Sunday. 17-year-old Formula 3 driver Sophia Floersch crashed, went airborne, and slammed directly into a photographers’ box. And it was all caught on camera.


The video above and the two below show the 168mph (270km/h) wreck from different angles.

A crash in the Formula 3 Macau Grand Prix has to be seen to be believed. Early reports suggest everyone involved survived. pic.twitter.com/jc4TXOdNn0

Floersch survived the crash and later underwent surgery after being diagnosed with a spinal fracture. Another driver, a marshal, and two photographers were also hospitalized.

Just wanted to let everybody know that I am fine but will be going into Surgery tomorow morning. Thanks to the @fia and @hwaag_official @MercedesAMGF1 who are taking great care of me.
Thanks to everybody for the Supporting messages.
Update soon.

Hong Kong-based Australian photographer Christiaan Hart was one of the five photographers inside the box when the crash occurred.

“Everything happened so fast, the sound was horrific,” Hart tells PetaPixel. “One minute you are shooting the next thing we were all picking ourselves up off the floor, the impact threw us down, camera gear and bags were all over the place.” 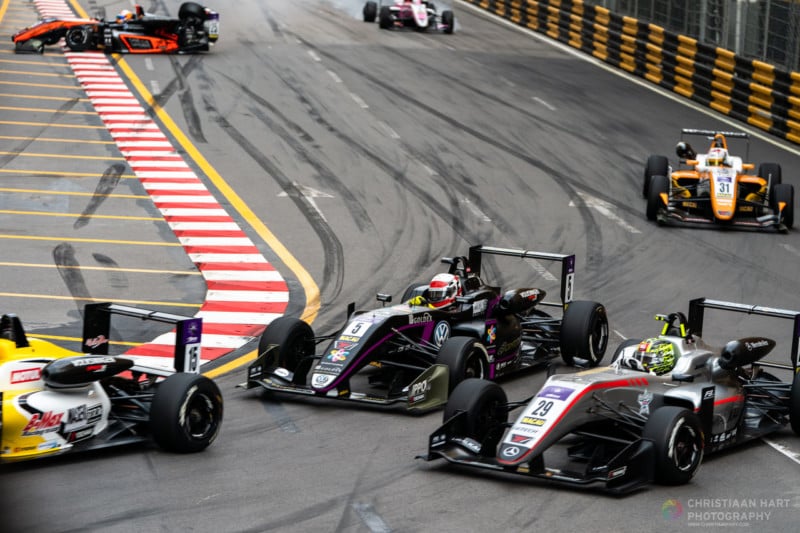 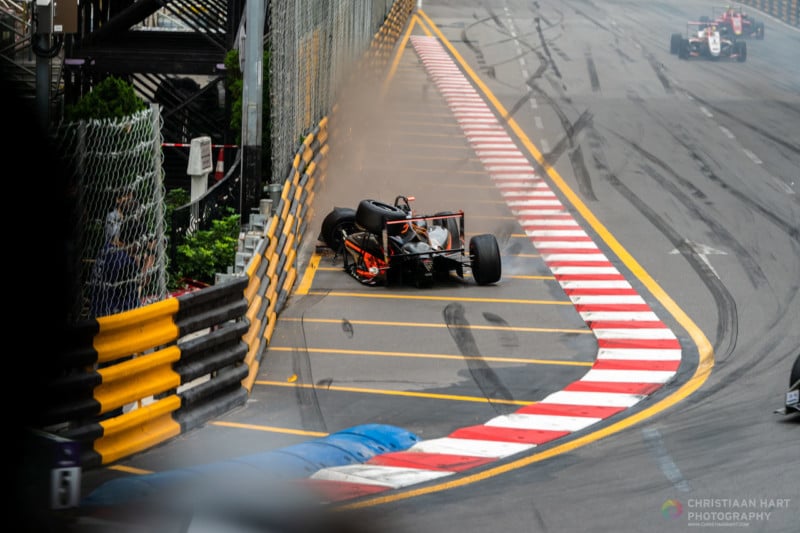 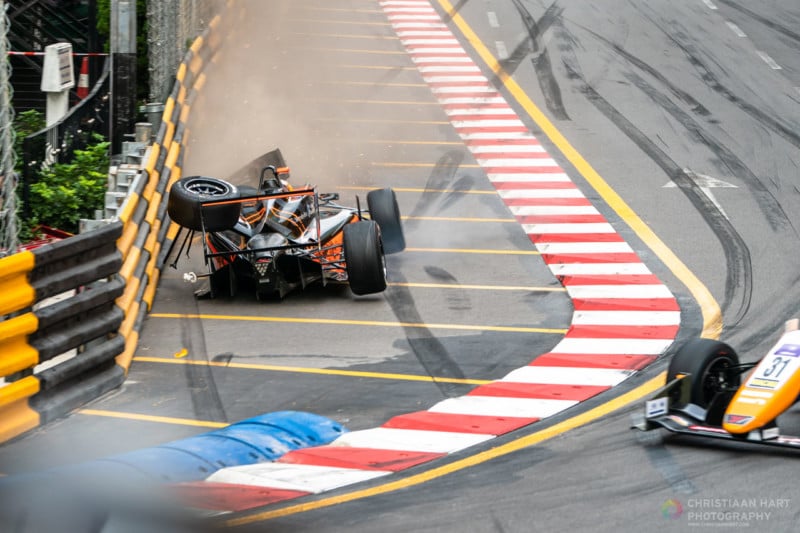 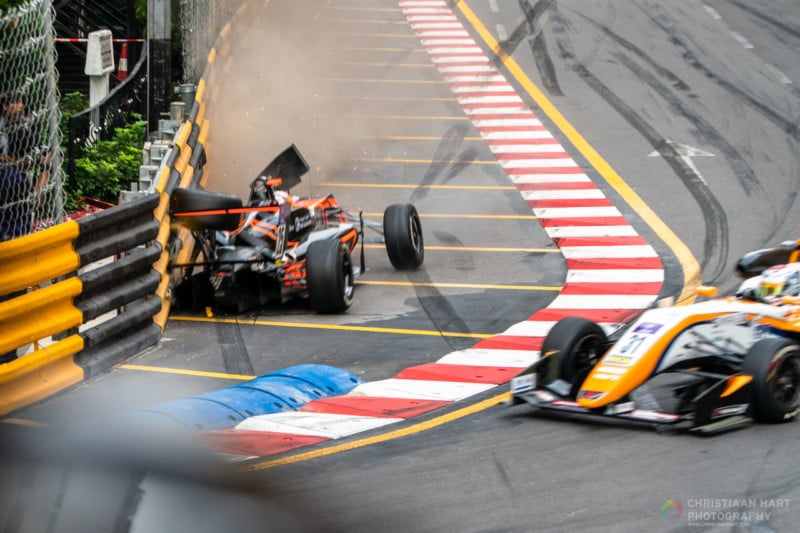 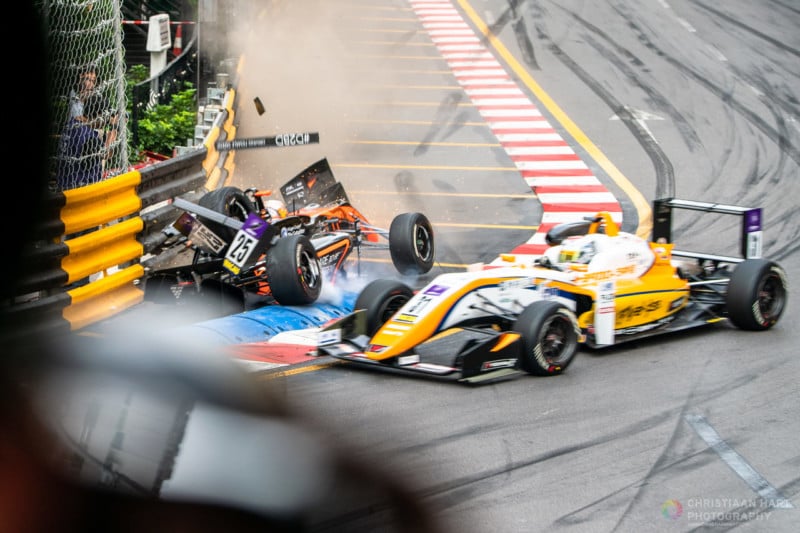 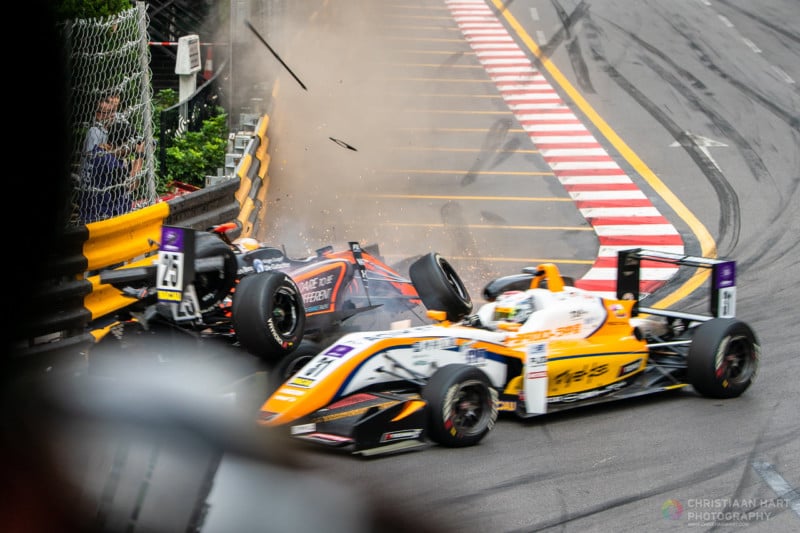 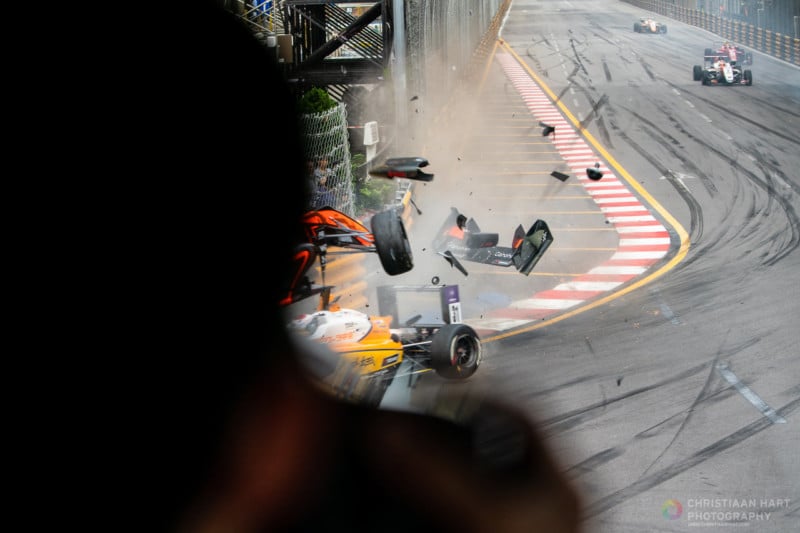 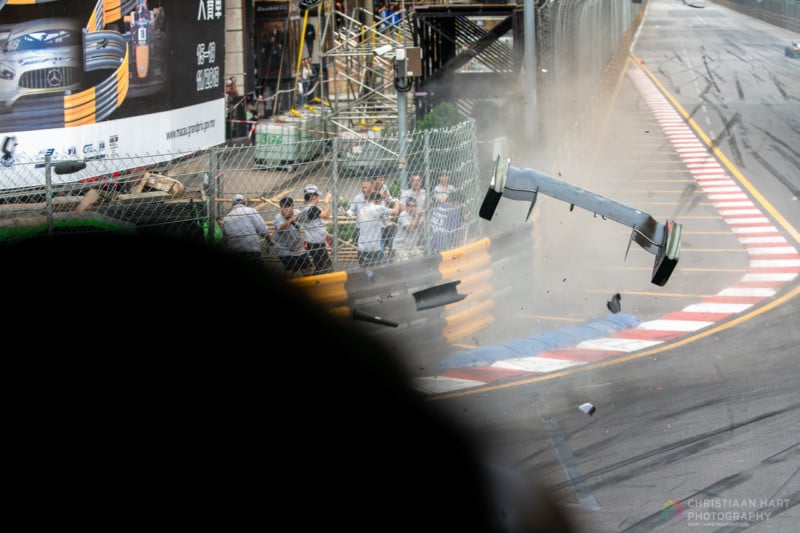 “Lisboa is a famous corner as the cars come off a huge straight into a tight right-hand corner,” Hart says. “It’s where the action is most likely to happen. No one, though, expected the seriousness of that crash.

“To get into the bunker we need to apply for slots — I had done this a few days earlier. Shooting at this corner you either go with long glass to capture the cars down the straight and then switch cameras to a wider option to capture the corner. At the time of the crash, I was on the Sony a9 with the 70-200mm. I managed to get most of what happened.

“The structure thankfully was built strong enough and did its job. It was a total mess inside. I believe it also saved Sophia’s car from ending up over another fence into the building behind.”

“If we [had been] shooting from the left side, I hate to think of what could have happened — that side took the full force,” Hart says. “Luckily no injuries for myself. One photographer was taken to the hospital that I know of. I believe he had some concussion.” 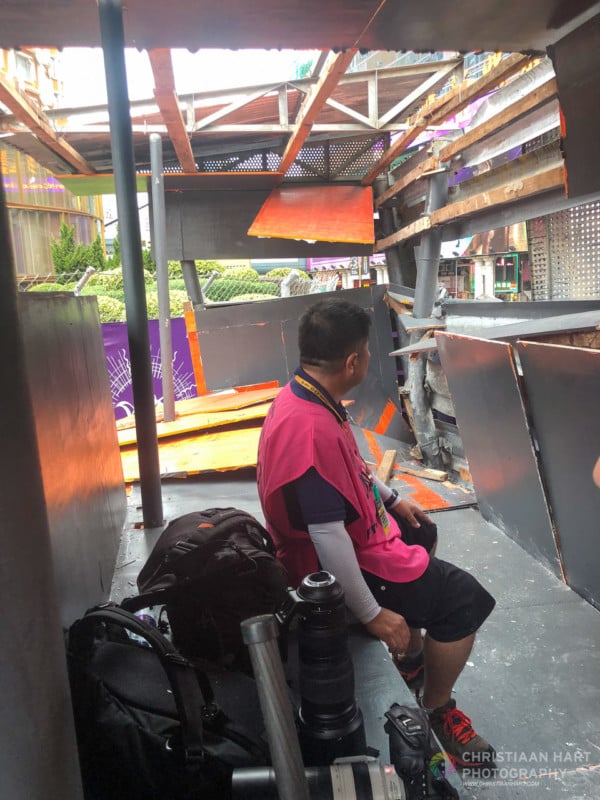 “Thankfully no one was seriously injured. It shook us all up a bit, words are hard to describe the feeling. In fact, there was no time to do anything,” the photographer says. 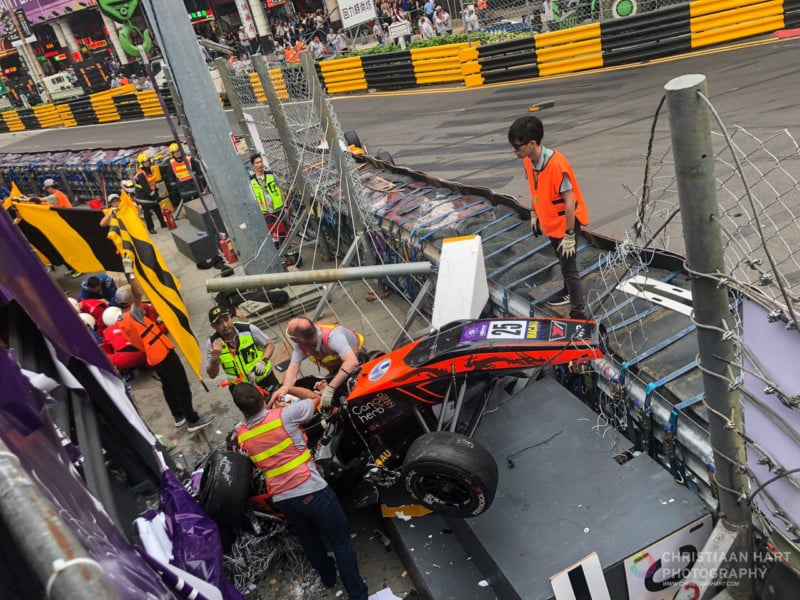 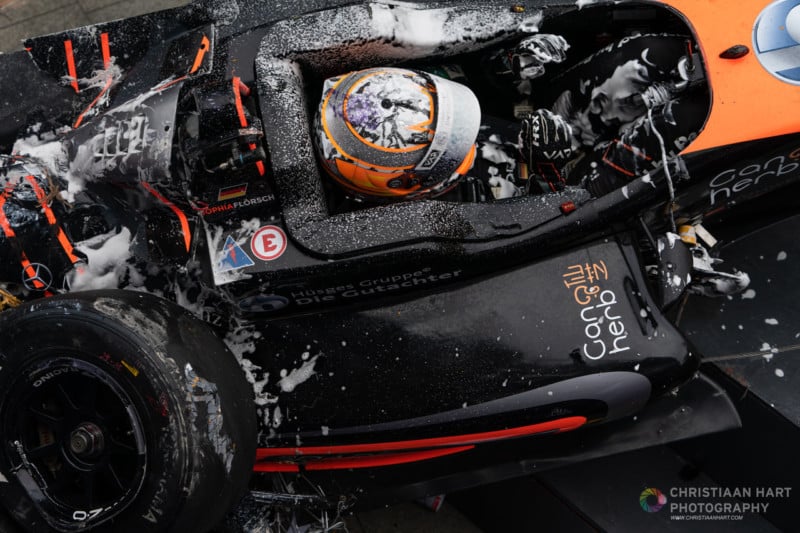 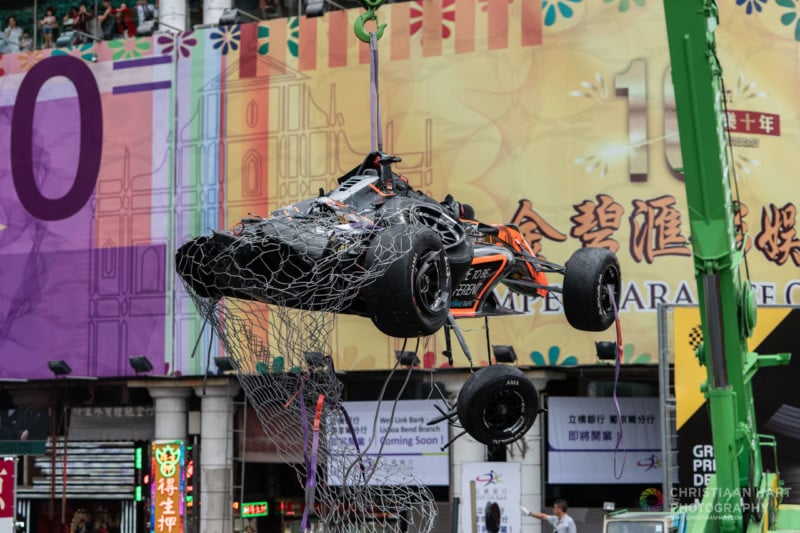 “I would think next year that area will be red-zoned,” Hart says. “After witnessing this, I would definitely think twice about shooting from that position.”

Image credits: Photographs by Christiaan Hart and used with permission

News, Spotlight
accident, caughtoncamera, crash, f3, racecar, racing, wreck
Related Articles
Discussion
Trending Articles
Blood Moon, Aurora, and Milky Way Captured in One Photo
May 19, 2022
Wedding Photographer Tells Couple to Act Drunk, Gets Amazing Portraits
May 20, 2022
The Science Behind Why Watches are Set to 10:10 in Advertising Photos
May 17, 2022
You Are Still a Photographer, Even If No One Likes Your Images
May 21, 2022
Photographer Builds Giant Camera and Darkroom Bus
10 hours ago