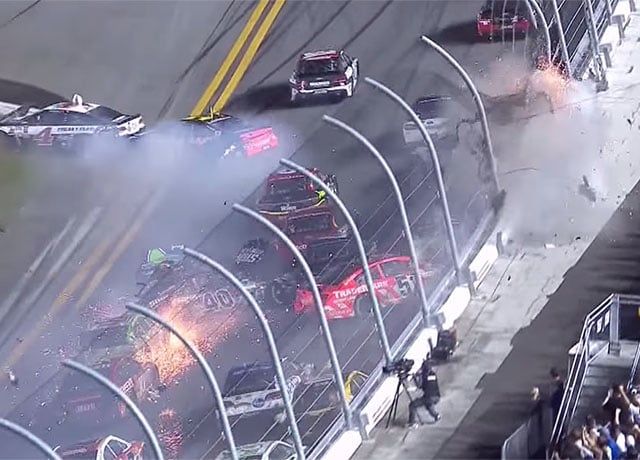 A cameraman at the Coke Zero 400 NASCAR race escaped disaster this past weekend at the Daytona International Speedway. While working a camera on a tripod on the side of the track, the man found himself just a short distance away from a car slamming into the catch fence after a big wreck.

The startled man was seen on television stumbling and falling back from his position. Here’s NASCAR’s crash replay that shows the guy from two different angles:

His brush with serious injury (or death) was also captured from a spectator’s perspective:

Photographers at major races are generally asked to sign waivers before being allowed to get up close to the track to shoot, and these videos shows why: if a violent crash happens, up against the catchfence isn’t a very safe place to be.

Shooting racecars whizzing by at 180MPH from up close is a thrilling experience, though. Back in May we shared a video showing what it feels like for photographers who take track-side positions.

Photos of an Unusual Pet Family Are a Hit Online