I’m photographer Jay P. Morgan, and in this video and article, we are going to be taking a look at four different sensor sizes and see how they compare with one another. 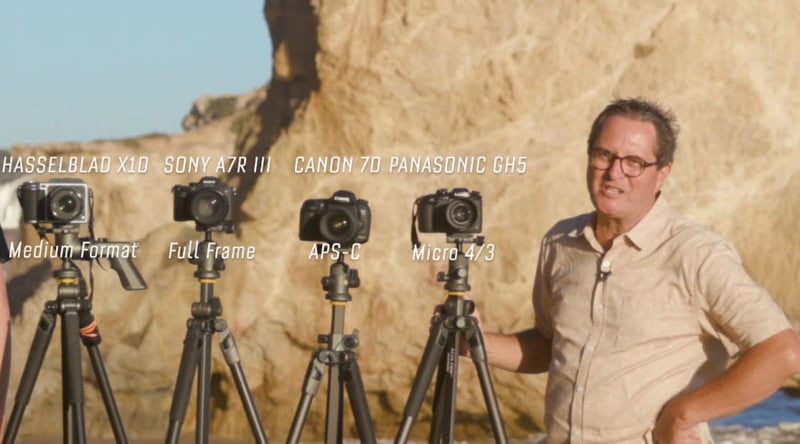 First, we have the $6,500 Hasselblad X1D, which is a medium format camera, it’s the largest digital sensor on the market right now. The Sony a7R III is a full-frame camera, the Canon 7D has a cropped APS-C sensor, and the Panasonic GH5 is Micro 4/3. We are going to take a look at how they match up to each other in regards to depth of field, image quality, and grain structure. Let’s see what we find out!

Focus and Depth of Field Test 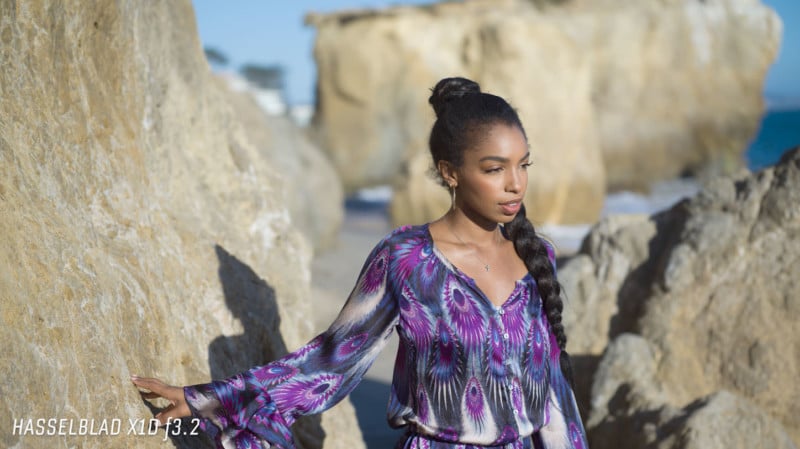 Starting with the lowest aperture is the Hasselblad with f/3.2 The background falls away super quickly, less than a f/2.8 on a full frame camera. A really nice shallow depth of field.

If you look at the GH5, the image is a little bit overexposed. But taking a look at the depth of field, the background is still incredibly sharp. 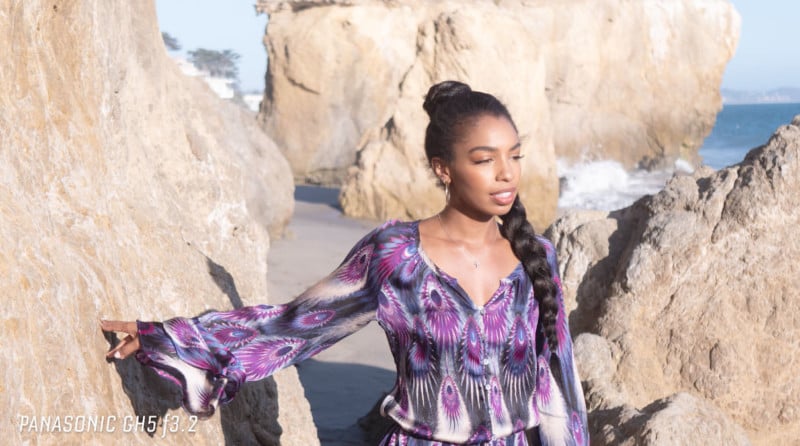 Canon 7D and the Sony

I would say that the difference between these two cameras is the least between all the cameras. The Hasselblad to the Sony still feels very dramatic, but Sony in comparison to the 7D is comparable. 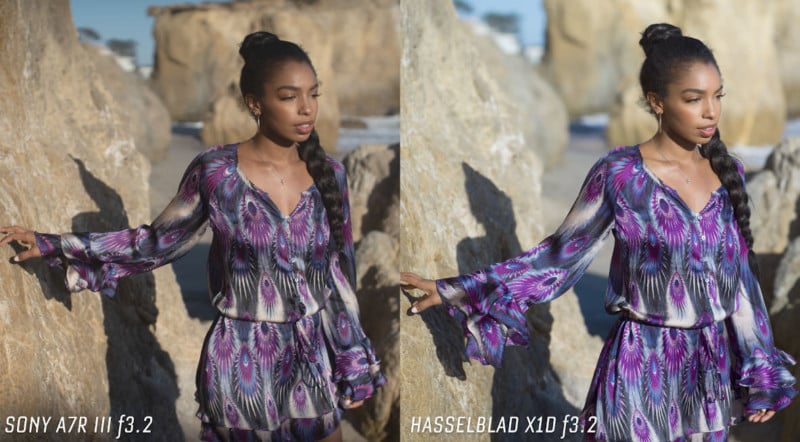 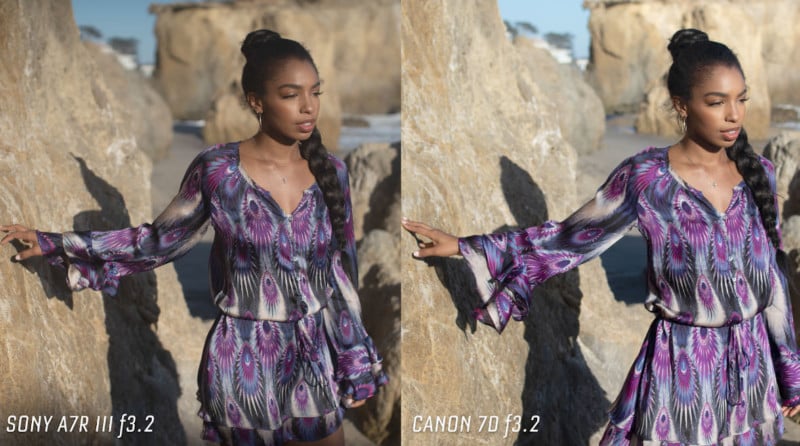 When we go to f/4.0 on all the cameras it doesn’t change that drastically. 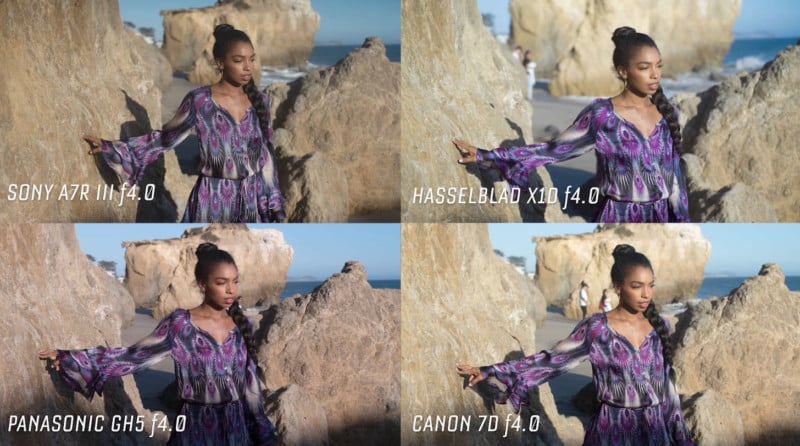 At f/5.6, which is optimal to shoot, the 7D is looking very similar to the Sony. What I like on the Hasselblad you can shoot on the optimal sharpness and level of the camera, and still get a really nice shallow depth of field. In contrast, with the Sony, you aren’t seeing as much of that clarity. 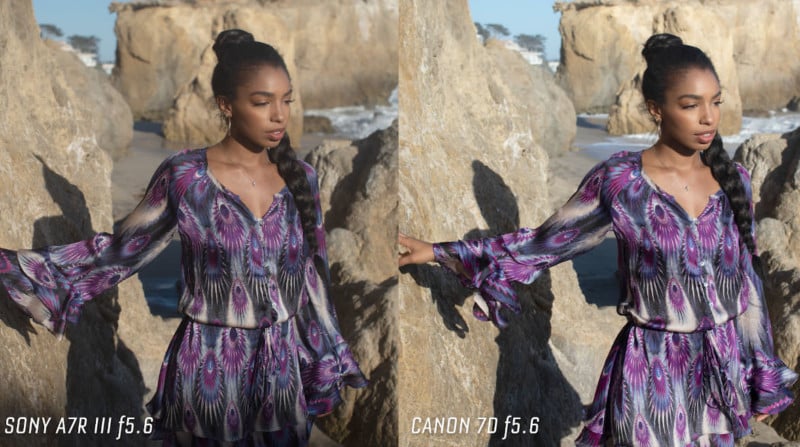 On the GH5, the background is incredibly sharp. It’s sharp all the way down the coast of California, I can almost see Chile! With the Hasselblad, we still have some depth of field. 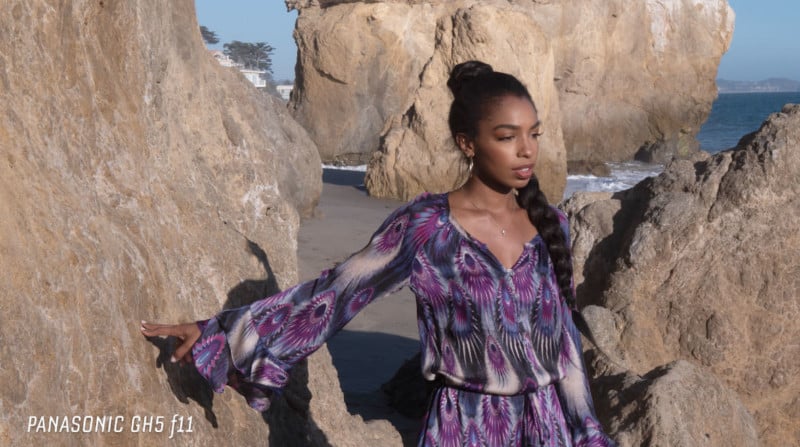 You have to go all the way to f/32 in order for the Hasselblad to finally be in focus in the background. 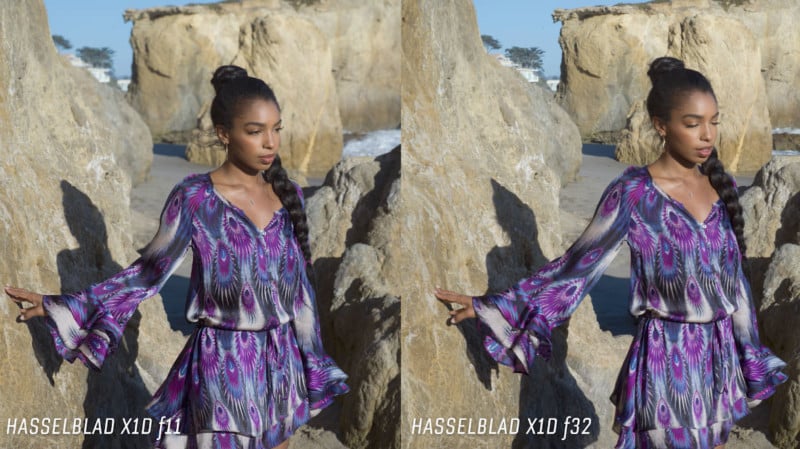 Using the photos, we created a visual measurement to compare the depth of field of all four cameras at different f-stops. 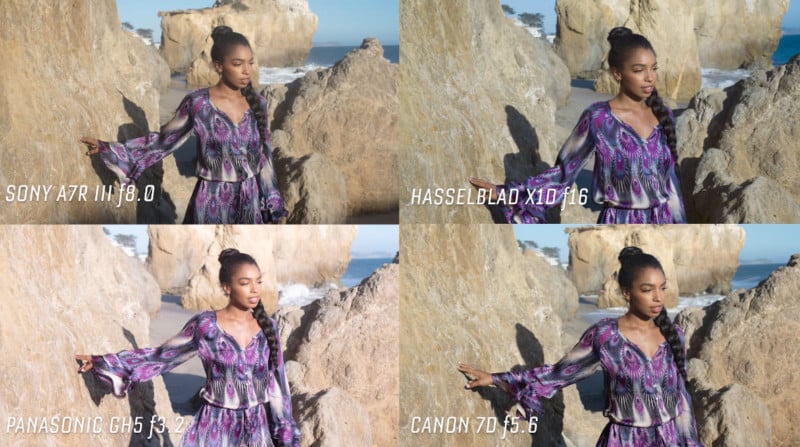 The Hasselblad isn’t as flexible as a full-frame sensor. In comparison, the Sony can achieve both shallow depth of field and a focused depth of field with lessening the quality of the image. 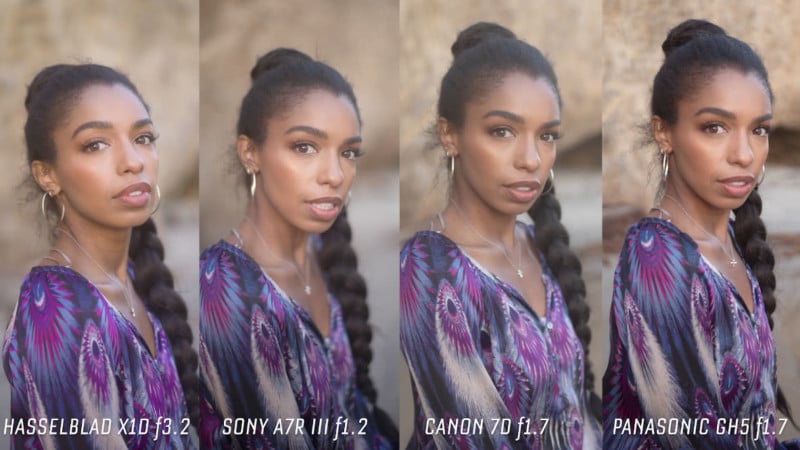 With the GH5 at f/1.7, we are achieving a shallow depth of field here, that’s a workable portrait. The Canon 7D is a lot shallower at the same f-stop. 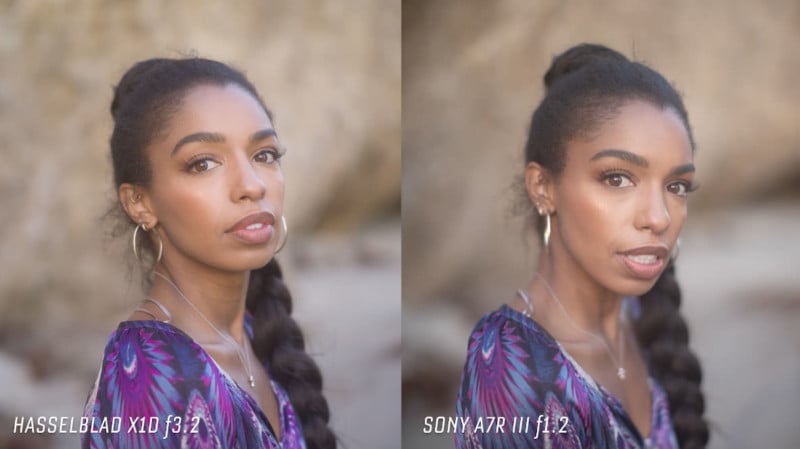 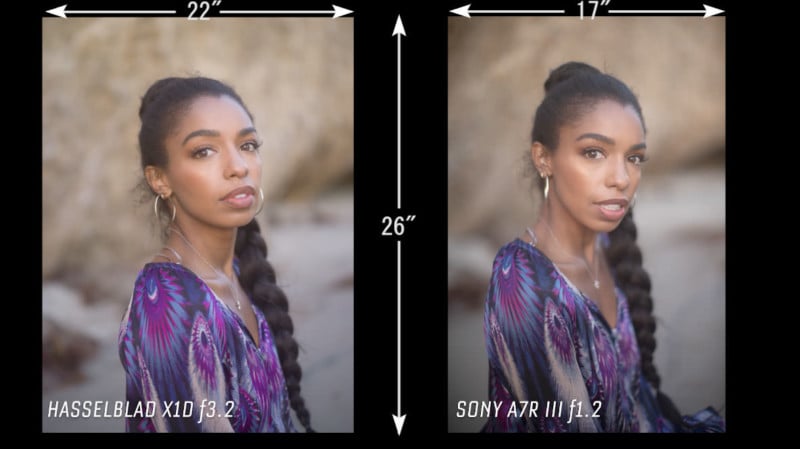 The a7R III is a 42-megapixel camera while the Hasselblad is 50-megapixel, so it edges out a bit on photo quality. When we blew it up to 300 DPI, the Hasselblad gave us 22in while Sony only gave us 17in wide. This really made me realize that the full-frame camera is the most flexible tool. You can shoot at f/22 and have everything in focus and shoot at f/1.2 and get a really nice shallow depth of field. The a7R III becomes a compromise because the megapixel is a bit lower, but it still gives you a nicer depth of field of its large sensor. It’s in between the 7D and the Hasselblad in terms of sensor sizes and quality. 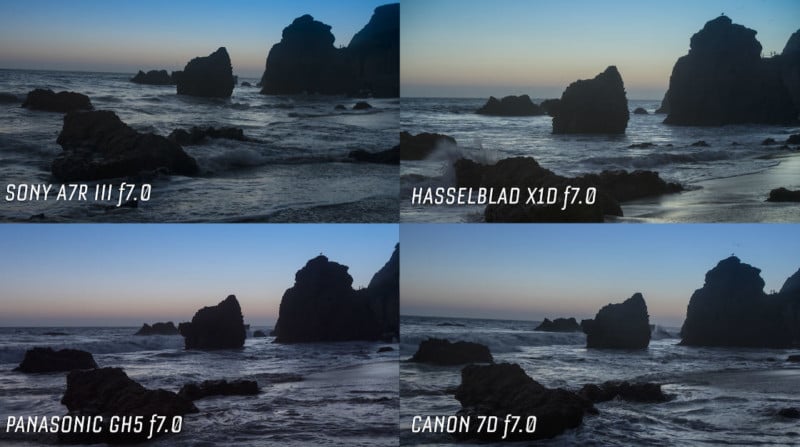 We took this shot really late in the day. There is a good amount of depth of field on all the cameras with the Hasselblad being the least shallow. Looking at all the images we have here, the small sensor on the GH5 stands out because it’s so grainy. The a7R III and Hasselblad look the same in terms of the noise structure. 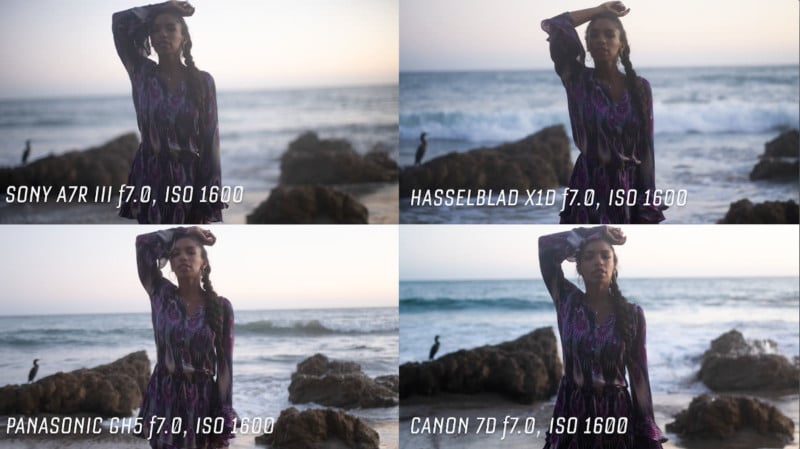 All of them are really struggling, you look at the 7D and the GH5, and they are super noisy and gritty. 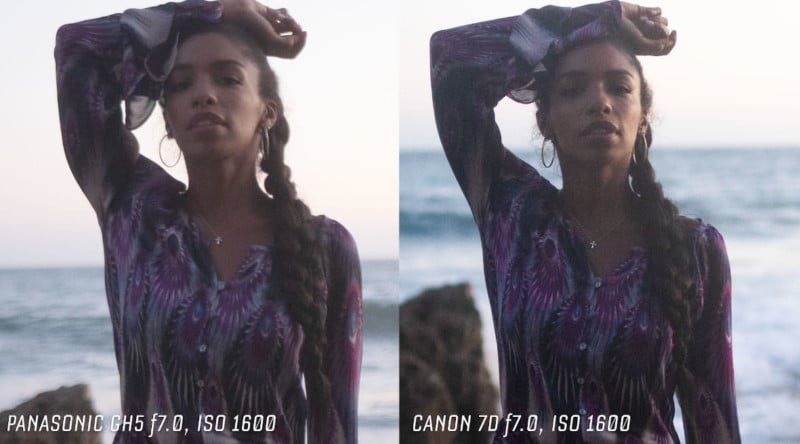 You can see the grain popping out on the 7D more than the GH5. The Hasselblad is pretty smooth, leaving the Sony behind in the dust a little in terms of image quality. 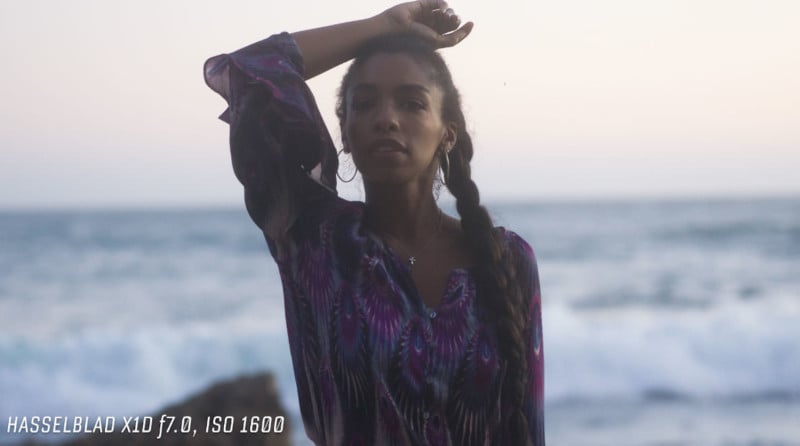 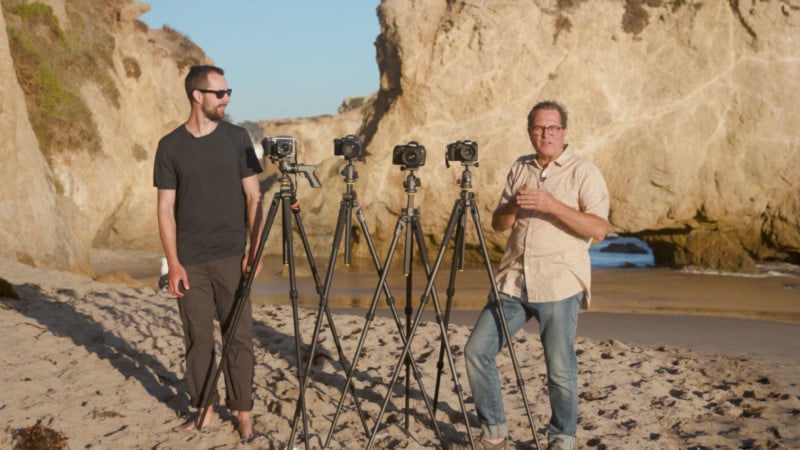 Yes, it does, if you want a high performing camera! I was kind of surprised by the results. I wouldn’t recommend a Micro 4/3 if you are looking for a high quality performing camera. Initially, I expected that the APS-C sensor would perform better, but it fell short. The full-frame sensor seems to be a sweet spot to be able to give you a really decent image size. I don’t see a huge improvement with the medium format vs. full frame. The quality isn’t good enough on the Hasselblad to make it worth spending more money on not just the camera, but also the lenses.

Credits: This test was conducted by Jay P. Morgan and Kenneth Merrill. The model was Lezl Gonzales

Yashica’s ‘Unexpected’ Y35 Camera is Worse Than Anyone Expected

Film in the Digital Age: An Interview with 4 Photographers