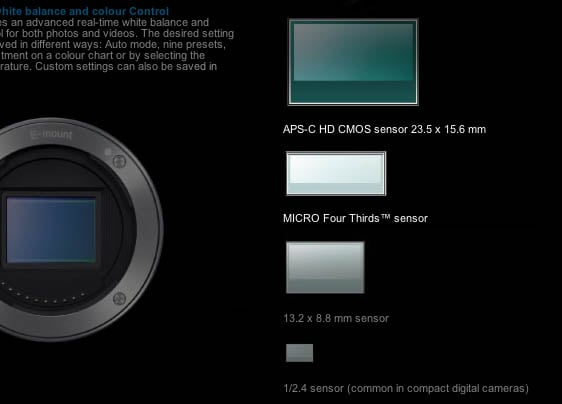 Regardless of how you feel about Hasselblad’s idea of taking a $1,100 Sony NEX-7, souping it up, and selling it for $6,500 as a Hasselblad Lunar, I think we can all agree that there needs to be honesty in marketing the camera. Well, that’s what a couple of sections over on the Lunar website seriously lack. Check out the page boasting about the camera’s APS-C HD CMOS Sensor, which contains a side-by-side comparison showing the common APS-C sensor size next to other popular sizes. Does that look like a Micro Four Thirds sensor to you?

Here’s what a side-by-side comparison of Micro Four Thirds and APS-C actually looks like:

No, Micro Four Thirds isn’t some kind of sensor that’s geared specifically toward shooting widescreen video for movie theaters. In fact, APS-C has a more stretched-out aspect ratio than MFT, so it’s strange seeing how Hasselblad decided to portray the smaller sensor (it’s as if they only had surface area to work with when creating the graphic).

But that’s not all… On the same page is an equally bogus description of APS-C sensors: 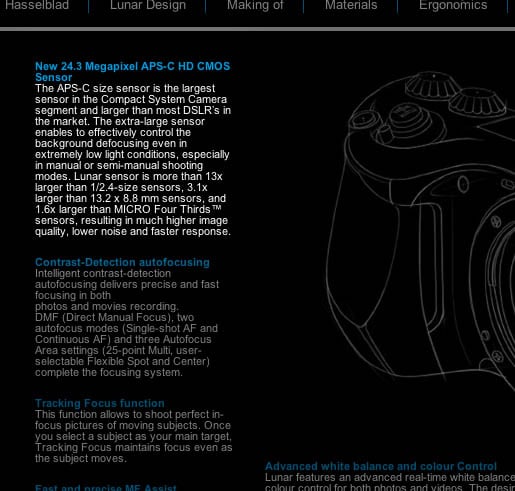 The APS-C size sensor is the largest sensor in the Compact System Camera segment and larger than most DSLR’s in the market. The extra-large sensor enables to effectively control the background defocusing even in extremely low light conditions, especially in manual or semi-manual shooting modes. Lunar sensor is more than 13x larger than 1/2.4-size sensors, 3.1x larger than 13.2 x 8.8 mm sensors, and 1.6x larger than MICRO Four Thirds™ sensors, resulting in much higher image quality, lower noise and faster response.

The truth is, the APS-C sensor isn’t the largest in mirrorless cameras. Leica’s M9 is considered to be a member of the CSC category and features a full frame sensor.

Furthermore, APS-C is certainly not “larger than most DSLR’s in the market.” Most DSLRs contain APS-C and full frame sensors, not something smaller. I wonder which “DSLRs” and what “market” the marketing people at Hasselblad were looking at.

At best, there are some ignorant copywriters over at Hassy. At worst, the company is pulling some pretty nasty tricks in order to make the Lunar seem more attractive than it is.

Thanks for sending in the tip, Ron!