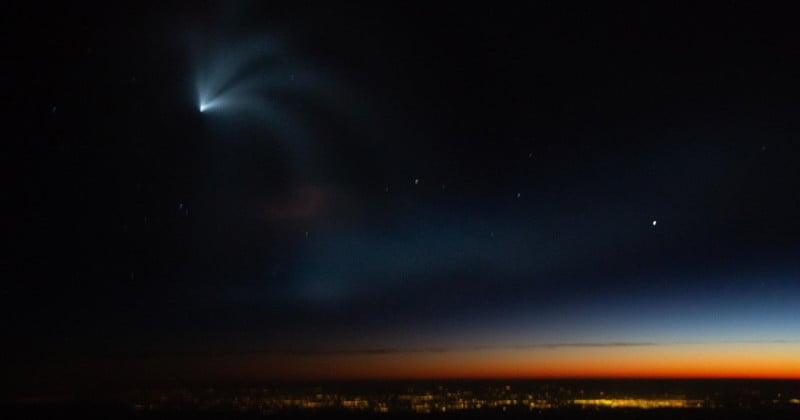 “Oakland Center are you talking to that traffic at our 9 o’clock position? We got a yellow light out there and it’s coming up pretty fast.” This unusual radio transmission to Air Traffic Control from a Southwest Airlines jet caught our attention on an otherwise routine flight between New Orleans and San Francisco.

It was the edge of night and we were cruising at 38,000 feet through a sleepy section of airspace above Nevada. The faintest glow of red dusk light remained along the western horizon but the rest of the sky had fallen into darkness.

“Better get ready to take a video,” I joked to my first officer. “We’re in the middle of UFO country, right near Area 51, maybe we’ll get…”

“Hey, I think I see it,” he cut me off while pointing out our left front window.

A small, but intense, yellow light was streaking up through the desert sky.

The streak of yellow was a good 50 miles away and it appeared to be moving parallel to us but in the opposite direction.

I instinctively reached down to grab my camera. I always keep a Canon DSLR and an assortment of lenses close at hand for moments just like this one. Every airliner has a little cubby hole next to the pilot seats where we formerly stored our chart kits filled maps and company manuals. These days we store all those documents on an iPad and the vacant chart cubby is the perfect place to stash a camera bag.

The moment I pulled out my camera the mysterious, fast-moving light disappeared.

Air Traffic control came over the radio responding to the curious Southwest pilots, “Yeah, Southwest they said there’s a Falcon 9 launching out of Vandenberg. That’s probably what you’re seeing.”

And then the yellow streak reappeared, but now it was significantly higher. It was at or above our altitude and accelerating rapidly.

I had no idea how long the rocket would stay visible and my camera was still set up for the street photography I had been doing earlier in New Orleans. The flight deck was too dark to read camera dials without wasting valuable seconds turning on the interior lights. I made a snap decision to just go for a shot, better to try and fail than miss the opportunity while messing with camera settings.

I knew I had left my camera in aperture priority mode, so I cranked hard on the thumb dial to open my lens to f/2.8 while lifting my camera to my eye. Then I set the ISO to 3200 and exposure compensation to -3 EV while composing a photo through the viewfinder. The autofocus struggled to latch onto the tiny light from the distant rocket but it eventually caught and I fired off a few photos.

Those first photos were garbage, all motion blur and camera shake. Auto modes weren’t going to work. If I was going to get a usable photo I would have to slow down and set the camera up properly. I turned on my reading light, set the camera to manual mode and dialed in my tried and tested settings for night aerial photos: ISO 3200, f2.8, and 1/20 second shutter speed.

“Oh my god dude! I think the rocket might’ve just exploded or something,” my first officer said.

I glanced out the side window to see the rocket’s exhaust illuminated like a planet-destroying comet approaching the upper reaches of the atmosphere. The rocket had come out from behind the earth’s shadow and the exhaust trail was glowing in the same way the moon glows in the night sky.

I had one last step to get my camera ready: switch to manual focus and focus to infinity.

With the camera set up, I took some shots, chimped, adjusted, and took more shots. I wanted to capture both the dusk light on the horizon and the rocket exhaust cloud. The settings pushed both my camera and my ability to shoot hand-held. My current camera is a Canon 5D Mark III. I trust the sensor up to ISO 3200, but if I go above that things start to fall apart. At first I could use ISO 3200 and 1/20th second, but as the rocket got further away I had to dial the ISO up to 6400 and dial the shutter speed back to ⅛ second. Those aren’t ideal settings for taking photos while flying at Mach 0.78.

With a few good photos in the bag I paused to make an announcement to the passengers: “Folks, if you take a look out the left side of the aircraft…”

The rocket event started at 7:25 and was over by 7:35. I’ve been flying airliners for 19 years, watching that rocket escape Earth’s atmosphere was one of the most beautiful things I’ve ever witnessed while airborne. Part of me wonders if SpaceX scheduled the launch purposely for the lighting effects presented at dusk and free publicity from putting on the largest fireworks show possible, illuminating the sky over several large cities.

If they had launched in full daylight the rocket’s trail wouldn’t have been as visible. Or, if they’d waited till later at night, the rocket wouldn’t have climbed into the sun above the dark planet, the entire launch would’ve been in darkness. This launch was timed perfectly in the early evening. The rocket’s exhaust was perfectly highlighted creating maximum visual effect against the dark sky. I’m guessing millions of people across the Western United States saw it.

About the author: David Raboin is an airline captain with 24 years flying experience. He has taken a DSLR along on every trip he’s flown since 2004. All photos taken while flying are done in accordance with federal aviation regulations. Along with aerial images David enjoys street photography, landscape photography, and documenting his growing family. David has licensed his work for publication thousands of times through iStockphoto and Getty Images. His photos have been published in magazines, on the Internet, and used in ad campaigns. You can see more of his work on Instagram.