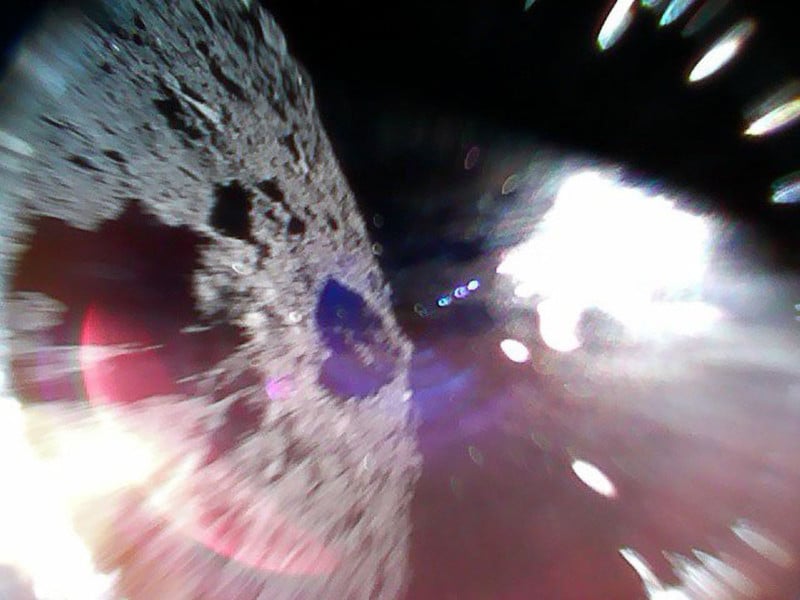 Japan just made history by landing two small rovers on the surface of an asteroid hurtling through space 174 million miles (280 million km) from Earth, and here’s the first published photo from the rovers shot from the surface of 162173 Ryugu.

The photo “was taken during a hop on the surface and you can feel this dynamic movement” in the motion blur, the Japanese space agency JAXA writes.

The asteroid measures about 0.6 miles (1km) in diameter and was discovered back in 1999. JAXA’s Hayabusa-2 spacecraft sent the two rovers to the space rock on Friday, and the rovers will be gathering photos and data as they hop across the asteroid. Due to the low gravity, the rovers spend 15 minutes in the “air” for each 15-meter (49-foot) hop.

Hayabusa-2 arrived at the asteroid in June 2018 after a 3.5-year, 1.99-billion-mile (3.2-billion-km) trip from Earth. Here’s the series of photos that were shared through the approach, dispatch, landing, and initial hops:

[MINERVA-II1] Hayabusa2 has started its descent and the images taken by the Optical Navigation Camera Wide angle (ONC-W1) for navigation are being released in real time at this gallery link: https://t.co/iafav3jguJ [Image credit: JAXA] pic.twitter.com/bpeb9MCZAy

[MINERVA-II1] The shadow of Hayabusa2 on the surface of Ryugu is gradually becoming stronger. The altitude of the spacecraft is now down to about 400m.
※The image was captured at universal time, UTC 2018-09-21 03:05 pic.twitter.com/q6rrNTz0VF

We are sorry we have kept you waiting! MINERVA-II1 consists of two rovers, 1a & 1b. Both rovers are confirmed to have landed on the surface of Ryugu. They are in good condition and have transmitted photos & data. We also confirmed they are moving on the surface. #asteroidlanding

This is a picture from MINERVA-II1. The color photo was captured by Rover-1A on September 21 around 13:08 JST, immediately after separation from the spacecraft. Hayabusa2 is top and Ryugu's surface is below. The image is blurred because the rover is spinning. #asteroidlanding pic.twitter.com/CeeI5ZjgmM

Photo taken by Rover-1B on Sept 21 at ~13:07 JST. It was captured just after separation from the spacecraft. Ryugu's surface is in the lower right. The misty top left region is due to the reflection of sunlight. 1B seems to rotate slowly after separation, minimising image blur. pic.twitter.com/P71gsC9VNI

This dynamic photo was captured by Rover-1A on September 22 at around 11:44 JST. It was taken on Ryugu's surface during a hop. The left-half is the surface of Ryugu, while the white region on the right is due to sunlight. (Hayabusa2 Project) pic.twitter.com/IQLsFd4gJu

While the European Space Agency shot the first photos ever (as well as this mindblowing view) from the surface of a comet back in 2014, Japan’s mission is the first time humans have landed rovers on the surface of an asteroid.

I love how this first image from the lander on the surface of the Ryugu asteroid is so Stanley Kubrickesque.
Well done @haya2e_jaxa team @JAXA_en! https://t.co/A1HlQu2pK8

The 2.2lb (1kg) rovers have both wide-angle and stereo cameras (four on one and three on the other) that will be used to document the surface. After a lengthy study of the asteroid, Hayabusa-2 will be packing its bags and heading back to Earth with samples in December 2019. You can follow along with the photos on the Hayabusa-2 website.

Finding Beauty in the Mundane as a Photographer