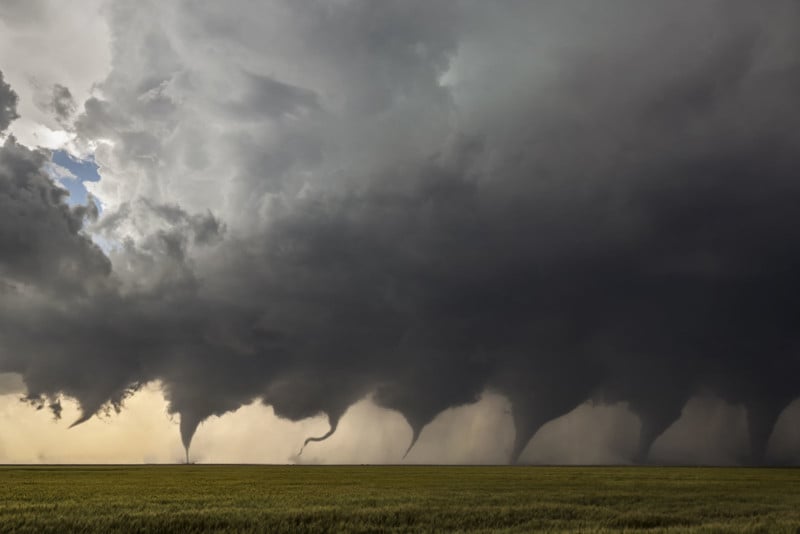 Storm chasing photographer Jason Weingart shot a series of time-lapse photos of a tornado forming in Kansas back in 2016. Afterward, he selected eight of the frames and created this composite photo titled “Evolution of a Tornado.”

The image shows the birth of “the first tornado to occur between Dodge City and Minneola, Kansas on May 24, 2016,” Weingart tells PetaPixel. The same supercell went on to produce at least 11 more tornadoes with up to three of them touching down at one time.

Weingart submitted the photo to the 2017 Wiki Science Competition and had it selected as a Jury’s Choice Winner.

Here’s the resulting timelapse video of the same tornado:

Despite clearly describing the image and how it was created, the picture later went viral online as people described it as a single photo showing multiple tornadoes side-by-side.

“I was very upfront about my techniques and what the image is and how it was manipulated, of course,” Weingart says. “I thought I was making a cool picture and donating it to the public domain by entering the contest. That was all I wanted to accomplish with it. That was really the last I thought about the image until this weekend when it went viral on Facebook on a few accounts being described as an ‘intense supercell with a mass of tornados’.

Weingart is based in Austin, Texas. You can find more of his photography on his website and Instagram.