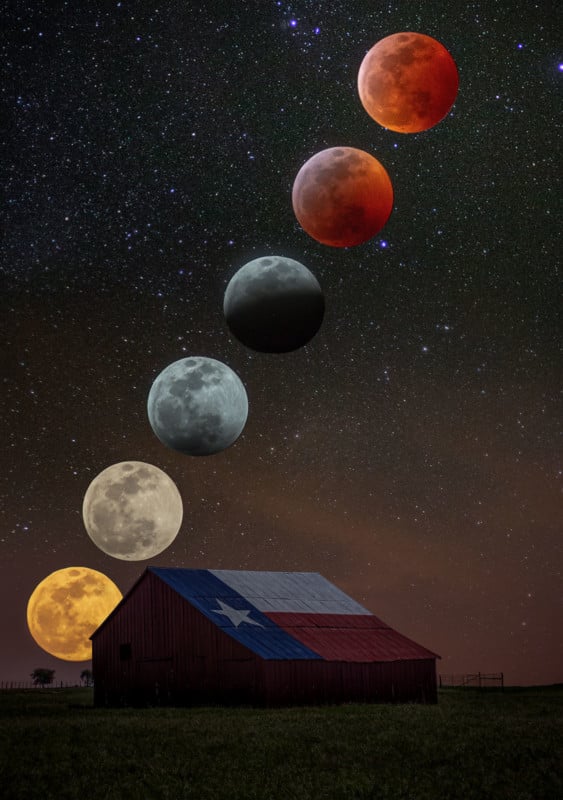 Photographer Jason Weingart shot this beautiful composite photo of the super blood wolf moon total lunar eclipse on January 20th and 21st. The image features six stages of the moon that night as it rose from the horizon and became totally eclipsed.

“I shot the barn at 105mm to give a compressed effect and eliminate some trees on both sides of it,” Weingart tells PetaPixel. “I shot the progression of the moon through the night at 250mm.

“I went back out every half hour, to give myself a good selection of moon images. I grabbed a shot of stars to the west, so I would have a good clean sky, although I probably could have used the stars around the peak eclipse. It got really dark!

“I should point out I did take some liberty with placement and size of the moon. I didn’t want to have 20 moon pictures in the same image, so I made the eclipse a bit lower in the sky than it was. I also enlarged the moon by 75%.”

With countless photographers trying to capture noteworthy views of the eclipse — the last total lunar eclipse until May 2021 — Weingart knew he needed to work and publish quickly to make a splash.

“I began working on the final product just after the moon rise,” the photographer says. “I knew that I wanted to get a good clean composite out just after the eclipse hit peak because it was a big story that day and there would be a ton of competing images.

“We hit peak in Central Texas at 11:12pm, so I was done shooting by 11:30. I had the final image up on my Facebook and Instagram by 11:50 and could tell that it was going viral, almost instantly. My phone actually died that night while it was plugged in because of the notifications continuously vibrating the phone.”

Weingart is the same photographer who struck viral gold with a composite photo of a tornado forming in Kansas back in 2016. You can find more of his work on his website, Facebook, 500px, and Instagram.

Is GoPro Failing as a Company?

The High Cost of Perfection