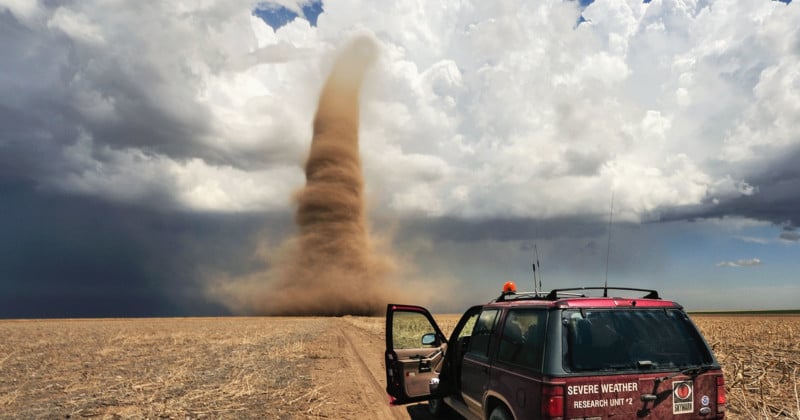 I’ve been photographing extreme weather for 25 years. After publishing tips on how to photograph lightning here back in March, I was asked to share any tips I have in capturing an award-winning tornado image. So, here I go…

Note to reader: Storm chasing and extreme weather photography, as discussed in this article, can be very dangerous. Any person should approach these activities with caution and appropriate supervision and training.

Tip 1: Study Your Subject and Risks

Adopting a ‘safety first’ policy is critical when storm chasing. To start, I recommend reading The Basics of Tornadoes on the Storm Prediction Center website.

I also recommend you hook up with a storm chaser with at least three years’ experience to head out into the field. If you don’t know any storm chasers to ride along with, consider taking a trip with a professional storm-chasing tour company. You’ll improve your chances of seeing a tornado and viewing it safely.

Tip 2: Know Your Gear Inside and Out

According to the Storm Prediction Center, the average tornado lasts less than 10 minutes. Therefore, extreme weather photographers typically have to shoot fast. To be fast and accurate you must have thorough knowledge of your gear.

Buy the best-sealed, weatherproof, dependable camera you can afford. I’ve been shooting with Nikon equipment my entire career. Over the years, I’ve snapped frames of weather with everything from a Nikon N50 to the Nikon D5. You may get one chance at one shot of a tornado, so it’s imperative you trust your camera.

I practice with my camera before heading out to intercept a storm. If you practice, you can get to the point where you can honestly shoot with your eyes closed or in complete darkness. That’s knowing your camera.

Ansel Adams strongly believed in previsualization, a concept where the photographer can see the final print in his or her mind before actually capturing the image. Once I learned the science behind tornadoes, I began previsualizing what I wanted to see out in the field.

I typically only target tornadoes that remain in rural and wide-open fields and pose, little, if any, threat to local residents.

My goal is to try to capture the most breathtaking and optically stunning moments of the storm’s evolution. I search for a tornado that yields rich, striking colors, strong contrast, graphically interesting shapes, and well-balanced light. I can’t change the direction of a storm, but I can change how I approach it.

Do I want to shoot the tornado moving over a field or over a dirt road? Do I want to shoot the image with the sun in front, beside or behind the tornado? Is the tornado high-contrast and easy to see or is it low-contrast or wrapped in rain and difficult to see? What shape will it take? How big will it get? Is there any sense of motion? Will there be color in the frame or will it be monochromatic? These are questions I ask myself as I approach a developing tornado.

Remember, the average tornado lasts less than 10 minutes. As soon as it forms, you need to spring into action. No looking for a media card, or lens cleaning cloth or tripod! I’ve witnessed storm chasers take so long in setting up a tripod that they miss the tornado. Use a lens with Vibration Reduction. When your feet hit the ground, you need to be shooting within 30 seconds. My favorite VR lenses for shooting tornadoes are the Nikon 24-70mm f/2.8E ED VR and Nikon 70-200mm f/2.8 ED VR II. Equally if I’m shooting motion, I’ll take the time to attach the camera to a tripod beforehand.

Tip 6: Include a Smaller Object to Give the Tornado a Sense of Scale

On May 8, 2008, I photographed one of the most photogenic tornadoes of my career in western Kansas. Photo assistant Robin Lorenson and I had been documenting the tornado for almost 30 minutes. Meteorologists call this type of twister a ‘landspout tornado’, a non-storm scale tornado that is typically weaker than supercell tornadoes.

At first, I only photographed the tornado and landscape. Then, to provide a sense of scale, I walked 10 feet behind our storm chase vehicle and fired off a few more frames. Having my vehicle in the image gives us the sense of the sheer size and close proximity of the tornado.

Tip 7: Keep Shooting During Twilight and After Dark

Astronomical twilight is one of my favorite times of the day to work. It occurs when the sun is six degrees below the horizon. All the red and yellow light waves are gone. The higher color temperature of the light produces a rich blue. Even though the faint ambient light of evening does not look blue to our eyes, an exposure of a few seconds or longer reveals the high Kelvin temperature.

I also like the challenge of shooting tornadoes after it’s completely dark, but only if the storm is over a rural, wide-open landscape. When a twister occurs after dark, it’s nearly impossible to see. I have to hope that there are enough lightning flashes to illuminate the shape and size of the tornado.

On May 25, 2012, storm chasing partner Jenna Blum and I witnessed multiple tornadoes near La Crosse, Kansas. It was a spectacular phenomenon to see. But we could only see and photograph the tornadoes because of the light created by frequent cloud-to-cloud lightning bolts.

Tornadoes are actually quite rare. I’ve heard some folks say that to see a tornado you need to go on at least seven chases. I’ve been much luckier, seeing a tornado about every four chases.

So what do you do when a tornado doesn’t develop? Keep shooting! Stormy weather frequently produces dramatic lighting, moody colors and plenty of landscape photo-ops. You will also be practicing for when you do finally see a tornado.

I hope one or more of these tips are helpful. Good luck and be safe!

About the author: Jim Reed is a National Geographic photographer based in the United States who specializes in extreme weather. His tornado images have received many awards including Communication Arts, PDN Photo Annual, American Photography, and Pictures of the Year International. You can find more of his work on his website, Twitter, Facebook, and Instagram.