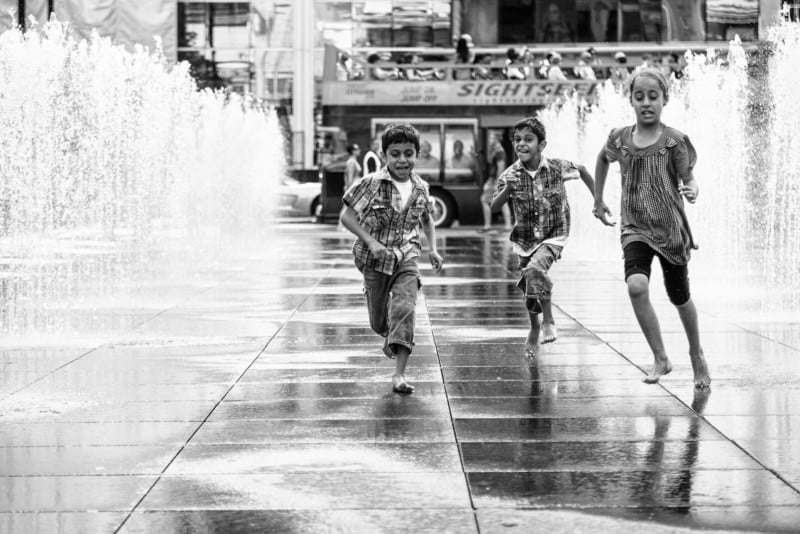 Imagine, you’re partaking in Pedestrian Sunday at Kensington Market on a sunny summer afternoon in Toronto, Canada, walking around with your Fuji X100F in hand looking for that Cartier-Bresson “decisive moment.” Suddenly you see a child leaning against a dilapidated, graffiti-splashed wall the likes of which would make Banksy nod in approval.

The child has his mug buried into an ice cream cone, working it over like a worldwide ban on ice cream is but hours away. Maybe he has a red, child-sized “Make America Great Again” cap on, along with a pair of oversized “Blues Brothers” sunglasses and a face full of attitude.

Now there’s an image just crying to be captured. Amazing!

But where are the kid’s parents? Can’t be snapping a shot of their child without permission, right? I’m sure your “decisive moment” will hold a minute or two while you chat up the parents, yes?

Here’s a newsflash for you, it won’t. You’ll be lucky if you can get your camera to your eye before the kid turns and, frustratingly, makes waste of your perfect shot. We’ve all been there. 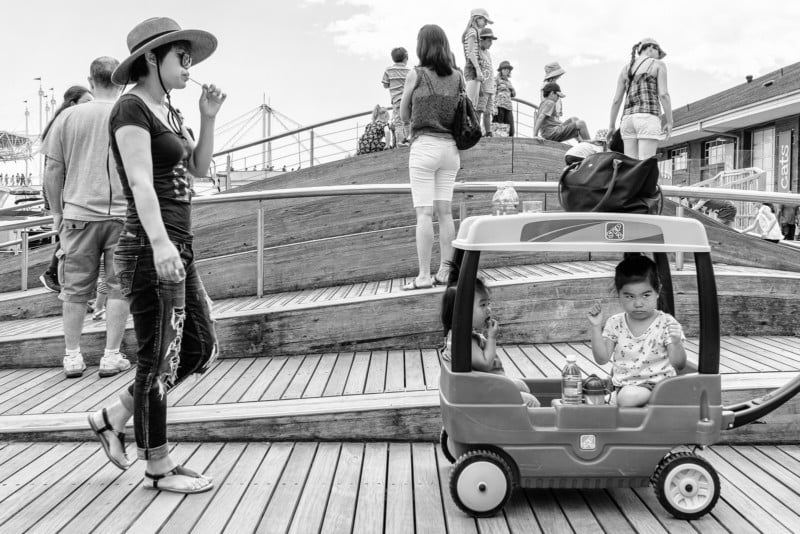 There’s a reason Cartier-Bresson didn’t call it the “decisive minute or two,” and if you take the time to seek out permission you’ll quickly find out why.

Plus, here in Ontario, Canada the law is on your side when it comes to photographing people in public, and that includes children and pets. Let me repeat that for clarity: you have every right to photograph people and children in public, without permission. Period. That clears up that debate nicely, doesn’t it?

If only it was that easy. 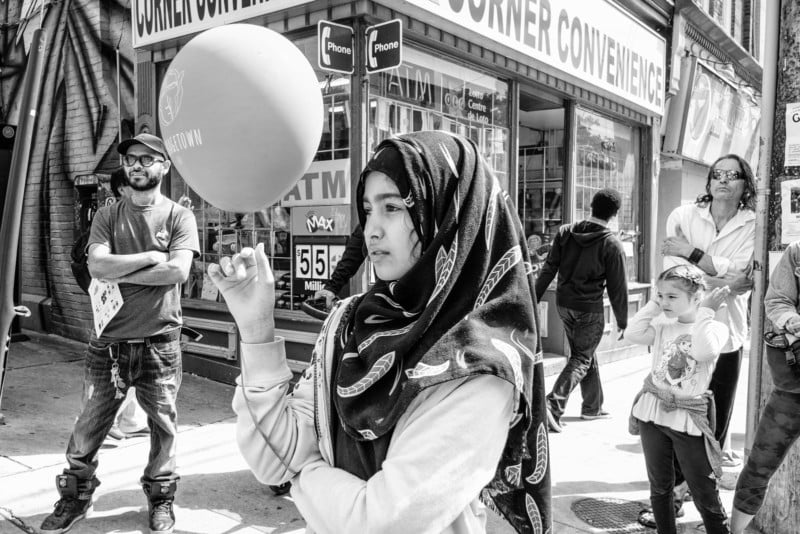 Just because the law is on your side doesn’t necessarily make it morally right. While an experienced street photographer might see no harm in photographing kids, the average neophyte might find it wildly offensive and wrong, especially if said neophyte happens to be a proud parent of a young tyke or two. Parents are, after all, a protective lot. Who can blame them? 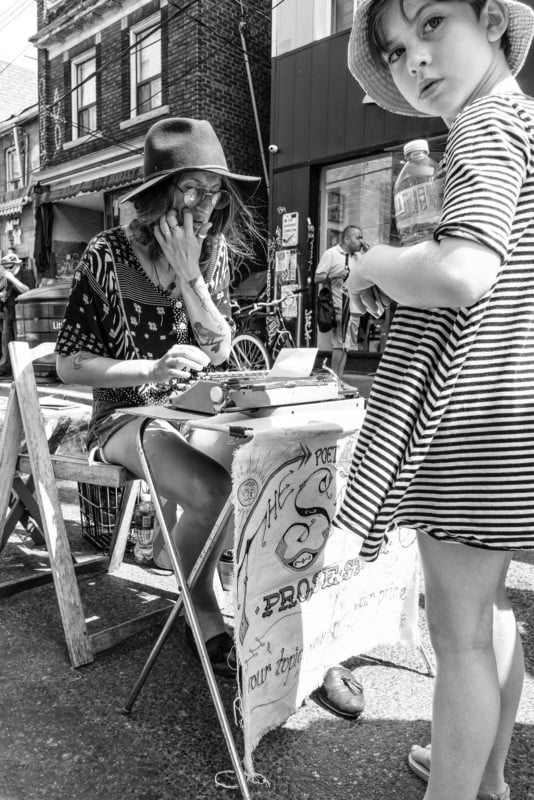 Times have changed and the days when master street photographers like Helen Levitt, William Klein, and Vivian Maier wandered the mean streets of New York and Chicago capturing their “decisive moments” with carefree abandon are long gone. We live in an era where social media has become ubiquitous, after all. When a person notices you with your camera it’s not unreasonable for them to wonder if their image will end up on the Internet for all the world to see, whether they like it or not. They have every right to be unhappy about it, irrespective of whose side the law is on. This especially holds true if they see you surreptitiously snapping a shot of their child. I’m sure I’d feel the same way if I had children.

If it sounds like there are no easy answers, that’s because there aren’t. 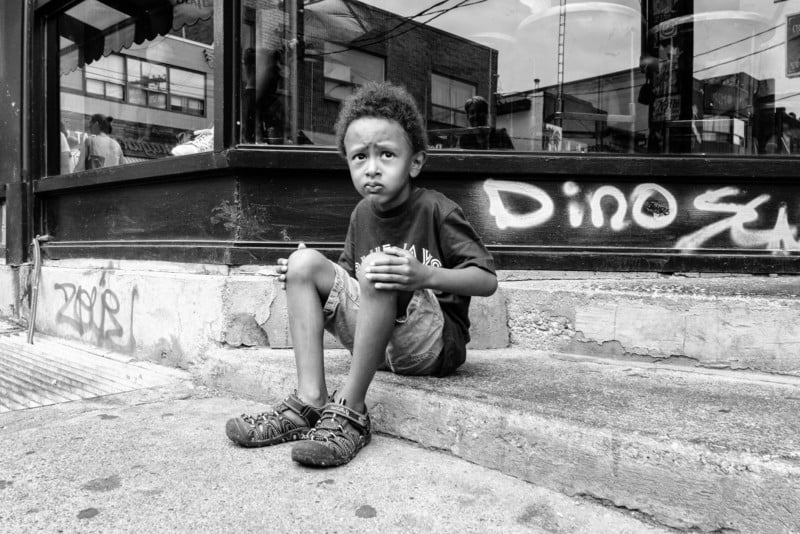 Every situation involving you, your camera and someone else’s child should be approached thoughtfully. Sure, no street photographer worth his or her salt wants to miss that decisive moment, but I suspect none of us wants to end up in some argument (or worse) with an angry parent. It’s just not worth it.

So if you want to include candid photos of kids in your portfolio, make sure the photo is indeed worth the risk. Simply, the moment you are trying to capture better be a pretty damn special one; a decisive moment. Anything less isn’t worth the effort. 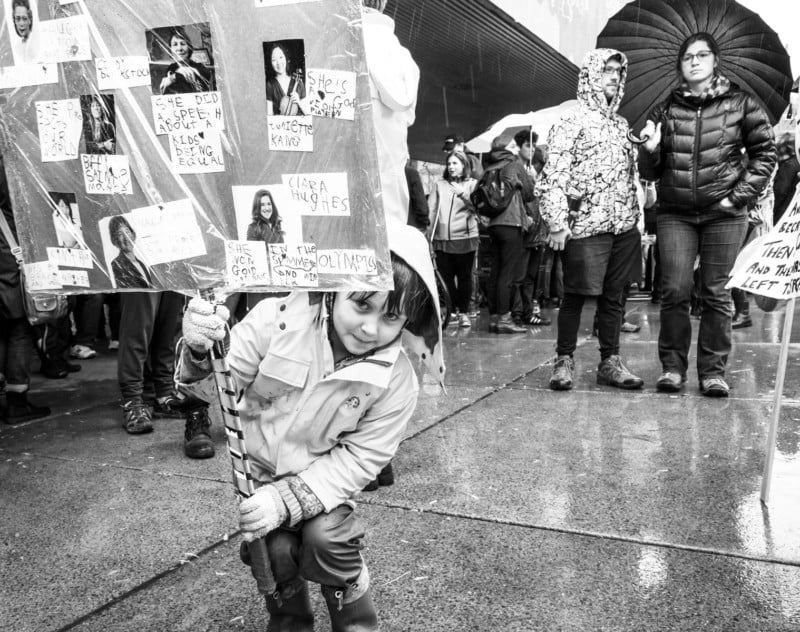 If you are caught in the act, the worst thing you can do is deny it or be uncooperative with the parents. Offer to show them the photo. If they like it, offer to email them a copy. Explain exactly why you took the photo (what caught your eye) and what you intend to do with it. If they are still unhappy, offer to delete it. Be friendly. Apologize, if need be. Don’t antagonize them needlessly. 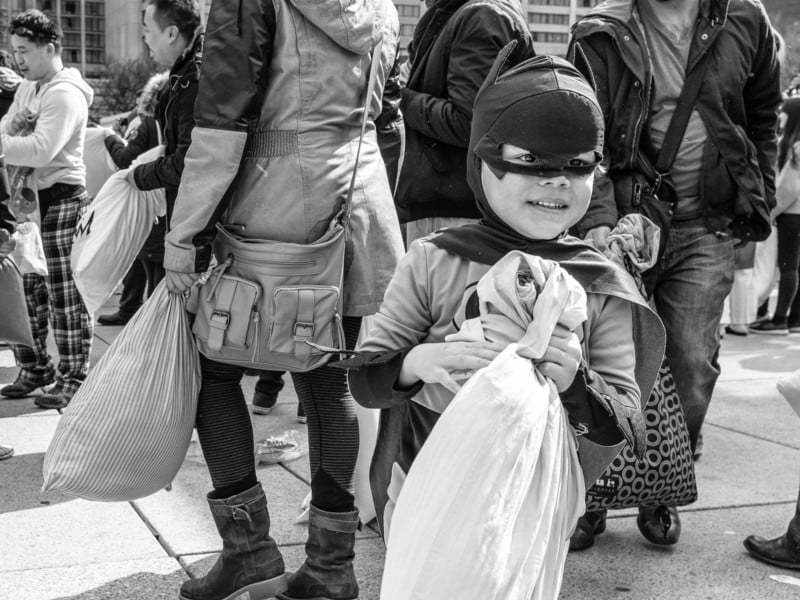 What you don’t want to do is begin shooting off your mouth about how the law is on your side and how you have every right to photograph whatever you please. I guarantee you the parents aren’t going to give a rat’s rear end about the laws when it comes to a stranger photographing their child.

And to them, that’s all you are. Sure, you might think you’re the next Cartier-Bresson, street photographer extraordinaire, but to them, you’re nothing but some creepy stranger pointing a camera at their kid without permission. Always keep that in mind. 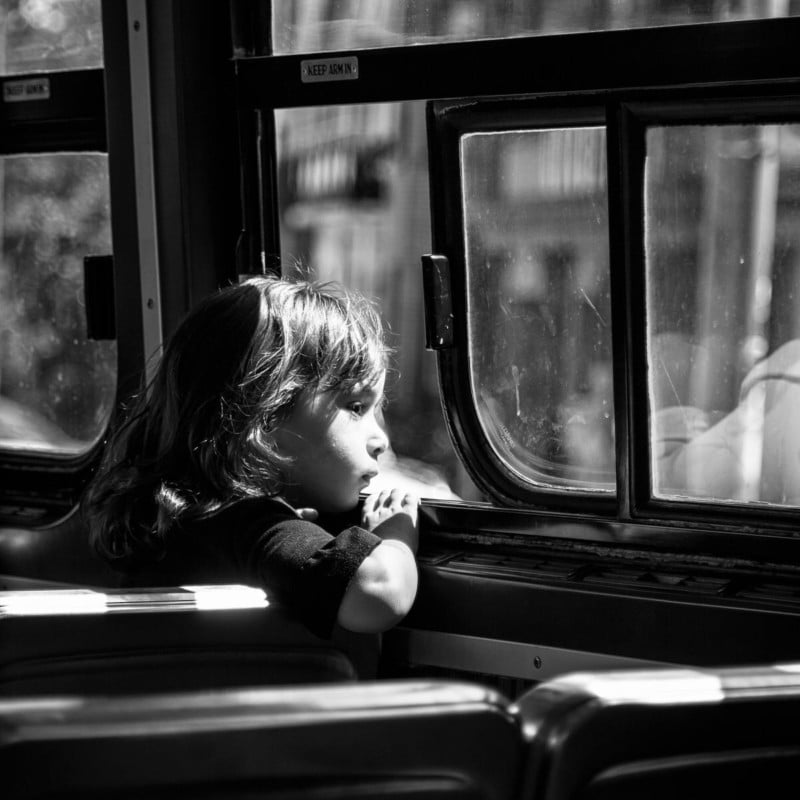 Now, while the law here in Ontario, Canada, permits the photography of people in public places sans permission, it might not be the same in your province, state or country. In Paris, France, for instance, an ambiguously written law protects the privacy of people out in public. Strictly speaking, one would have to ask permission to photograph strangers in candid situations on the cobblestoned avenues of this timeless European metropolis. By law, Parisians have an exclusive right to their image and its use. 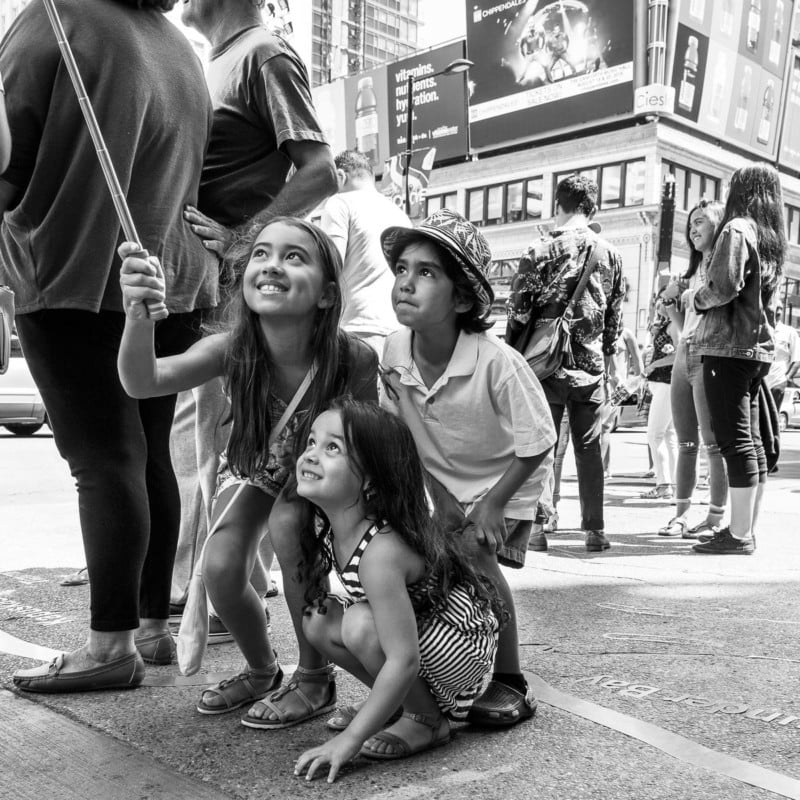 So whether you’re just starting out in street photography or a seasoned street shooter, it’s always a good idea to know the laws around photography in public places. 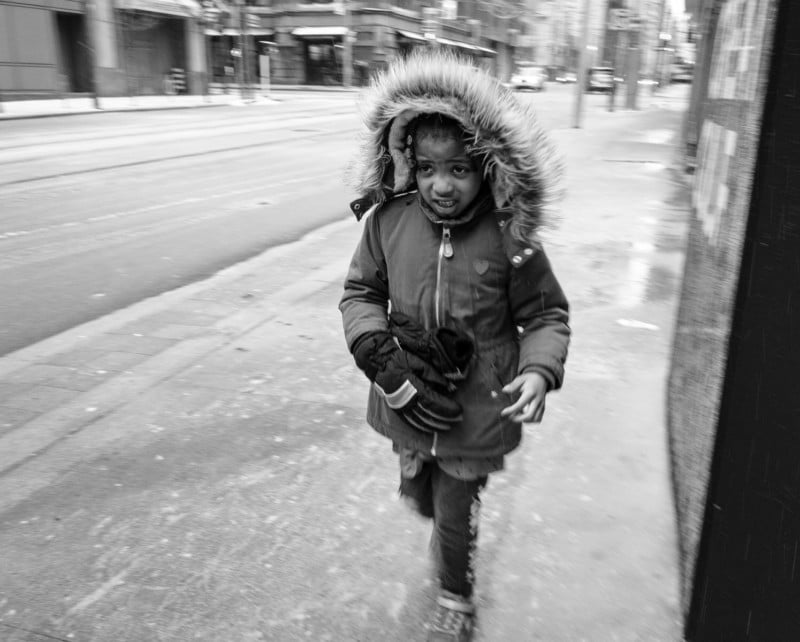 It’s also just as important to engage in the application of common sense when you’re out running around sticking your camera into the faces of strangers. After all, behaving in a disrespectful and rude manner will only ruin it for the rest of us and no one wants that.

About the author: Dave Bottoms has spent the past decade exploring the streets of Toronto, Canada, where he calls home. The opinions expressed in this article are solely those of the author. Around Bottoms’ neck hangs a Fujifilm X Pro 2 sporting an 18/2 prime most of the time. Dave is also an Admin for the Toronto Street Photography and Canadian Street Photographers groups on Facebook. When not taking pictures he is a freelance writer/editor for hire and is currently working on a street/documentary photography book of his work. You can find more of his work on his Instagram and blog.

This is How Nikon Tests the Durability of the D850