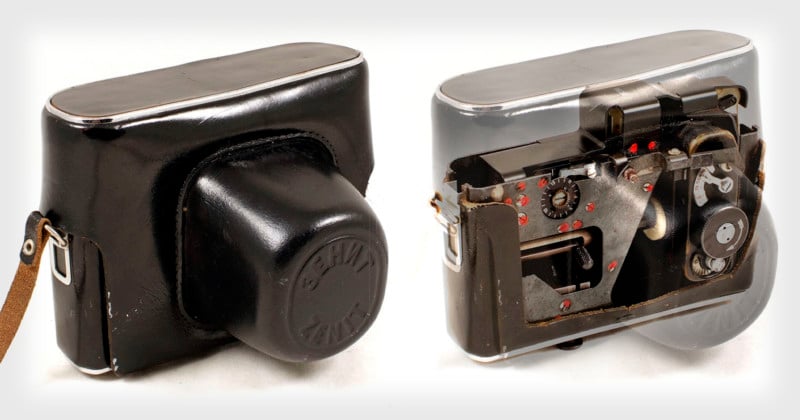 
The camera went up for auction in early July at Aston’s Auctioneers in the UK, where it ended up selling for £3,300 after an initial estimated value of just £150 to £200.

The spy camera is designed to look like a common Zenit E 35mm SLR tucked away in its leather case. It allowed the photographer to look like the camera is not in use while he or she is actually stealthily snapping photos of a subject or scene.

Opening the case reveals that it actually contains a tiny 3x2x1-inch F-21 AJAX-12 camera with its 28mm f/2.8 lens pointed out the side of the case at an opening right under where the strap is mounted to the case. The camera uses 21mm film and has a clockwork drive for capturing multiple shots.

Aston’s photographic consultant Tim Goldsmith tells Bloomberg he was originally unable to figure out how the camera worked and had to consult with the Moscow-based KMZ (Krasnogorski Mekhanicheskii Zavod, the company behind the Zenit) to learn its workings.

When a small shutter button on the bottom of the case is pressed, an internal mechanism raises a secret flap covering the opening while triggering an exposure before immediately closing the flap again. By carrying the camera case over the right shoulder, the photographer can keep the actual lens of the spy camera pointed forward and ready to capture secret photos. To onlookers, it would look like the person actually doesn’t have any interest in pulling out the Zenit E camera and taking pictures.

And there you have it: a Soviet camera spy camera.

(via Aston’s via Engadget)