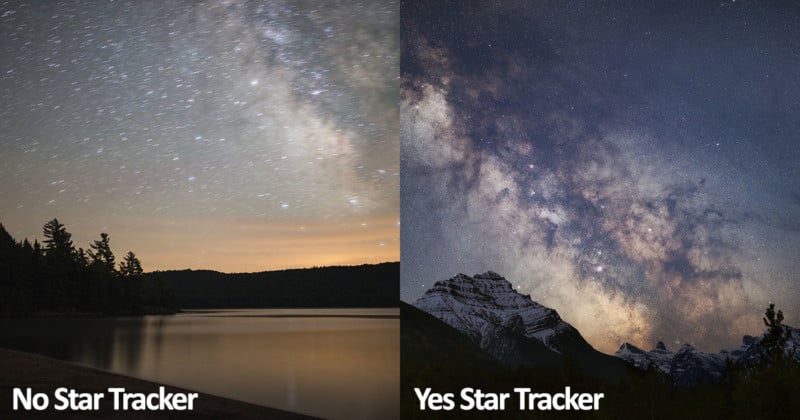 Astrophotography is generally a race against time to capture as much subtle starlight we can before the stars create trails in our images. The movement of the Earth puts a natural limit on how much sharp, subtle detail we can reveal. We have to use super fast, wide angle lenses and high ISO values to see all the awesome detail. Fortunately, a tool exists to circumvent this barrier to reveal more of the hidden magic we have in our night sky.


This essential piece of gear astrophotographers use is called an equatorial mount, or perhaps more commonly known, a star tracker. These devices were invented to allow telescopes to automatically track objects in the night sky without having to manually move the telescope to keep the objects in the eyepiece.

How they work is by rotating at the same speed as the Earth, just in the opposite direction. For star trackers to work as intended, they do need to be aligned with the Earth’s axis. This is commonly referred to as polar alignment. While this does sound complicated, a smartphone app called PS Align Pro makes the process super simple.

Typically these trackers are large and heavy so they can carry telescopes and all the other gear needed for observing and imaging the night sky. Over the past few years, companies like SkyWatcher, Vixen, and iOptron have made smaller more compact versions of these trackers so photographers could capture the night sky with camera gear alone. They’re small enough for landscape and adventure photographers to pack in their bags and take them places to shoot spectacular views of the night sky in locations that would be inaccessible with large, heavy telescope gear.

These star trackers can be used to capture deep space objects like Pleiades and Andromeda using standard super-telephoto lenses like the 100-400mm.

Additionally, you can use trackers to capture landscape photos at night. However, these types of shots require some advanced post-processing where you stitch the tracked sky photo with the untracked foreground shot. When the horizon is simple and defined the process is somewhat straightforward, but it can be quite complex when you have an intricate foreground with trees or other super fine details.

In this 16-minute video, I talk about my Star Adventurer star tracker from SkyWatcher and share how to get set up to take long exposure photos of the night sky that go beyond the limitations of camera gear alone:

Star trackers allow you to use longer focal lengths, smaller apertures and lower ISOs resulting in dramatic images that are super sharp and have higher dynamic range. While they do come with some technical challenges, if you can get over these barriers, the images you can capture are simply incredible.

About the author: Matt Quinn is a dark sky and nature photographer based in the Waterloo Region of Canada. The opinions expressed in this article are solely those of the author. You can find more of his work on his website, Facebook, Twitter, and Instagram.