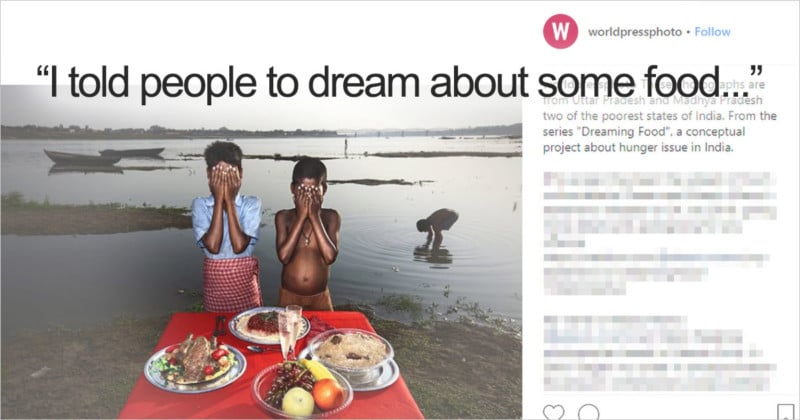 World Press Photo is at the receiving end of sharp criticism today for a series of photos on its Instagram account showing poverty-stricken Indians standing in front of tables laden with feasts.

The set of photos were posted on Sunday (and are still online) as part of an “Instagram takeover” of the World Press Photo account by Italian photographer Alessio Mamo.

These photographs are from Uttar Pradesh and Madhya Pradesh two of the poorest states of India. From the series "Dreaming Food", a conceptual project about hunger issue in India. ⠀⠀⠀⠀⠀⠀⠀⠀⠀ [This project has been the subject of much online debate. Please read Alessio Mamo’s statement, released on 24 July 2018, giving more details and apologising for any offence: https://medium.com/@alessio.mamo/my-statement-on-dreaming-food-7169257d2c5c] ⠀⠀⠀⠀⠀⠀⠀⠀⠀ My name is Alessio Mamo (@alessio_mamo) an Italian freelance photographer based in Catania, Sicily. In 2008 I began my career in photojournalism focusing on contemporary social, political and economic issues. I extensively cover issues related to refugee displacement and migration starting in Sicily, and extending most recently to the Middle East. I was awarded 2nd prize in the People Singles category of #WPPh2018 and this week I’m taking over World Press Photo's Instagram account. ⠀⠀⠀⠀⠀⠀⠀⠀⠀ Despite economic growth, a majority of the Indian population still lives in extreme poverty and disease. Behind India’s new-found economic strength are 300 million poor people who live on less than $1 per day. Government figures may indicate a reduction in poverty. But the truth is, with increasing global food prices, poverty is spreading everywhere like a swarm of locusts. These pictures are taken in rural areas where conditions are worse than in the cities and where close to 70% of India’s population reside today. Statistics show that 2.1 million children under 5 years old die of malnutrition annually. The idea of this project was born after reading the statistics of how much food is thrown away in the West, especially during Christmas time. I brought with me a table and some fake food, and I told people to dream about some food that they would like to find on their table. ⠀⠀⠀⠀⠀⠀⠀⠀⠀ #WPPh2018#asia #dreamingfood #india

Mamo had visited impoverished villages in India (Madhya Pradesh and Uttar Pradesh) and had villagers stand with their hands covering their faces in front of food-filled tables. The project is titled, “Dreaming Food.”

The photos instantly caused a firestorm of controversy to erupt as prominent members of the photojournalism community public spoke out against World Press Photo, Mamo, and the project. The series is being described as “tasteless,” “cruel,” “exploitative,” and “unethical.”

This photographer brought his own fake food to put in front of these starving children in India. He asked them to dream about what kind of food they wanted to put on the table. This is an example of #journalism with no moral compass. @WorldPressPhoto why are you supporting this? pic.twitter.com/4hmDzSJO45

Wow, this is tasteless and crass. From photographer @alessiomamo: "I brought with me a table and some fake food, and I told people to dream about some food that they would like to find on their table.” https://t.co/kXHa5Tv9rv pic.twitter.com/eeZXUlNMak

@WorldPressPhoto before you hand off you IG feed to former award winners – take a look at their work and screen for exploitation and cruelty.

“I brought with me a table and some fake food, and I told people to dream about some food that they would like to find on their table.” pic.twitter.com/eOfUZY82LJ

How *not* to photograph people who have less money than you, on full display at @WorldPressPhoto’s Instagram today. World Press Photo is one of the world’s most well-known photo organizations, but economically disadvantaged humans are not props. #povertyporn #telltheirstories pic.twitter.com/MXtMVcabie

'I bought with me a table and some fake food and I told people to dream about what food they would like to find on the table.'

Even by @WorldPressPhoto exploitative standards. Even with their lack of editorial integrity this is really something else.https://t.co/Z47d40VNGD pic.twitter.com/ZghhM8UTbo

Oh boy. This series, where the photographer puts fake food in front of food insecure people and tells them to "dream" of a full meal, is the worst kind of exploitation in the pursuit of likes. Promoted by @WorldPressPhoto no less.

Be better than this guys. pic.twitter.com/8jl0hGuTcW

World Press Photo responded the next day by releasing a “Statement on the debate surrounding photographs in Alessio Mamo’s Instagram takeover.” The prestigious photojournalism organization explained that it had given Mamo the chance to share photos on its Instagram account and that Mamo was provided guidelines and asked to be transparent.

“The photographers are responsible for selecting their work to show and writing their captions. They can present a portfolio of past work or a current project,” World Press Photo writes. “The World Press Photo Foundation is a platform that connects members of our community (contest winning photographers, masterclass participants, etc.) with the general audience. Being a platform we do not limit photographer’s choices beyond the guidelines provided, and we ask the photographers to respond directly to the audience when questions arise.

“We keep our guidelines for Instagram takeovers under constant review to learn from the debates about pictures and projects the photographers share.”

“The pictures, in my opinion, are exploitative and in no way even resembles photojournalism,” Colton tells PetaPixel. “They are ‘created’ images set up by the photographer. You don’t ‘create’ images and call yourself a photojournalist. (Giovanni Troilo, sex in a car in Charleroi, World Press Photo rescinds his award. Don’t they ever learn?)

“Regardless of what you think of the images, the statement that was released by WPP is bulls**t…to be blunt.”

“Deflecting the ethical questions that have been raised and placing the responsibility back on the photographer is outrageous,” Colton continues. “It’s the World Press Photo Instagram page… take some ownership for God’s sake! It would be like TIME or Newsweek blaming a photographer for what they publish.”

Mamo himself released a statement regarding the controversy today.

“Dreaming Food” is a project I developed independently in 2011. It was one of my first photographic projects of my career. At that time I was obsessed by the food thrown away especially in Christmas time. So I thought to develop a project about this issue but in a different way. The idea was to create a contrast between a typical Western table with luxurious food in a poor context that could emphasize this contrast. […]

Anytime we went into villages we used to spend time meeting people, speaking with them and eating together. After I explained the idea of the project and found the volunteers we prepared our set. Most of the people enjoyed spontaneously to be part of this and photographed behind the table. The people I photographed were living in a village and they were not suffering from malnutrition anymore, they were not hungry or sick, and they freely participated in the project. […]

The only goal of the concept was to let western people think, in a provocative way, about the waste of food. Maybe it did not work at all, maybe I did it in the wrong way, but I worked honestly and respectfully with all the people involved. I only had the intention to let people think about this issue.

“I’m a human being and I can make mistakes,” Mamo concludes. “I want to offer my deepest apologies to anyone who felt offended and hurt by this photos, and to the people I photographed. It was not my intention at all to discredit them.”