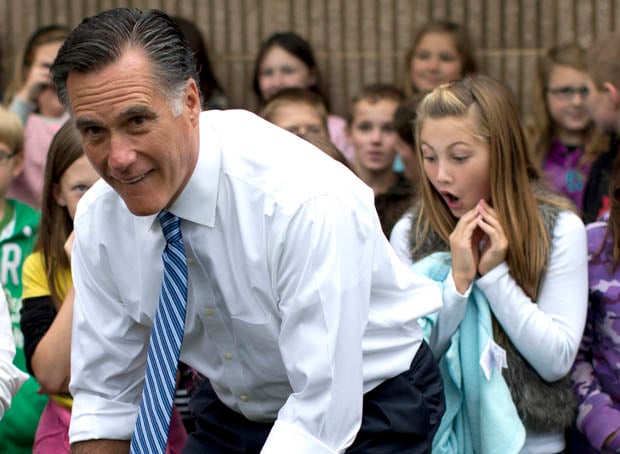 The Associated Press caused a stir this week after publishing the above photograph of presidential hopeful Mitt Romney. Shot at Fairfield Elementary School in Virginia, the photo had the caption,

The caption was innocent enough, but the fact that the photo looked as though a girl behind Romney was gaping at his rear end instantly drew criticism from across the web, with commentators calling it “unflattering” and “inexcusable“.

An apology was swiftly issued by the AP yesterday, and the organization updated the caption to explain the look on the girl’s face:

Republican presidential candidate, former Massachusetts Gov. Mitt Romney poses for photographs with students of Fairfield Elementary School, Monday, Oct. 8, 2012, in Fairfield, Va. A student, right, reacts as she realizes Romney will crouch down directly in front of her and her classmates for the group photo.

The original caption on the photo of Gov. Romney taken Monday at a Virginia school was literally correct — it said the governor was posing for photos with schoolchildren. But it was too generic and missed the boat by not explaining exactly what was happening. The student with the surprised expression had just realized that the governor was going to crouch down in front of her for the group photo.

We amended the caption on Tuesday with that explanation, but by then many people had seen the photo and were confused by or angry about it. Those generic captions help us process a large number of photos on a busy campaign day, but some photos demand more explanation and we fell short of our own standards by not providing it in this case.

As you might expect, parodies of the photograph have already begun popping up, and it’s likely only a matter of time before it turns into a full-blown Internet meme.

Are These Photographers Geniuses?