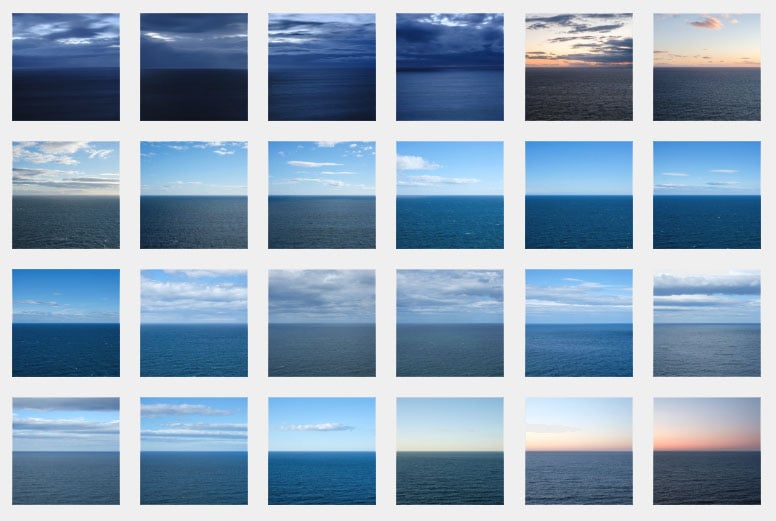 For some time now I’ve wanted to do a project which follows the light over this period. The longest day. The shortest night. To sit in one spot and photograph a simple composition of sea and sky as the light changed.

I knew that I wanted to shoot looking north, I didn’t want the sun in any of the images and also it had to be on a cliff above the sea with a clear, empty horizon. There were a few spots that I thought of — the north of Lewis, Durness/Cape Wrath, or the coastline near Peterhead. All miles away from me.

So, using Google Earth I found another spot which was reasonably close: St Abb’s Head. I’d never been there before but it looked ideal. Big dramatic cliffs and a clear view north over the sea to, well, nothing. Just a horizon. Perfect!

They say it never really gets dark in Scotland at the summer solstice. It does when it pours with rain at about 1:30am. Very dark and somewhat spooky, as the lighthouse beam swung round, cutting through the lashing rain. I was planning to camp, but on reaching the lighthouse it was so windy that I decided camping next to a cliff wasn’t a very good idea. So I tried to sleep in the car. A small car which shook in the wind like the back legs of a sh*tting dog.

Sleep didn’t come. The light gradually faded, the dark tucked in around me. The rain stopped, the clouds barrelled into the distance. Red sky glimmered in the north. A cargo ship slid by. The lighthouse beam began to illuminate less. The land lightened. The sky cleared. Night was over. A creel boat pitched on the waves. The birds awoke and noise surrounded me. The wind remained constant.

And every hour I went to the same spot on the cliff edge, pointed north and shot a frame. As the day rolled on the light began to change, hardening and flattening out shadows. Wave tips silvered and the horizon sharpened. Birds flew out to sea and returned. The clouds rolled back in, a grey lid over a grey sea. Then they began to break, finally relenting to the wind. Dissolving into smaller and smaller pieces until they were gone and all that was left above the horizon was color. About the author: Christopher Swan is an award-winning professional photographer from Glasgow, Scotland. Swan shoots architecture, landscapes, interiors, events, and weddings. You can find more of his work on his website, Facebook, and Instagram. This article was also published here.