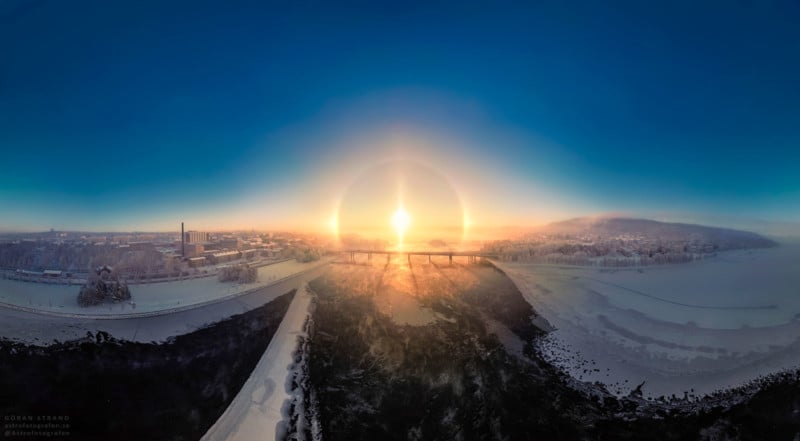 A photographer captured this beautiful solar halo to mark the winter solstice; the shortest day of the year in the Northern Hemisphere.

Göran Strand was leaving his office in Ostersund, Sweden when he noticed the halo was starting to show.

“I picked up my camera and my drone and drove to a spot where I knew I would get the city and the halo together,” he says.

“Solar ice halos are more common this time of the year during really cold weather when ice particles form in the air. This day we had -21 degrees Centigrade (-5.8 degrees Fahrenheit) at the moment I took these photos.”

The brutally cold weather made it difficult for Strand to operate his DJI Mavic 2 Pro drone.

“The hardest part is working in such cold weather, controlling the drone when your fingers freezing,” he says.

“Also the battery drain on the drone can be challenging in cold weather so you need to work quite fast.”

Stand’s efforts were rewarded with incredible photos and videos of the solar halo.

The photo was taken on December 17 when the Sun was close to its seasonal southern limit. The winter solstice was yesterday (Wednesday) marking the shortest day of the year in the Northern Hemisphere.

Remarkably, the photo was taken at noon local time with Earth’s star barely making it over the horizon in the middle part of Sweden.

“Naturally occurring atmospheric ice crystals can produce the tantalizing halo displays, refracting and reflecting the sunlight through their hexagonal geometry,” writes NASA which gave the photo Astronomy Picture of the Day.

“With the Sun low and near the horizon in the clear sky, likely sources of the ice crystals producing this intense halo are snow cannons.

“Operating at a local ski area, the snowmaking machines create a visible plume at the top of the nearby island Froson toward the right side of the panorama.”

The ski slope is on the right-hand side of the photo with the city of Ostersund over to the left.