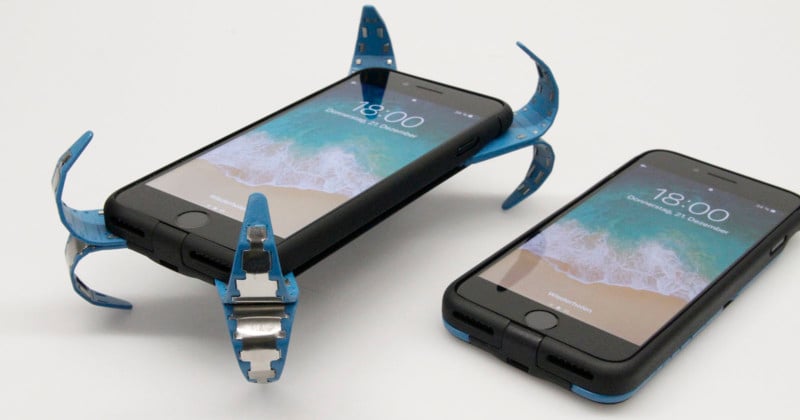 A mechatronics engineering student has invented a “mobile airbag” that automatically deploys when you drop a device, protecting it from harm.

Phillip Frenzel, a 25-year-old master’s student at Aalen University in Germany, came up with his idea after breaking his phone by throwing the jacket containing it over a banister. The impact caused the electronics inside the phone to break.

So, Frenzel began looking into developing a system to prevent dropped phones from breaking. While big and bulky protective cases exist, Frenzel wanted something smaller and more advanced.

After four years of tinkering, Frenzel created a “mobile airbag” that unfolds from the corners of a relatively-thin case when sensors detect that it’s in free fall.

The dampers are pushed into their “airbag” position with metal springs, and they help absorb the impact of the fall to protect a device’s screen and inner components. After being deployed, the dampers can be pushed back into the case, allowing it to be completely reusable.

Here’s a short video in which Frenzel demonstrates how the invention works:

Frenzel calls the invention an “AD Case,” in which AD stands for “active damping.”

The German Mechatronics Society was so impressed by Frenzel’s invention that it awarded him its national Mechatronics Prize for 2018. Frenzel has also since registered for a patent to protect his creation. He’s reportedly planning to commercialize the case starting with a Kickstarter crowdfunding campaign.

Perhaps one day a similar “airbag” device will be available for professional cameras and lenses as well.

Phottix Launches the Kali Studio LED Line with the Kali600