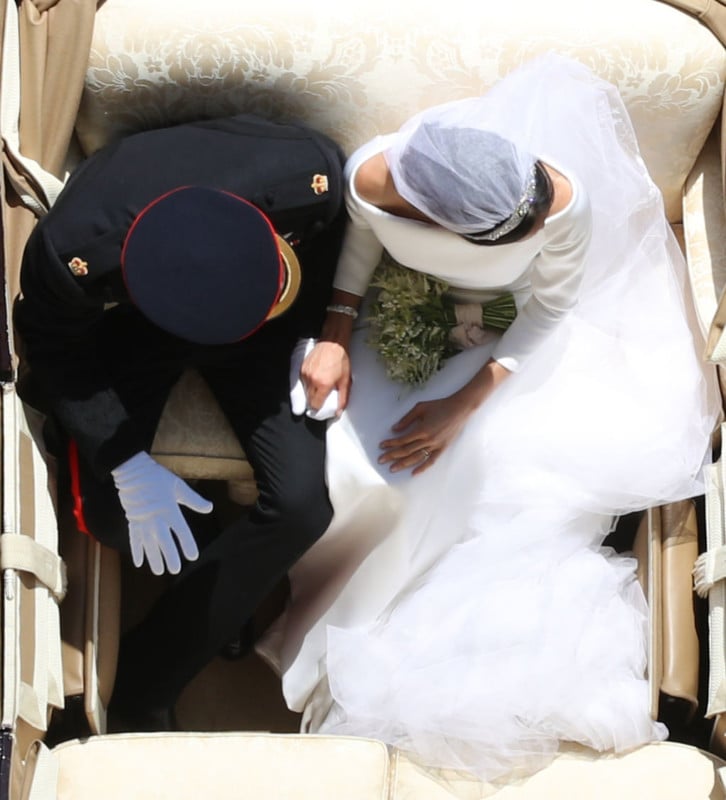 The royal wedding of Prince Harry and Meghan Markle captured the world’s attention this past weekend, and one particular photo received a huge amount of praise and viral popularity. Now the photographer has revealed details of how the picture came to be.

The photo above shows Prince Harry, Duke of Sussex and his new bride, the Duchess of Sussex, holding hands in a carriage during a procession after their wedding ceremony.

Shortly after it emerged, it began going wildly viral online:

I don't know who took this picture, but it's exquisite 💖👑 #RoyalWedding pic.twitter.com/yR60JWCdd1

Photojournalist Yui Mok, a Press Association (PA) staff photographer, soon identified himself as the person responsible for the image. Drones weren’t allowed anywhere near the wedding celebrations, so for this “aerial” shot, Mok actually positioned himself on the roof of a gateway at Windsor Castle to photograph the couple as they passed below.

Thanks, glad you like the photo. It was taken by myself, and I'm a staff photographer for @PA based in the UK. I was positioned on the roof of George IV Gateway of Windsor Castle, and they passed directly beneath me during their carriage procession. https://t.co/hkzViNhSbb

♫ Love and marriage, love and marriage, Go together like a horse and carriage ♫ A view of the happy couple from the top of the George IV Gateway at Windsor Castle. #PrinceHarry #MeghanMarkle #RoyalWedding pic.twitter.com/PmSL9E9iud

For that shot I used @CanonUKandIE 1Dx Mk2 camera and a 70-200mm lens. For other shots I had the @CanonProNetwork 600mm F4 (which is actually quite light for its size – just as well as I had to handhold it a lot of the time!) Drones would never have been allowed anywhere near.

Observers noticed that the couple forms a heart shape in the frame, but Mok says this was purely coincidental and not something he noticed while shooting.

Purely coincidental. I had less than a one-second window to take that particular shot – whilst having to focus through a metal grill I was standing over – so was happy to get anything really!

Mok also credited the photo editors at the PA picture desk for cropping and tidying up the raw photo that he rushed over.

I should also add a big thanks to the @PA picture desk, who crop and tidy up the raw images that we send to them directly from our cameras on big jobs like this, before they are issued to the wider world. They tend to be unsung, whilst photographers end up grabbing all the glory.

Mok says he never expected the photo to become so popular, that it has been shared widely on the Internet without credit, and that he gets paid a salary by PA regardless of how viral his photos get.

Thanks for your financial concern, but I am employed by @PA who pay my salary!

It's the internet – it happens all the time I'm afraid :( But thanks for the nice comments, and happy that the photo gives enjoyment to so many people. I never thought it'd be so popular :)

Mok is getting his fair share of attention now as his photo goes viral, and it will go down as one of the memorable images made of a wedding watched by millions upon millions of people around the world.

A $5 Shower Curtain Does Wonders for Diffusing Light