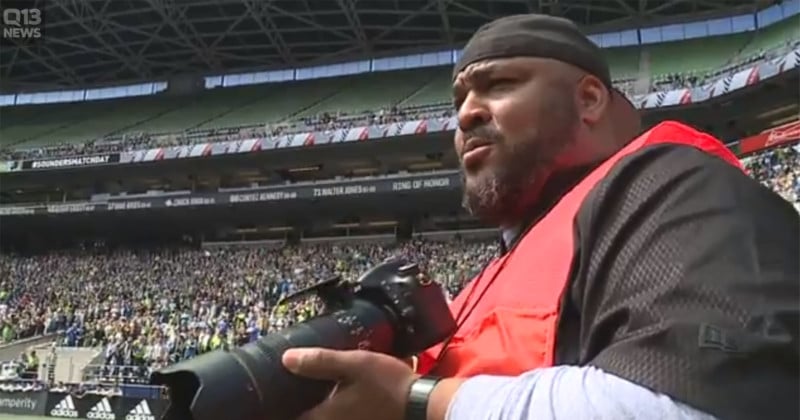 Walter Jones is a former NFL player for the Seattle Seahawks who was voted into the Hall of Fame in 2014, his first year of eligibility. After years of dominating other athletes, Jones now has a new passion: documenting them: he’s now one of the largest sports photographers you’ll ever see on a sideline.

The 44-year-old initially caught the photography bug through snapping family photos of his twin children growing up. Now he can be found on the field during pro sporting events, including at his familiar CenturyLink Field for the Seattle Sounders MLS soccer team.

Tough loss by the @soundersfc last night in Mexico. Looking forward to being back at @centurylink_field shooting on the 31st of the month though.

Congrats on the win last night, @therealstefan24frei! No goals allowed and the team advances to the next round of @concacaf Champions League. Question for you though, since I’m shooting the game this weekend. Which one is your best side? Need tips! 📸: @morenojosepr #GoSounders

Sorry Shuttleworth, but there was no stopping that shot. Sounders added another one. 2-0 at the 30th. #GoSounders

I think it was at this moment that @therealstefan24frei either waved hello, told me I was too loud out there, or asked me to stop taking pictures of him. Either way, great win today, @soundersfc! Way to come away with 3 valuable points. Link to all my pictures in the bio.

Sidestepping that Monday responsibility like @nicolaslodeiro sidesteps getting smacked. #SurvivalMondays

You can find a selection of Jones’ photography in this online gallery.

Jones joins a number of other notable current and former athletes who have big passions for photography, including Hall of Fame baseball players Ken Griffey Jr. and Randy Johnson, as well as current NFL player (and future Hall-of-Famer) Larry Fitzgerald.

This Polar Bear Wants to be a Wildlife Photographer