An Ohio newspaper photojournalist was shot by a police officer last night after the cop mistook the camera and tripod the photographer was holding for a rifle.

The New Carlisle News reports that its photographer Andy Grimm was shot by Clark County deputy Jake Shaw at around 10 p.m. last night while he was trying to shoot some photos of a traffic stop.

Grimm had left the office late at night to shoot photos of lightning when he came across the traffic stop. He pulled into a nearby restaurant parking lot and pulled his camera and tripod out of his car to shoot some photos when suddenly gunfire rang out. Shaw had opened fire, hitting Grimm in the side.

“I was going out to take pictures and I saw the traffic stop and I thought, ‘hey, cool. I’ll get some pictures here’,” Grimm tells the New Carlisle News. “I turned around toward the cars and then ‘pop, pop.'”

“I immediately dropped to the ground, and I saw the deputy and that’s when I realized ‘oh man, he shot me’,” Grimm tells FOX45. “He came running over and said ‘oh I thought that was a gun.'”

Grimm says he was given no warning before the shots were fired, and that he was simply trying to do his job. The photographer was rushed to a nearby hospital for surgery and is expected to make a full recovery, the New Carlisle News reports. 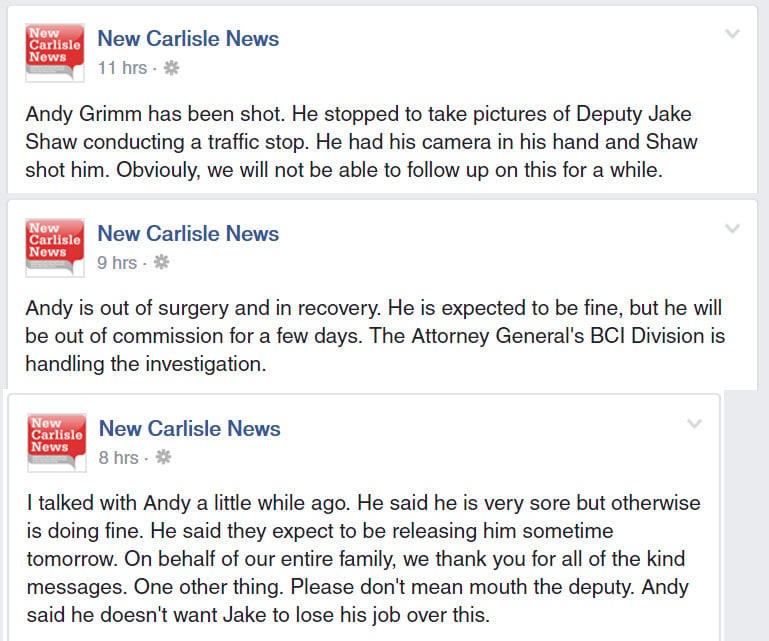 Andy Grimm says he was shot twice by a Clark Co. deputy–the first grazed his shoulder and second hit near his rib cage. @ABC22FOX45

Grimm says he isn’t mad at Shaw and doesn’t want Shaw to lose his job over the incident, which is now under investigation.

Update on 9/7/17: Body camera footage of the shooting has been released by the Sheriff’s office.

A Special Effects Makeup Shoot With a Pre-Release Nikon D850