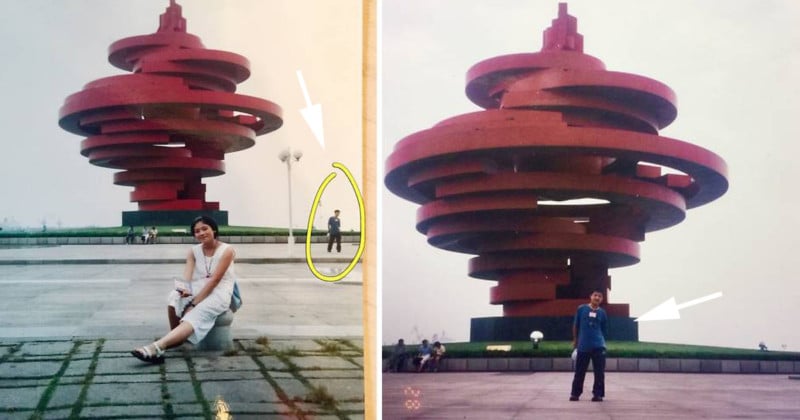 A married couple in China recently discovered that they had unknowingly been captured in the same photo as teenagers, 11 years before they met and fell in love.


Channel NewsAsia reports that a Mr. Ye and Ms. Xue had met and fallen in love in the city of Chengdu in 2011.

While going through Ms. Xue’s old family photos earlier this month at his mother-in-law’s house, Mr. Ye came across a photo of his wife visiting the city of Qingdao as a teenager. Upon seeing the snapshot, Mr. Ye instantly recognized himself in the background.

“When I saw the photo, I was taken by surprised and I got goosebumps all over my body… that was my pose for taking photos,” Mr. Ye tells Sina News. “I also took a photo, it was the same posture (as captured in Ms Xue’s photo), just from a different angle.””

He had visited the exact same location at the exact same time while with a tour group. What’s more, they were posing for different pictures at exactly the same moment on July 2000.

Ms. Xue had visited Qingdao to help her mother relax after undergoing an operation a few months earlier. Mr. Ye had been visiting May Fourth Square in Qingdao because his mother had taken ill after booking herself the trip and asked her son to go in her place.

Qingdao and Chengdu, cities of 9 and 14 million people (respectively), are separated by over 1,100 miles and it takes over 20 hours to drive between the two cities.

The couple’s photos have gone viral in China, where people are pointing to the pictures as evidence that the two were destined for each other.

(via Channel NewsAsia via Fstoppers)