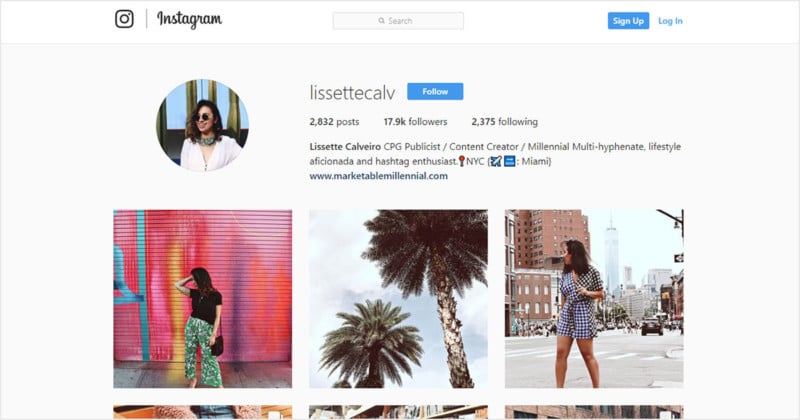 How much does it cost to live the life of the Instagram famous? Answer: a whole lotta money. One woman in New York found that out the hard way after she went $10,000 into debt trying (and failing) to become an Instagram celebrity.

The New York Post reports that after moving to New York in 2013 for an internship, the now-26-year-old Lissette Calveiro began living above her means to shoot photos of an “Instagram-worthy life.”

Calveiro reportedly spent $200 every month on clothes so she wouldn’t be photographed in the same outfit twice, and she also purchased a designer product (e.g. a $1,000 handbag) every month to show off in her portraits.

Today was a #TREATYOURSELF kind of day.

“I wanted to tell my story about this young millennial living in New York,” Calveiro tells the NY Post. “I was shopping… for clothes to take ‘the perfect ’gram.’”

But it’s not just clothing and accessories: Fashionista crunched the numbers and estimates that it costs $31,400 per year (or ~$2,600 per month) to have maintain a face and figure on par with Insta-celebs — this includes services like facials, injections, personal training, dental services, and meal delivery…

And to portray herself as a jet-setter, Calveiro traveled to new locations every month for a year — places such as Vegas, LA, and the Bahamas.

That's a wrap, #Miami! Thank you for the new memories in a place that was always old, and for reminding me the power of being close to family. I appreciate you, but home is where the heart is and my heart says it's time to take a leap of faith in myself. Thank you all for supporting my journey and engaging with me day by day. I am truly blessed for everyone in my life – even those who came and went, but taught me what I needed to know at the right time. (alright, last long and sappy 'gram) 🌞

Stateside and looking forward to the days of reflection to come. #Cuba, you have my heart forever.

“Nobody talks about [his or her] finances on Instagram,” Calveiro tells the newspaper. “It worries me how much I see girls care about image. I had a lot of opportunities to save. I could’ve invested that money in something.”

Look both ways before you cross my mind.

Calveiro started toning down her life near the end of 2016, becoming much more frugal with her finances. This allowed her to pay off her debts in about 14 months, the NY Post reports.

After her years of spending and shooting photos, Calveiro has about 18,000 followers on her Instagram account at the time of this writing — far short of the six-, seven-, eight-, and nine-figure followings of “real” Instagram celebrities.