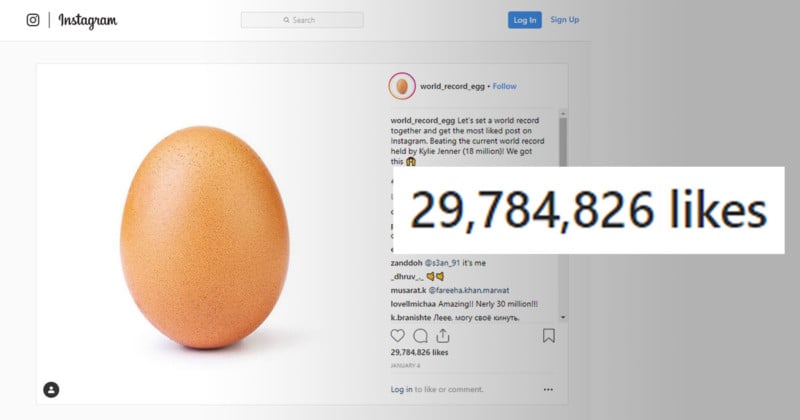 Move over Kylie Jenner: your record for the most-liked Instagram photo of all time has been overtaken… by a random photo of an egg.

“Let’s set a world record together and get the most liked post on Instagram,” the caption read. “Beating the current world record held by Kylie Jenner (18 million)! We got this 🙌”

Let’s set a world record together and get the most liked post on Instagram. Beating the current world record held by Kylie Jenner (18 million)! We got this 🙌 #LikeTheEgg #EggSoldiers #EggGang

The record referenced was set by a photo celebrity Kylie Jenner posted shortly after the birth of her daughter, Stormi Webster, in February 2018:

The egg photo quickly went viral, and in less than two weeks it has somehow amassed over 3.3 million followers for the account and over 29 million likes for the photo.

In other words, the egg has smashed Jenner’s photo with over 60% more likes at the time of this writing (and it will undoubtedly end up with much more as word continues to spread).

While the identity of the person or group behind the egg account has yet to be uncovered — perhaps it’s clever marketing for the egg industry? — some media outlets have been about to get in touch with the creator.

“While doing dry January I was sitting at home reading an article online about the top 20 Instagram posts of 2018,” the account holder tells ABC in an email. “I thought it would be an interesting experiment to try and beat the record with something as basic as possible.”

“[T]he internet is amazing. But it wasn’t me that achieved it, it was the Egg Gang. I guess it’s also a comment on celebrity culture and how fragile and easily cracked it is (pun intended). But really I just thought it would be funny if something as simple as an egg could take the crown.”

Update on 2/6/19: The New York Times has revealed that the brainchild behind this Insta-famous egg is 29-year-old London-based advertising creative Chris Godfrey.

Friends Through Flames: Camaraderie on the Front Lines of Wildfire Photography