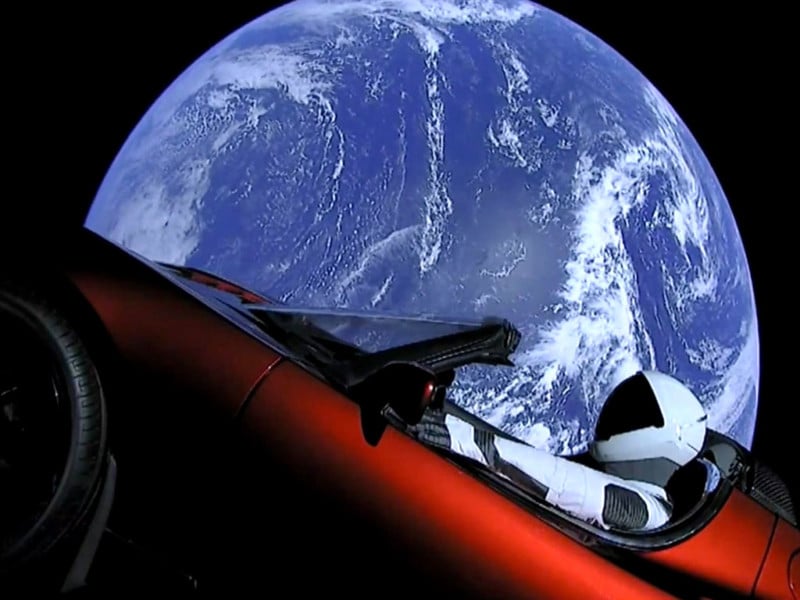 We live in an amazing time in which it’s actually possible to shoot a photo like this one: it’s a Tesla Roadster sports car flying through space with the Earth in the background.

After successfully launching and reaching space, the photo above is one of the still frames captured by the multiple onboard cameras.

There’s even a live camera feed of the Tesla’s journey:

“It is hoped the car will be thrown into an elliptical orbit that stretches out to Mars’ orbit around the Sun,” SPACE & UNIVERSE writes. “The car will take at least six months to travel the 200 million miles to Mars.”

The car will be playing the song “Space Oddity” on repeat as it continues on its billion-year elliptic Mars orbit.

View from SpaceX Launch Control. Apparently, there is a car in orbit around Earth. pic.twitter.com/QljN2VnL1O

Over 10,000 people are currently watching the live stream at the time of this writing, and photos of the Tesla in space are going viral across the Web and world.

Tesla has an advertising budget of exactly $0.

Update: It seems the Roadster overshot its intended Mars orbit and is instead headed towards the asteroid belt: