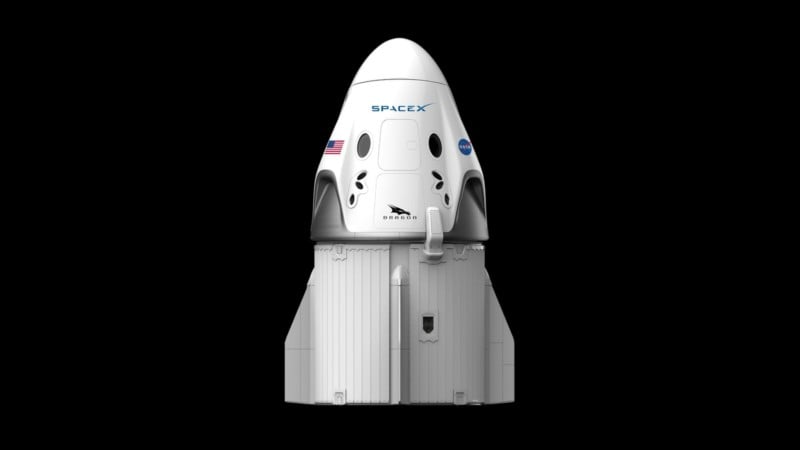 This is the SpaceX Crew Dragon capsule, sitting on its cargo-carrying “trunk”. The dragon will (God willing) carry two astronauts to the International Space Station (ISS) this Wednesday.

The capsule will be locked onto the nose of a SpaceX Falcon 9 rocket, pictured here blasting off from Florida’s Merrit Island in January 2020.
Since 2011 NASA has paid Russia up to $86 Million per head to send its astronauts into space after America’s eye-wateringly expensive Space Shuttle program was closed down.

The sci-fi interior of the Crew Dragon. The capsule will be able to seat up to seven space travelers.

In 2008, SpaceX founder Elon Musk said “Dragon was actually named after [the 1960s song] Puff The Magic Dragon because so many people thought I must be smoking weed to do this venture.” Some of the song’s lyrics may hint at drug use.

The Crew Dragon is built on the design fundamentals of SpaceX’s first Dragon capsule (pictured) which has been flying unmanned resupply missions to the ISS since 2012.

The sexiest update to the new Dragon capsule are eight SuperDraco thrusters (seen here in full blaze during a 2015 test) capable of launching the vehicle at missile speeds away from its Falcon 9 rocket.

The SuperDracos will blast the Dragon to safety if the Falcon 9 malfunctions in flight or on the launchpad. SpaceX will fuel their Falcon 9 on the Launchpad with the Dragon astronauts inside.

Combo photo showing the Crew Dragon exploding away from its rocket in a January 2020 test. Parachutes carried the unmanned capsule to a safe splashdown off the Florida coast.

The upcoming launch will carry veteran NASA astronauts and close buddies Bob Behnken (left) and Doug Hurley to the ISS. Hurley, whose call sign is “chunky”, is a former U.S. Marine Lieutenant and military test pilot. Behnken is a Colonel in the U.S. Air Force who piloted the F-22 Raptor stealth fighter jet.

A demo of the spacesuit designed for the Crew Dragon capsule.

The single-piece suit comes with boots that clip snugly into the Dragon’s seats, a flame-resistant Teflon outer skin (the white material), and touchscreen-friendly fingertips.

Behnken and Hurley in their suits during a training exercise.

Musk hired the costume designer from 2016 film Batman Vs. Superman to style the spacesuit. The SpaceX founder said “[It] was incredibly hard to balance aesthetics and function. Easy to do either separately.”

The Dragon is the first spacecraft to make extensive use of touchscreens for flight controls. Behnke says after a lifetime of flying with physical controls “the answer for all flying is not to switch to a touchscreen. But for the task that we have, and to keep ourselves safe flying close to the ISS, the touchscreen is gonna provide us that capability just fine.”

A 1999 photo showing the hundreds of physical controls in the cockpit of space shuttle Atlantis, the last of America’s vehicles used to send astronauts into orbit. Touchscreens allow engineers to make swift changes to the control interface through software updates, without requiring buttons and switches to be stripped out and reconfigured.

The Dragon Crew and trunk photographed on the launchpad in 2019. The black and white trunk is fitted with a solar panel and fins that would stabilize the capsule if the SuperDraco thrusters explode into action. The unpressurized trunk carries less delicate cargo.

The unmanned Dragon approaching the ISS during the March 2019 test flight. The integrated solar panel design marks another departure from older space capsules that use fragile solar arrays that unfold like wings once in orbit.

If the Crew Dragon rocket successfully reaches orbit on May 27 the Falcon’s first stage booster (pictured here moments before landing in 2016) will break off, spin around, then plummet towards a drone ship in the Atlantic Ocean to land in a puff of smoke. The smaller second stage will be dumped into the ocean.

A Falcon 9 booster being returned to base on its drone ship after a successful 2019 landing. 81% of SpaceX’s ocean landing attempts have been successful.

A cargo Dragon capsule slamming into the sea in 2015.

After an unspecified period aboard the ISS, astronauts Behnken and Hurley will return to earth by undocking from the ISS, dumping the Dragon’s trunk (which will mostly sizzle up on re-entry to the atmosphere) then blazing through the atmosphere at nearly eight kilometers per second, to drift down to the ocean off the east coast of Florida on parachutes…

…to be plucked out of the waves by a SpaceX boat.

The Dragon capsule, which will look like a toasted marshmallow after its scorching reentry, will not be used again for human spaceflight but may serve again to carry cargo.

Although a successful Crew Dragon mission will mark a new era of self-reliance for America, the relationship between NASA and its Russian counterpart Roscosmos looks set to continue.

Guy Pushes Photographer Into Pond, or: Why You Should Insure Your Gear

How to Straighten a Photo Perfectly Using Lightroom and Photoshop